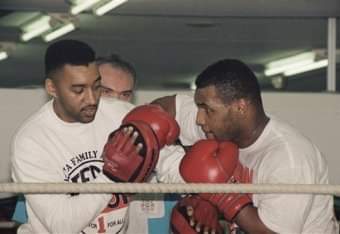 Boxing trainer Aaron Snowell (Photo Snowell Facebook) is by far and away best known for working with heavyweight king Mike Tyson – But, as you will learn from the following interview, there really is so much more to Snowell than the time he spent with “Iron Mike”.

In fact, during his long and distinguished career, Snowell has worked with: Frankie Randall, Tim Witherspoon, Julian Jackson, Ricky Parkey and a number of others. Having cut his teeth as the assistant to legendary fight figure and trainer Slim Robinson and having spent precious time at Deer Lake with the one and only Muhammad Ali, Snowell really is a man who has spent his life around boxing.

We began by talking about the Feb. 22 stunner pulled off by Tyson Fury over Deontay Wilder. But Snowell was not shocked:

Q: What did you think of Tyson Fury’s stoppage of Deontay Wilder? Were you shocked?

Aaron Snowell: “I wasn’t shocked. Tyson Fury is a great champion. He’s a former undisputed champion, who beat a real reigning champion the first time he became champ, in Wladimir Klitschko, and he showed us what he’s made of on Saturday. He’s had his struggles and he showed his strength, his inner strength. The first fight [with Wilder] he was winning but he got caught but he knew he could do better and he proved it. He showed his greatness.”

Q: Is Fury a great? A future Hall of Famer?

A.S: “Oh, he’s definitely a Hall of Famer. What a great fighter does is, he makes adjustments, from a loss or from a bad performance, and he comes back. Fury did that. Wilder is a devastating puncher and a great counter-puncher. But he is 34 or nearly 35 years old, and age caught up with him – and the other guy in front of him helped him grow old. Fury gave him an absolute butt-kicking, that’s all you can really say! The thing with Wilder for me is, I hope he doesn’t go to a dark place and get down and depressed. That’s what happens with some of these guys when they lose for the first time; especially punchers. I hope he can come back.”

Q: Talking about you: when did you first get into boxing, as a trainer – how old were you?

A.S: “I was a teenager. I was Slim Robinson’s assistant and I was there with greats like Willie The Worm Monroe, Cyclone Hart, Eddie Mustafa Muhammad. I was just a kid when I was at Deer Lake with Ali. He was great. He met me and my family and he asked us what we wanted to be and he told us we could do anything if we worked hard and believed in God. We were all in an ice cream commercial with Ali. I remember I was there just before he left to go to Zaire to fight Foreman. Nobody was giving Ali a real chance. He asked us what we thought, and we said, ‘you’re gonna knock him out!’ Anyway, Ali took little things like that, and he built on them. He really did. And then, a day or so before he left for Africa, he came to my school, and he put on this great exhibition and he and I rapped! I still have the clippings. He really was special. He never wanted to tread anyone down, only to build them up.”

Q: You went on to work with so many greats, but Frankie Randall might have been your most underrated fighter. First of all, how is Frankie today?

A.S: “I still talk with Frankie. He’s now fighting the exact same thing that Ali had to fight – Parkinson’s. His son came out and spoke about it recently. I knew what was going on but I was asked not to talk about it. But overall, Frankie looks well, he’s doing good. The night he beat the great [Julio Cesar] Chavez, that was the first fight at The MGM Grand. That was a great night for me as trainer, in the corner.”

Q: We wish Frankie all the best. Talk about your time with Tyson.

A.S: “Tyson was undoubtedly one of the greatest fighters ever. In history, of all-time. He lived up to his errors, yes. The Buster Douglas fight, he was dealt a bad night. Sometimes a great fighter gets a chance to show his greatness and the other fighter doesn’t. Buster, on that night, he climbed the mountain higher and his greatness was shown. Tyson never had the chance, the opportunity, to rectify his mistakes – in a rematch. He never got that chance. But Tyson, when he trained hard – and he really was one of the hardest-working fighters, athletes, ever – he could really fight, as he showed in his comeback fights after Douglas. Henry Tillmam, who beat Mike twice at amateur level, Mike made the adjustments and crushed him. In the Razor Ruddock fights, Mike showed he could fight, in a bombs away style. When he was right, no-one could beat him.”

Q: The loss to Douglas was a real stunner. Do you feel like you were made to be something of a scapegoat in Tokyo – what with the enswell issue and all?

A.S: “That all goes with the territory. With a great win comes great accolades. With a loss comes criticism. That’s part of the game. I was head trainer and I take all the blame. The cutman, like you say, with the enswell issue – he never had his stuff with him. I take blame for that. We win together and we lose together. That’s it. But as I say, Mike Tyson never had the chance to put his mistakes, our mistakes, right. Buster never gave us the rematch even though he told us he would.

“But Tyson won that fight anyway. The referee messed up the count and that’s it. But Buster, in his next fight, with Holyfield, he felt the pressure, the enormous pressure, and it was his turn to stand up. So yeah, if Tyson had been given the opportunity [of a rematch with Douglas] you would have seen a Tyson that was really second to none. Oh, how hard Mike would have trained for that fight.”

Q: You have clearly had so many great nights. Which would you list as your best as a trainer?

A.S: “There are so many memories. The night Tim Austin won the [IBF] bantamweight title with a broken jaw (in 1997). That was special. When Tim Witherspoon knocked out James Quick Tillis, with Angelo Dundee in the opposite corner – me just a kid. That was my first title (the NABF heavyweight belt won by Witherspoon). When I trained Rickey Parkey to win the IBF cruiserweight title by beating Lee Roy Murphy, and he [Parkey] scored an eight-second KO over Broderick Mason, which is a record for the fastest ever KO – December 11, 1984, in Atlantic City. Maybe it was the night Julian Jackson took out Terry Norris in one round, that was very special. They’re all special memories.

“But you guys in the U.K, this is your hour, your chance to have the biggest heavyweight fight ever! Fury versus Joshua, for all the belts, they have to make this happen. No way can they not!”