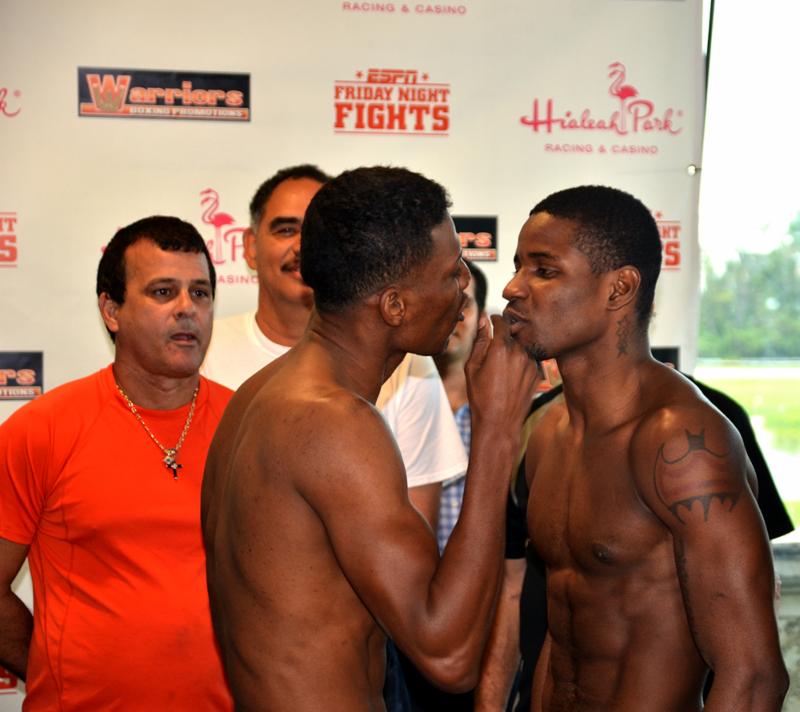 ABOUT THE FIGHTS – In the main event, Colombian Breidis Prescott (27-6, 20 KOs) is scheduled to fight Ghanaian Fredrick Lawson (23-0, 20 KOs) a 10-round Welterweight bout.

In 2008, Prescott made headlines by knocking out Amir Khan in the first round of their lightweight contest. However, he has since suffered several losses, including a TKO at the hands of Mike Alvarado in 2011 and a unanimous decision loss to Terrence Crawford in 2013. Conversely, Khan has largely resurrected his career since the KO, including wins against Marcos Maidana, Paul Malignaggi, Marco Antonio Barrera, Zab Judah, and Devon Alexander.

In 2015, Prescott fights to keep his career alive while Khan campaigns for a Pay-Per-View headline. Prescott now uses the success and popularity of his 2008 KO victim [Khan] as motivation for his own comeback. The Colombian hopes to put his career back on track with a victory against Lawson and predicts a win by knockout within the first six rounds of Thursday’s bout.

Lawson comes into the bout undefeated but untested.

In 2014, Barthelemy was awarded a KO victory after a short, one-sided bout against Argenis Mendez for the IBF Super Featherweight Championship.

However, celebrations were short-lived as the KO was overturned after video review confirmed that the KO was the result of an illegal punch. Ultimately, the bout was declared a “No Decision” and the pugilists met six months later. In the rematch, Barthelemy won a unanimous decision and [finally] took home the IBF belt.

In total, there will be eleven bouts on the card at Hialeah Park Casino. Other fighters include middleweight Antonio Tarver Jr. (1-0, 1 KO), heavyweight Yasmany Consuegra (16-0, 14 KOs), and knockout artist and local favorite Ahmed “The Egyptian” Elbiale (8-0, 8 KOs). Untelevised undercards will begin at 6:00pm. Televised bouts will be broadcast on ESPN2 at 9:00pm.

Bill Barner is a former certified “USA Boxing” Judge, Referee, and Trainer. He is a former sparring partner for several amateur and professional fighters and currently practices criminal and immigration law in South Florida for BarnerRossen PA. He has appeared in The Ring Magazine, Bleacher Report, VOICE Magazine, Youngstown Vindicator, USABF, and is a regular contributor to East Side Boxing. He can be reached at barner@barnerrossen.com or on twitter @BarnerBill.