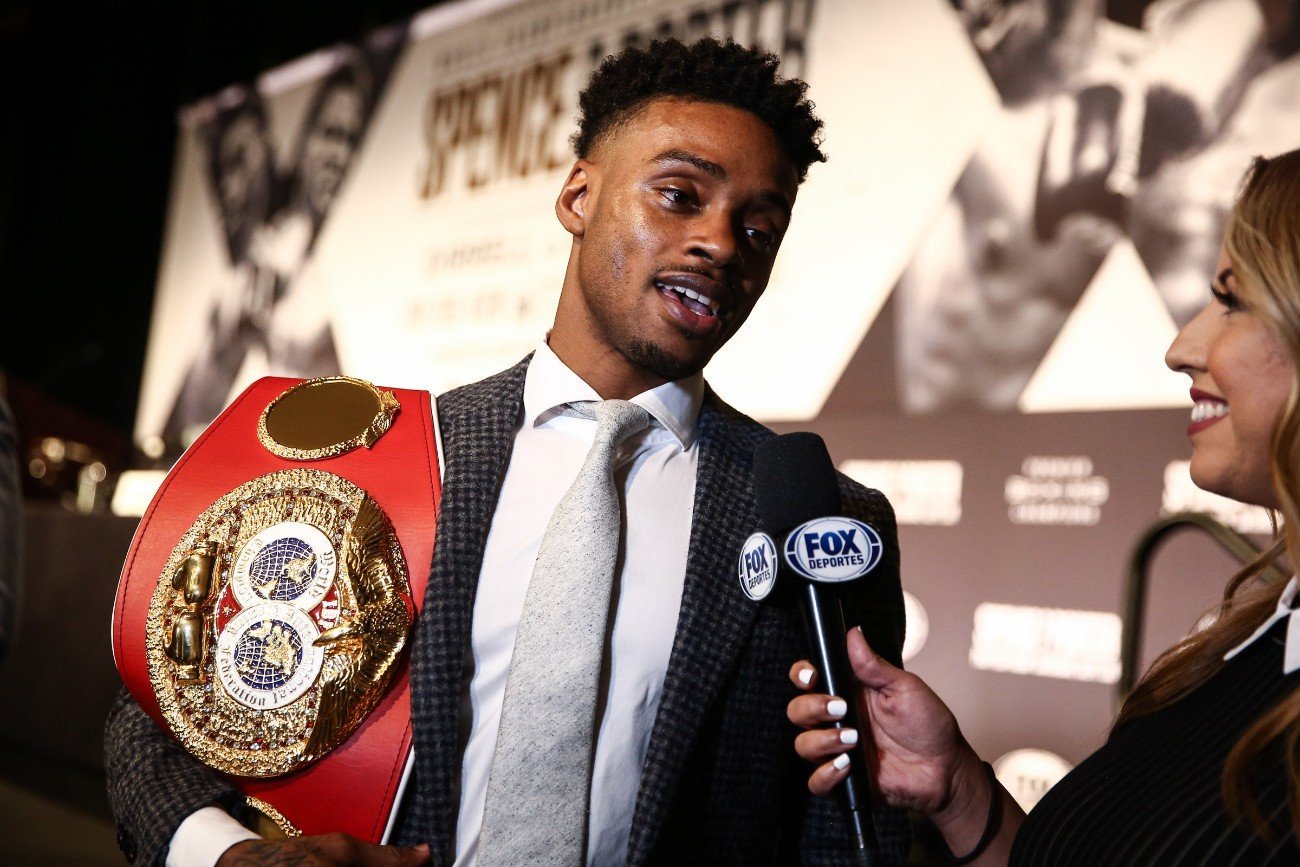 Errol Spence Reveals He Went Up To 192 Pounds After Car Crash, Says Getting Back In Shape “The Toughest Part”

Errol Spence and Danny Garcia are both eagerly looking forward to their November fight, with both men coming across as extremely confident of winning what is to some the most interesting big fight of the year. The two welterweights spoke on PBC on Fox last night and both men came out with some interesting stuff.

Spence, who will of course be having his first fight back since suffering that near-death experience of a car smash last October, revealed how his weight went up to 192 pounds after the accident. Spence said he got back into training three months after the crash, even when he was still sore. Spence says getting back in shape “was the toughest part.” Spence as we know is a big-for-the-weight 147 pounder and it is to be hoped for his sake that he hasn’t weakened himself, or doesn’t weaken himself, by getting back down to 147.

There is still a fair way to go before the fight – well over two months in fact – so assuming Spence hasn’t outgrown the division he should be okay. Of course, we are all wondering how the car accident affected Spence, if it has taken anything away from his fighting ability – the ability to take a shot for example. Certainly, Spence could have picked a far easier first fight back after well over a year out, after all he went through in rehabilitation.

That said, Spence, 26-0(21) feels he has way more stuff in his arsenal than Garcia has in his, that he will be too versatile for the former two-weight champ.

“I go so many gears. I can box, bang, sit there. I can use angles,” Spence said. “Danny only has one gear. Counter-punch and be patient. With me, he’s got to train for everything that’s going to happen in the fight.”

“I’m going to have to disagree with that,” Garcia responded. “I can outbox the sluggers and out-bang the bangers. I’ve faced the hardest hitters and my chin stood up to the test. I fought the fastest fighters and I beat them because I was better, not just because I was a counter-puncher. For this fight, I feel like this is it for me. I’m seasoned now, I’ve been in a lot of tough fights. I feel good. I feel like my career is where I want it to be and I feel better than ever.”

Had these two met when they were originally set to fight, before Spence flipped his car, “The Truth” would have entered the ring as a prohibitive favorite to win. But now, after all, that has gone on, with so many questions attached to the fight as a result, a case could be made for this one being a pick ’em affair. We just don’t know how Spence is going to be when bell-one rings.

Credit goes to Spence for taking a risky fight, a real fight, on his return. But Garcia will no doubt be thinking Spence has made a bad error in judgment. Plenty of fans cannot wait for this one.

“We Gotta Clean This Sport Of Boxing Up,” Says Floyd Mayweather – “It’s Too Many Belts”913 Total Shares

“We Gotta Clean This Sport Of Boxing Up,” Says Floyd Mayweather – “It’s Too Many Belts”913 Total Shares