So much for ring rust. Errol Spence, in his first fight in 16 months, looked superb last night in stopping a game and tough Yordenis Ugas to unify three welterweight titles. Sharp, strong, and powerful, Spence drilled Ugas with body shots and with uppercuts to the head, busting up the Cuban’s eye, finally getting the TKO win in the tenth round of a fight that saw both men raise their game.

Now perfect at 28-0(22) and the holder of three of the big four as far as belts go at 147 pounds, “The Truth” needs one man and one man only to complete his dominance. And Spence called out the man in question post-fight: 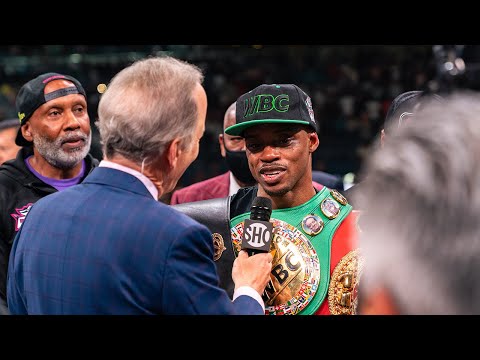 “Everybody knows who I want next,” Spence said. “I want Terence Crawford next. That’s the fight that I want. That’s the fight everybody else wants. Like I said, I’m going to get these straps then go over and take him too. Terence, I’m coming for that belt!”

Crawford, also unbeaten, at 38-0(29) is, of course, the WBO champ and a fight between him and Spence has been talked about for years. Now, here in 2022, the time seems perfect for the fight to finally take place. No excuses, no reasons not to make the fight. It HAS to happen.

In defeating Ugas, Spence looked great yet he didn’t have things all his own way. In round six, Ugas knocked Spence’s mouthpiece out, and Spence, thinking there had been a time-out called, lowered his guard and walked over to the lost mouthpiece. Ugas duly cracked his rival with two shots to the head and Spence looked somewhat buzzed. Spence did finish the round strong, however. Still, if there is anything to be criticized about Spence’s performance last night, that sixth-round incident is it.

“I made a rookie mistake,” Spence said later. “You’re supposed to protect yourself at all times and I didn’t do that. I wasn’t out on my feet. I turned and looked at my mouthpiece and he hit me.”

The rookie mistake aside, Spence was excellent last night. Excellent enough to beat Crawford? This is the question so many of us fans have been asking for years. We need an answer. We’ve waited long enough. Spence has made it clear he wants the fight and he wants it next. Crawford, who was last seen looking brilliant in stopping common opponent Shawn Porter, now has to show us all that he wants it just as much as Spence does.

Crawford did appear to do just that in taking to social media moments after last night’s fight had ended: