Announcer Al Bernstein is predicting that Errol Spence Jr is going to be going downstairs to the body of Terence Crawford and landing some hard shots when the two welterweight champions meet up.

Bernstein believes that Spence (28-0, 22 KOs) will be targeting the midsection of the 34-year-old Crawford from the first second of the first round, making it tough for him.

Crawford is difficult to hit with headshots, but it could be a different story when it comes to his body. Those types of shots are harder to dodge unless Crawford stays on the outside and moves all night.

That’ll make it hard for Crawford to win the fight because he’s got to stay in the pocket if he wants to win a decision against Spence.

WBO 147-lb champion Crawford (38-0, 29 KOs) has never faced a body puncher during his long 14-year professional career, and it’s going to be fun to see how he reacts to getting hit consistently by Spence.

“I’m hoping that fight gets made. If it does, I’m pretty sure I’ll be announcing it. That’s one of the questions when I look at the video & dig in; I’m going to have to answer in the keys to victory and all those things.

Read:  Terence Crawford Wants To Fight In England, Says “The UK Support Boxing More Than The US”

“The one thing that’s probably underestimated about Crawford is that while he’s a really good boxer, he’s got pop as well. For Crawford, the prototype fight was the Shawn Porter fight against Errol Spence.

“That’s probably the one fight he looks at and says, ‘If I can duplicate some of those things and do it on my level, I can get the win.’ We’ll see.

“Of course, Spence, who fought a terrific fight against [Yordenis] Ugas after coming back another long layoff, he’s going to go downstairs to that body from the first second of the fight. It should be great,” said Bernstein. 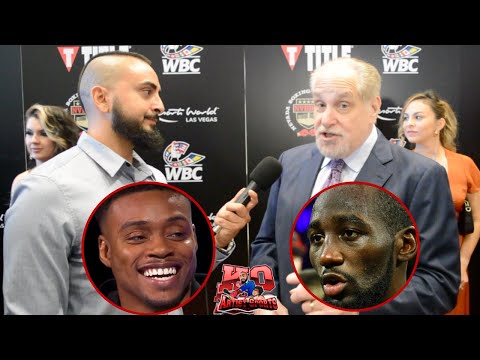