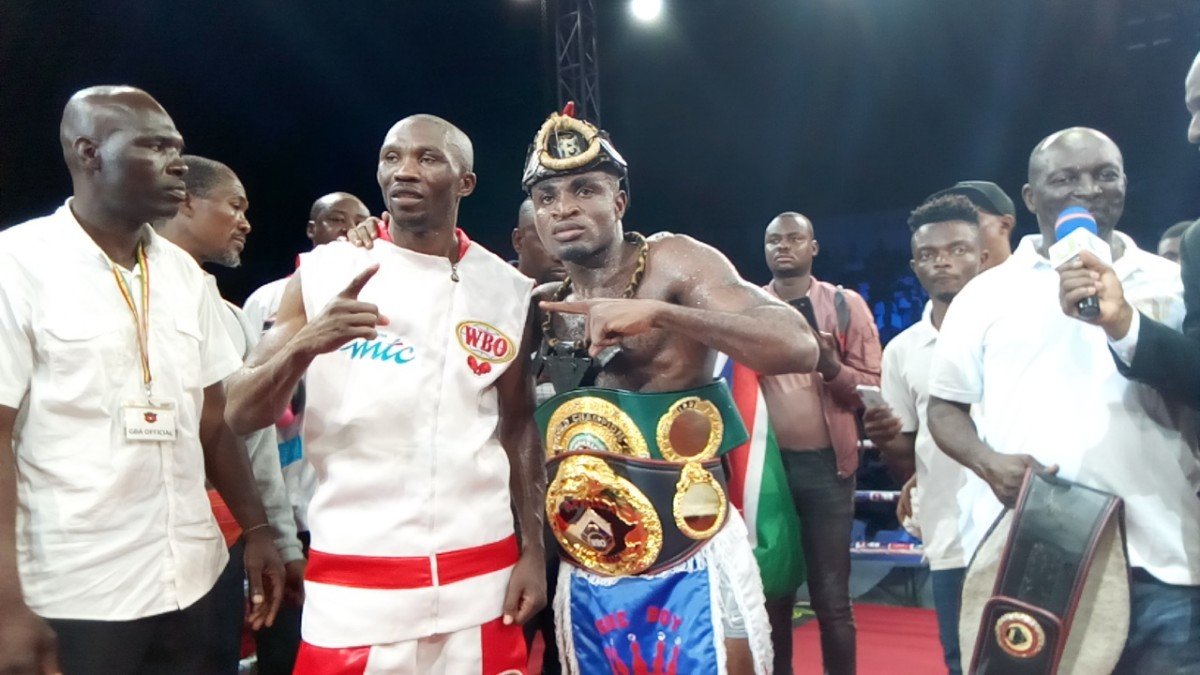 Emmanuel ‘Game Boy’ Tagoe of Ghana did not need to exert any sweat to outpoint Namibia’s former world champion, Paulus Moses, winning every round in Accra on Saturday night to annex the WBO Africa lightweight title on unanimous points for the 29th straight victory of his now 14-plus years professional career.

Tagoe, until recently the IBO lightweight champion controlled the fight all night and maintained the upper-hand throughout even though he didn’t need to do much work himself against a rather unimpressive Moses, in the end the verdict of the three ringside judges said it all, 120-110, 120-109, 120-109 it read at the end of a pulsating main event of Asamoah Gyan Fight Night 1 at the Bukom Boxing Arena in the Ghanaian capital.

It ensured Tagoe, managed and promoted by Ghana national football team captain, Asamoah Gyan, improved his career record to 29-1, 14 KOs and scaled the first hurdle of his agenda to win the WBO world title currently in the grasp of Jose Pedraza, the Puerto Rican who incidentally conquered Mexico’s Raymundo Beltran in August to win his second world title. Beltran had defeated Paulus Moses (falls to 40-5, 25 KOs) back in February to claim the then vacant title himself and now the 40 year old Namibian who won the WBA lightweight world title way back in 2009, is calling it quits following the defeat to Tagoe.

“Congratulations to Emmanuel Tagoe, he is a good boxer and let me reveal this secret, this was my last fight. You know I’m 40 years old now and I was two times a world champion so I think I did a lot with my life. Now I hand the baton over to Emmanuel Tagoe so congratulations and keep Africa’s flag up,” a very candid Moses explained at ringside post-fight.

Tagoe who had former teammates of Asamoah Gyan in the national team, Stephen Appiah, Sulley Muntari, Laryea Kingston and Godwin Attram showing up to celebrate with him in the ring, was equally gracious in hailing the great career Paulus has had and accepted the challenge to climb higher in pursuit of world championship glory for himself, his management and country.

“First of all, let me give thanks to God almighty for this good victory he has given me. I’m also grateful to Ghanaians for their support and I dedicate this title to them because before the fight, I promised to win for them because I realized Ghanaians love me. They saw that I had talent that I was joking with and they spoke about it that they didn’t like it and it motivated me to work harder,” the Ghanaian nicknamed Game Boy told ring announcer, Mohammed Amin Lamptey.

“Let me also express my appreciation for the effort of my opponent, Paulus Moses because he is a 2-time world champion who gave me a chance and to my coach, Adama Addy I’ve already submitted myself to listen to everything he says because he’s a 2-time world champion coach and he should guide me with his good work for us to show to Ghanaians that getting him to work with me is like winning the lottery,” Tagoe said.

In other exciting fights on the undercard of the maiden Asamoah Gyan Fight Night, Robert ‘Stopper’ Quaye lived up to his name by inflicting severe punishment on the man ironically nicknamed ‘Punisher,’ Kpakpo Allotey before stopping him in round 9 of their Ghana super lightweight title clash to improve his perfect career record to 16-0, 13 KOs whilst Allotey suffers the first defeat of his career and falls to 12-1, 9 KOs.