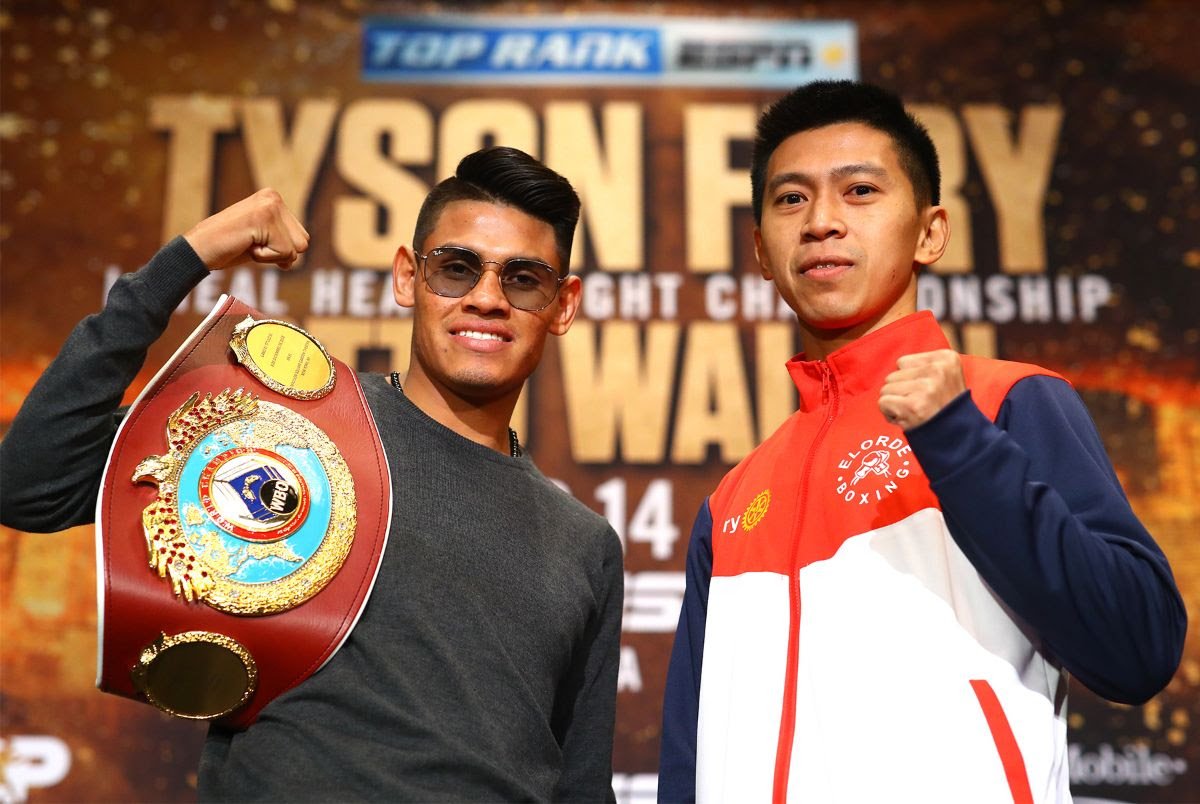 This is what the fighters had to say.

“If you’re a fighter, you want to fight as much as possible. This kid here, if he could, {if it wasn’t for} injuries and so forth, would fight eight times a year and be happy.”

“I was very surprised {to get the offer to fight on short notice}, but I knew it was a great opportunity so we took it. My mentality was I had to train harder and not take a long break because we knew the opportunity that was in front of us.”

“I want to thank Bob Arum. He gave me the opportunity to fight for the title against {Isaac} Dogboe, then the rematch, then De Vaca. Now I’m here, a big card. I just want to tell {Bob}, if he lets me, I want to fight in December, too. And, I will give it my all and show everyone I’m doing things the right way.”

“I want to do my best at 122 {pounds}, and the biggest thing in the division is to unify titles. If my body permits it, I’m going to stay here and unify titles. But if not, I am going to move up, and I have a great career in front of me.”

“It’s a big opportunity, a great experience for me. I’d like to thank everyone for giving me this chance.”

On taking the fight on short notice

“We’re ready because this is a once-in-a-lifetime opportunity. When they called, we accepted the challenge because every boxer wants to be a world champion.”

“This is my dream, to become a world champion. I think it’s coming to reality. Thank you, Mr. Bob Arum.”

“I moved up in weight because of the opportunities that are at 140 pounds. That’s why I moved up.”

“It would be great for me, great for Puerto Rico, and that’s one of my goals, to be a three-weight world champion.”

“We have to do one fight at a time. We are going up to a division with a lot of world-caliber fighters, but we have to get past Zepeda first to {earn} that world title opportunity.”

“It’s an honor to be fighting on Mexican Independence Day. I always see this date, big fighters, Mexican fighters fighting on this day. It’s my turn to rep, especially against {a Puerto Rican} fighter. I put all the work in the gym. We’re ready to give the fans a good fight, hopefully the best fight of the night.”

“He’s a smart fighter. He likes to box. He has some speed. We’ve been watching some fights of his, but I believe I have the same thing. I’m a smart fighter as well. Both of us will give it our all in the ring.”

“I am very happy to be on a big card in Vegas. I want to become a world champion again, and I have my medicine for Cardenas in my punches.”

“Cardenas is a great fighter, and a win against him will give me a title opportunity. I am coming here to get the win.”

“That was a great fight. I prepared myself very well, and we know big things are coming. We’re coming for that right now.”

“It will be a war. Every time two Mexicans are in the ring, a big show is promised. I am going to take this fight.”

“Each fight I keep improving. I always learn from my mistakes. After every fight, we don’t focus on what I did good. We focus on what I did bad, so we can make sure we fix it every time. Each time I step in the ring, I do better. And when the lights hit, I always react.”