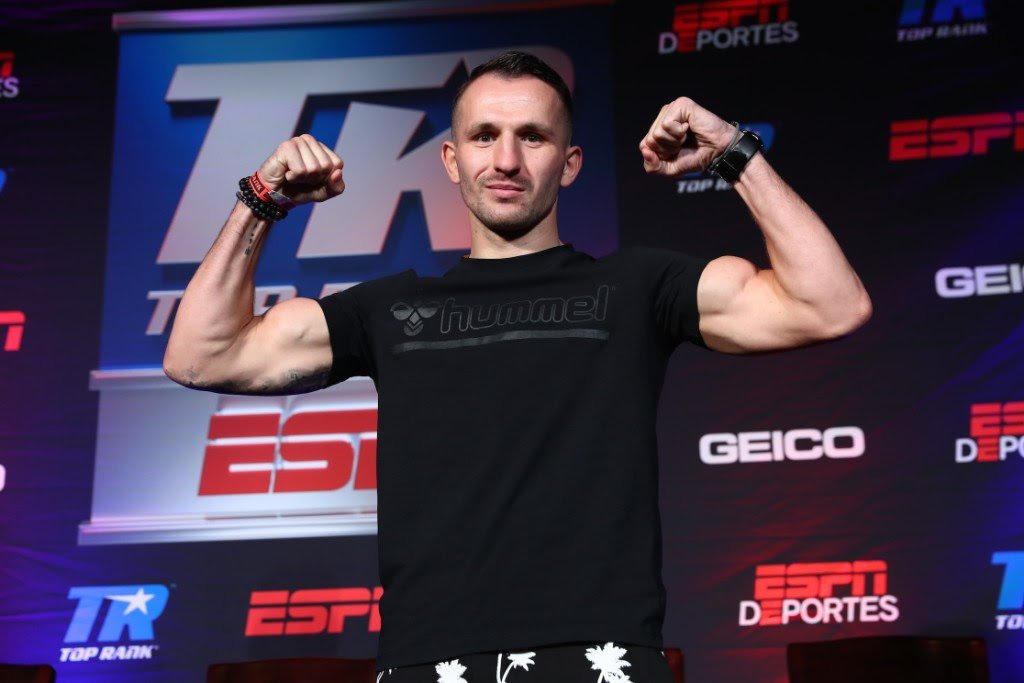 NABF welterweight champion Egidijus “The Mean Machine” Kavaliauskas is closing in on a world title opportunity. WBO Intercontinental champion Roberto Arriaza, a knockout artist from Nicaragua, is standing in his way. Kavaliauskas and Arriaza will square off on Friday, Nov. 16 at the Chesapeake Energy Arena in Oklahoma City as the co-feature to the previously announced Maurice Hooker-Alex Saucedo WBO junior welterweight title fight.

Hooker-Saucedo will be televised on ESPN at midnight ET, while Kavaliauskas-Arriaza and the rest of the undercard will stream live at 6:30 p.m. ET on ESPN+ — the new multi-sport, direct-to-consumer subscription streaming service from The Walt Disney Company’s Direct-to-Consumer & International segment in conjunction with ESPN.

“I am happy to be on this card and to move one step closer to my ultimate goal, which is a world title shot.” Kavaliauskas said. “Arriaza is a dangerous opponent, and I never overlook anyone. This is going to be an action-packed fight, and I am confident that I will be victorious.”

Kavaliauskas (20-0, 16 KOs) turned pro in 2013 following a decorated amateur career that included roughly 300 fights and Olympic berths in 2012 and 2008 for his native Lithuania. He turned heads early in his pro career, winning 11 of his first 12 fights by knockout. Kavaliauskas turned the corner to world title contention in September 2017 with a seventh-round TKO against Mahonri Montes to win the NABF welterweight title

He has defended the belt twice in 2018, knocking out former world champion David Avanesyan in the sixth round and grinding out a unanimous decision versus Juan Carlos Abreu on July 7 in Fresno, Calif.

Arriaza (17-0, 13 KOs), a 28-year-old native of Masaya, Nicaragua, is 2-0 in 2018, including a 20-second knockout against Sammy Valentin. The Valentin win earned Arriaza the WBO Intercontinental title, and an upset win over Kavaliauskas would put him in line for a world title opportunity.

The rest of the undercard is as followed:

Tyler Howard (15-0, 10 KOs), who is coming off a second-round TKO win on July 14 in New Orleans, will take on Isiah Seldon (12-1-1, 4 KOs) in an eight-round middleweight showdown. Seldon is the son of former heavyweight world champion Bruce Seldon.

Oklahoma-born heavyweight knockout artist Trey Lippe Morrison (15-0, 15 KOs) will fight an opponent to be determined in a six-rounder. Lippe Morrison last fought June 30 in Oklahoma City, knocking out Byron Polley in the third round of a crowd-pleasing bout.

Oklahoma City native and bantamweight prospect Aaron Morales (4-0, 3 KOs) will fight an opponent to be determined.

John Rincon, from Corpus, Christi, Texas, will make his pro debut in a four-rounder at lightweight.

Promoted by Top Rank, in association with Roc Nation Sports and Matchroom Boxing USA, tickets for this world championship event are on sale now. Priced at $250, $150, $75, $50, and $35, tickets may be purchased at the Chesapeake Energy Arena box office, online at Ticketmaster.com, all Ticketmaster outlets, or by phone at 1-800-745-3000.

Use the hashtag #HookerSaucedo to join the conversation on social media.