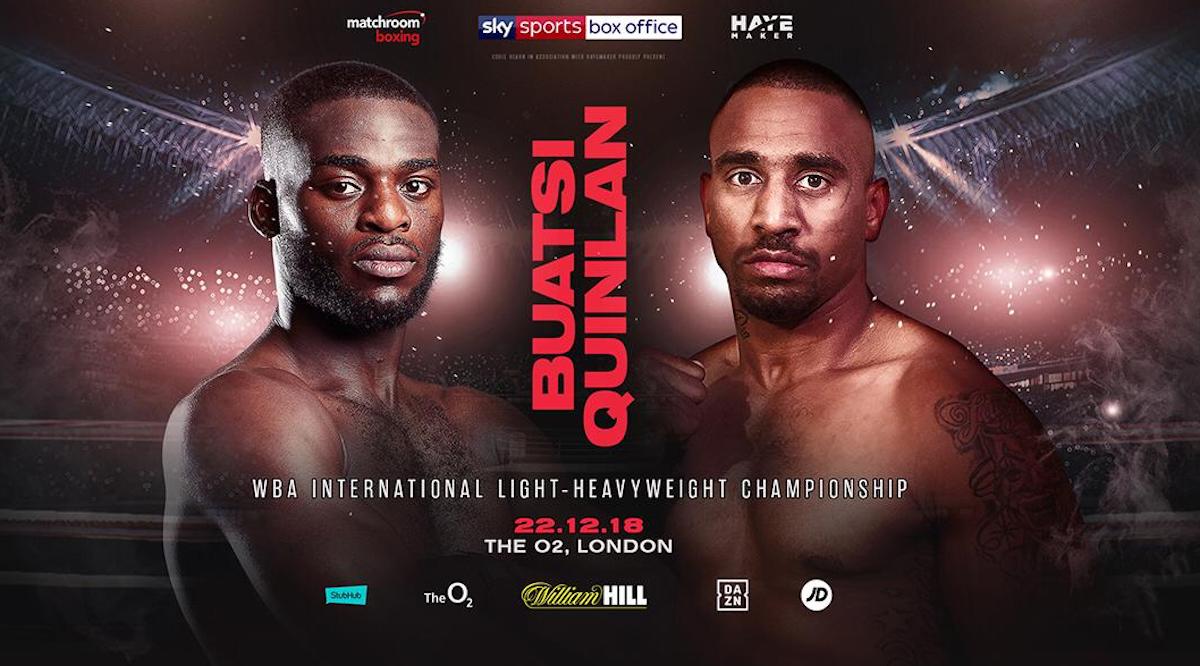 Joshua Buatsi will defend his WBA International Light-Heavyweight title against Australia’s Renold Quinlan at The O2 in London on December 22, live on Sky Sports Box Office in the UK.

Buatsi won the title in spectacular fashion when he destroyed Andrejs Pokumeiko inside one round at The O2 in July before blitzing Frenchman Tony Averlant in the opening round at the Metro Radio Arena in Newcastle in September.

The 25-year-old Croydon star is hoping that former IBO Super-Middleweight Champion Quinlan will take him rounds. December 22 will be Quinlan’s second fight in the UK, he took Chris Eubank Jr. ten rounds when they clashed at the Olympia last year.

“I’m hoping that he will give me the rounds that I need because my last two fights have gone early. He’s a very tough man and a proud Australian, he’ll be coming to fight. This isn’t about the title, it’s about getting the experience under my belt and pushing on.”

“He hasn’t fought anyone like me yet and I can’t wait to give him a great fight. I’m delighted to be returning to the UK on such a big card and I’ll be putting on a great performance for all my UK fans.”

Buatsi vs. Quinlan is part of a huge night of boxing in the capital. Main event sees fierce Heavyweight rivals Dillian Whyte and Derek Chisora rematch after their Fight of the Year contender in December 2016. Charlie Edwards gets a second shot at a World title when he challenges Cristofer Rosales for the WBC Flyweight World title, David Price and Tom Little meet in a must-win Heavyweight clash and British Featherweight Champion Ryan Walsh puts his Lonsdale belt on the line against Watford’s Reece Bellotti.

David Price and Tom Little meet on the undercard of the crunch Heavyweight rematch between Dillian Whyte and Derek Chisora at The O2 in London on December 22, live on Sky Sports Box Office.

Liverpool puncher Price has suffered back-to-back stoppage defeats, each time on Anthony Joshua’s undercards, and admits he will be fighting for his career when he meets Hatfield’s Little next month.

He was stopped by Alexander Povetkin after initially flooring the Russian last March. Then a fight against Sergey Kuzmin in September was cut short when Price suffered an injury.

The 35-year-old is determined to prove that he can still mix it with the top Heavyweights and is aiming to end 2018 on a high as he bids to return to title contention.

Little, 31, has previously shared the ring with Rio 2016 Olympic Bronze medallist Filip Hrgovic and fast-rising Heavyweight talent Daniel Dubois, who he took five rounds before being stopped in June.

“This is a real fight,” said Price. “He’s well schooled now and he’s also as tough and game as they come. I can’t go from fighting the likes of Alexander Povetkin and Sergiy Kuzmin to fighting knock-over jobs because I need the threat in front of me.

“I know Tom Little really well and he knows me. We’ve done lots of rounds of sparring and I’ve seen him improve a lot during that time. He’s certainly closed the gap that was between us when we first started sparring.

“With the Heavyweight division, there are big fights everywhere. There are so many big names around and they all need dance partners. There are massive opportunities for the winner of this fight on offer.

“What awaits the victor is part of what will make this a cracking fight. Tom has a couple of losses in his last couple of fights and so do I, so we’re both fighting for our careers in this one.”

“I’m delighted and privileged to be fighting on such a great card,” said Little. “This is a massive PPV show on a massive platform in Sky Sports. I’m fighting a huge name and it’s a dream come true to be honest.

“Not to discredit David but I think his last couple of losses have taken a lot out of him and that will be the difference on the night. I think I’m mentally stronger than David, he’s going to let his last couple of defeats get to him whereas I’m just eager to put them behind me and move on.

“I’m willing to go to them deep and dark places to get the win. I’m expecting a very rough fight, it’s going to steal the show. One way or the other, this fight won’t be going the distance.”

Price vs. Little is part of a huge night of boxing in the capital.

Charlie Edwards will challenge Cristofer Rosales for the WBC World Flyweight Championship on the undercard of Dillian Whyte vs. Derek Chisora 2 at The O2 in London on December 22, live on Sky Sports Box Office in the UK.

Edwards has already challenged for a World title when he met John Riel Casimero for the IBF Flyweight crown, gamely taking the talented Filipino ten rounds in London in September 2016. The 25-year-old has racked up five straight wins since his first professional defeat and is ready to seize his second shot at World title glory.

Powerful Nicaraguan Roasales stopped Daigo Higa to claim the vacant WBC World title in Japan before destroying hometown hero Paddy Barnes in four rounds at Windsor Park in August, and now the 24-year-old plans on silencing The O2 by delivering another devastating performance on December 22.

“I’m delighted to get a shot at the WBC World Flyweight title and I won’t be wasting this opportunity,” said Edwards. “I’ve come on a lot since the Casimero defeat and I’ll show that on December 22 by taking the WBC Flyweight World title home with me.

“I’ve mixed it with a two-weight, legit World champion and it’s done me the World of good. I’ve come on in leaps and bounds since then and I can’t wait to step up to that level again.

“Rosales is a tough man but he’s beatable and we’re already working on a game-plan. I’m heading into this fight with the experience of already challenging for a World title and that will benefit me greatly.

“My first shot at a World title was a huge gamble but this time I’m ready and I’ll be bringing that belt home with me. I’m in this sport to take on the best and December 22 will be my first World title win of many.”

“This is a great fight and huge opportunity for Charlie to win the WBC title,” said Eddie Hearn. “We saw Rosales’ devastating KO over Paddy Barnes this summer and he has become an impressive Champion. Charlie will have the London crowd behind him as he looks to make history on a huge night of boxing.”

General Sale tickets are available to purchase from StubHub, The O2 and Matchroom Boxing (matchroomboxing.com)