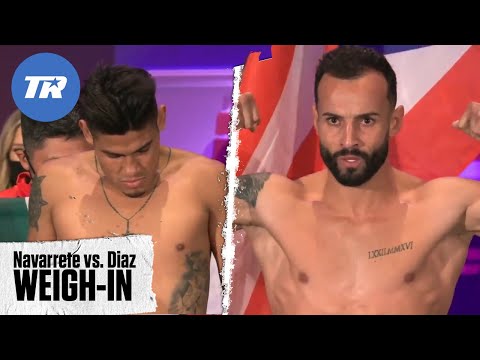 WBO featherweight champion Navarrete (32-1, 27 KOs) came in at 126 pounds and looked good, if not a little thin at the weight.

Challenger Diaz (26-2, 16 KOs), who Top Rank also promotes, weighed in at 125.8lbs. Diaz is a slugger from Puerto Rico who has come up short in losses to Masayuki Ito and Shakur Stevenson.

Diaz, 26, has good punching power and a lot of talent, but he struggles when fighting opposition with top-notch boxing skills, as we observed in his losses to Ito and Shakur.

On Saturday, it’ll be the first time that Diaz has been matched against a slugger like himself, and it should be interesting to see how well he does against Navarrete.

Navarrete, 26, will be fighting for the third time since moving up in weight from the 122 lb division in 2020. Boxing fans wanted to see Top Rank match Navarrete against Stevenson, but they chose not to.

It’s understandable why these opted not to make this fight because they would have been wrecking one of their revenue streams.

The arguably more interesting fight on this card on Saturday is unbeaten super middleweight contender Edgar Berlanga (16-0, 17 KOs), who will be looking to continue his string of first-round stoppages against the capable Demond Nicholson (23-3-1, 20 KOs) in an eight-round fight.

“I’ve played that fight [against Canelo Alvarez] over 100 times in my head, of me and him fighting together,” Berlanga said to Yahoo Sports. “Like I said, he has a big fan base and I’m building my fan base.

“My fan base is going to be just as big as him. It’s bound to happen. I don’t see anything past that.

“For that fight to happen, he’s at the top right now. If he remains at the top, which he will, and I continue to win and bust my butt and win in [an exciting] fashion, that fight is going to come.

For Berlanga to have the same size fan base as Canelo, it’s going to take a lot of doing, and it may take years upon years for that to happen. It’s safe to say that by the time Berlanga does have a massive fan base, Canelo will be long retired.

Canelo, 30, is likely to be done with boxing in the next four to five years, and it might be even sooner depending on whether he gets beaten soundly.

Berlanga needs to start facing live bodies if he wants to build his fan base enough to where Canelo will give him a fight.

It’s troubling that Berlanga is still being matched against Ulises Sierra, Lanell Bellows, and Eric Moon.

Even his opponent for this Saturday, Demond Nicholson, is someone he should have been fighting in the first year of his career rather than in his fifth.

Based on the glacial pace that Berlanga is being moved by Top Rank, you have to say that his chances of getting a fight against Canelo before the Mexican star retires are virtually zero.

Berlanga won’t become popular in time for Canelo to fight him, and he’s not going to throw a bone at him for altruistic reasons. That’s not Canelo.

While he seems like a nice guy, you don’t see Canelo looking to help out young, dangerous fighters who could beat him. Hence, he’s not fought, David Benavidez or Dimitry Bivol.