Eddie Hearn is looking to capitalize on his heavyweight Dillian Whyte’s recent success by matching him against UFC champion Francis Ngannou in a 2-fight series.

On Monday, Ngannou revealed that he’s interested in taking on WBC heavyweight champion Tyson Fury inside the boxing ring. Ngannou didn’t mention wanting to fight Anthony Joshua, though, which could be construed to mean that he viewed him below Fury in talent.

Hearn initially said to AK & Barak on their show on DAZN that he’d be receptive to letting Anthony Joshua take on Francis Ngannou but then said he would like Whyte to be the one that faces the UFC champion.

It’s very, very unlikely that Hearn would give Joshua (24-1, 22 KOs) permission to take on a big puncher like Ngannou in a crossover fight.

There would be too much for Hearn and Matchroom Boxing to lose if Ngannou landed one of his big right hands on the chin of Joshua.

It would be a much more devasting/humiliating defeat for Joshua than his seventh-round knockout loss to the heavyset Andy Ruiz Jr in June 2019.

It’s doubtful that Hearn would want to put Joshua in the position where he could get knocked out by the huge puncher Ngannou and wind up with a career that is potentially over. 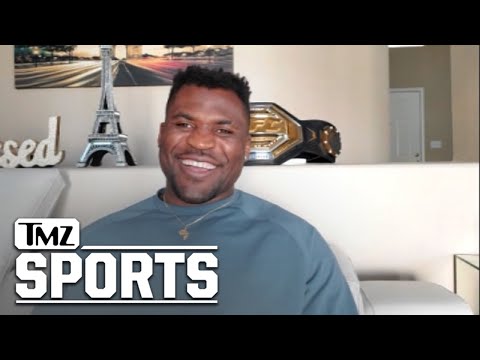 Hearn likes the idea of Whyte fighting the 34-year-old Ngannou twice, with one match inside a boxing ring and the other in the octagon.

It’s unclear if Hearn was clout-chasing to get Whyte some attention by talking about a fight between him and the highly popular Ngannou.

The Nigerian fighter Ngannou is coming off a devasting second-round knockout win over heavyweight champion Stipe Miocic on March 27th at UFC 260 in Las Vegas, Nevada.

Ngannou has received a TON of attention from that win, and it looks like Hearn is riding his coattails by talking about having his Matchroom heavyweights Joshua and Whyte potentially fight him.

What’s surprising is Hearn didn’t start throwing out some of his other names in his Matchroom stable to be potential opponents for Ngannou to fight inside the boxing ring.

Why stop at Whyte and Joshua when Hearn could have thrown out Filip Hrgovic, Joseph Parker, Oleksandr Usyk, and Dereck Chisora.

Whyte (28-2, 19 KOs) gained a lot of attention in avenging his recent fifth-round knockout loss to 41-year-old Alexander Povetkin by stopping him in the fourth round in their rematch on March 27th in Gibraltar.

The result was a depleted-looking Povetkin looked like a physical wreck and was blasted out easily by the 32-year-old Whyte.

After the fight, Dillian said he would give Povetkin a rematch if he wanted one, but Hearn has since vetoed that idea, saying that he wants the Russian fighter to retire. In other words, no rematch.