Hughes is a hard-working fighter with arguably better skills than Ryan but lacking the power & speed department. This could prove to be a more challenging fight for Ryan had last year when he beat Luke Campbell by a seventh-round knockout.

Ryan (22-0, 18 KOs) returned to the ring from a 15-month layoff last Saturday night, beating contender Emmanuel Tagoe by a 12 round unanimous decision at the Alamodome in San Antonio, Texas.

The performance Ryan put in against the 33-year-old Tagoe was not at the level that boxing fans thought it would be.

Indeed, he looked timid, unable to cut off the ring on Tagoe, and not displaying basic skills that you would see from even a fringe contender in the division.

With Ryan’s #1 ranking with the WBC, he should be a far better-skilled fighter than what he showed last Saturday.

“There’s a Cinderella story in the UK, a guy called Maxi Hughes, who’s on the most incredible run in the division,” Hearn said to DAZN Boxing Show.

Hughes (25-5-2, 5 KOs) is far removed from the big four lightweights that Ryan has his eyes on in the 135-lb division, but it could happen if Hearn can talk Golden Boy into it.

“There’s a lovely place called Doncaster in Yorkshire. We can get 20,000 there outdoors for Ryan Garcia’s first fight in the UK. We’ve got the bags ready and packed. We’re willing to travel. We hope that Maxi Hughes can get the call. He deserves the opportunity.”

If the idea is for Ryan to increase his popularity on the other side of the pond in England, it’s not a bad idea for him to fight over there against Huges.

“He’s a big star, Ryan Garcia,” Hearn continued. “He’s the A-side. I’m not even — even though Hughes is the champion, I’m not looking for ‘Hughes v Garcia,’ they can have all the sides they want,” Hearn said with a smile.

Ryan would be doing Hearn a massive favor if he agreed to fight Hughes because he’s not super popular, and his chances of fighting for one of the prestigious world titles at 135 are slim.

It might be a good choice for the 23-year-old Ryan to take the fight with the British fighter Hughes because he looks like he needs more work before he mixes it with Gervonta ‘Tank’ Davis.

“What a night 🌟🙏 Can’t wait to be back in the ring ASAP 22-0 🔥🥊🥊 my first time going twelve rounds was a great experience, much respect to Tagoe who really took some good shots all love. Now let’s get two more fights in this year 😤😤 Comment who you would for me to fight next?” said Ryan Garcia on Instagram. 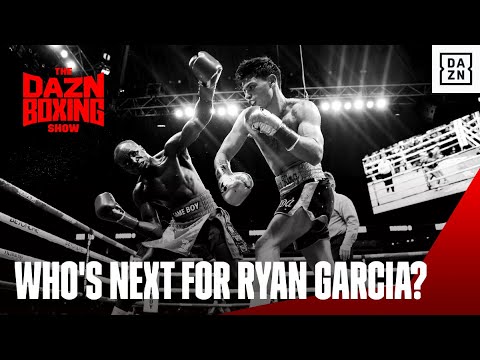