Promoter Eddie Hearn acknowledges that a step aside offer was made to Anthony Joshua as reported this week, but it’s not for the quoted price.

That report this week from Gareth Davies of the Telegraph is that Joshua (24-2, 22 KOs) was offered £15 million to step aside so that WBC heavyweight champion Tyson Fury could face IBF/WBA/WBO champion Oleksandr Usyk for the undisputed championship.

Hearn says that parts of the story were genuine, but other parts weren’t. Unfortunately, he’s not saying what is true and what is not.

Interestingly, Hearn acknowledges that sometimes it’s a good idea for fighters to think with their head when it comes to business decisions rather than their backsides.

Speaking hypothetically, Hearn said that if Joshua took the step aside, he could work with his new training team to get a tune-up fight under his belt before facing the winner of the Fury vs.  Usyk undisputed clash in a battle that would be much bigger.

Joshua fighting the winner of that match would be considerably bigger than if he plows ahead and takes the rematch with Usyk next.

No deal done yet for Step aside

“I think AJ, from his point of view, he’s always been the boss and been the one that made the decision, makes the calls,” said Eddie Hearn to the DAZN Boxing Show.

“There’s been a lot of speculation this week that a deal is done, and I think sometimes that gets his back up a little bit,” said Hearn about boxing fans and the media speculating about whether Joshua will agree to a step aside.

“Joshua was like, ‘When a deal is done, you’ll hear it from me.’ There’s definitely no deal done for him to step aside. There are conversations, and I  will have those conversations with him today.

“In his mind, I’ve always been quite transparent about this; he wants to rematch Oleksandr Usyk until the time comes where a long-form contract is presented to us that is solid and makes sense.

“You see,  this is much different than a step aside fee. Of course, the money is something you negotiate in that respect, but this is a plan. All he wants to do is win his heavyweight world title back.

“Right now, he has a cast-iron opportunity to do that in a rematch with Oleksandr Usyk. So any step aside, any other plan has to be solid. It’s not, ‘hopefully,  you guys get the winner, and Fury fights Usyk, and then Fury decides to be inactive for two years,'” said Hearn.

There’s not much time for Joshua and Hearn to negotiate a step aside if the backup plan is to face Usyk in April. Joshua better be in training just in case his step aside deal falls through.

Joshua isn’t looking for a step aside

“He will, as always, be the one that calls the shots. He’s made it quite clear at the moment what that shot looks like.

“I think people have conversations of ‘he said, she said,'”  said Hearn when asked how the talk of Johsua agreeing to a 15 million pound step aside deal originated.

It doesn’t matter if Joshua is looking for a step aside or not. The fact is, some wealthy people want to give him the money to help set up a bigger fight involving him against the Fury vs. Usyk winner.

It’s up to Joshua to decide if he wants to entertain the offers or ignore them and gamble on the rematch with Usyk.

Step aside offer made to AJ

“I’m not saying there’s no truth in some of the article in terms of the process, what happens and step aside and stuff like that. The fee is wrong, and lots of other stuff is wrong as well.

“Sometimes these journalists, and like Gareth [Davies], but sometimes you have to take a punt with a journalist. You heard the news. It’s either true or not. Unfortunately, some of it was true, and some of it wasn’t.

“But there’s no contract signed [for a step aside], and there’s a long way to go in terms of crossing off the T’s and dotting the I’s in terms of the detail.

“There has been an offer,” said Hearn about Joshua being given a step aside offer. “There’s been several discussions among by self. I don’t rule it out. I can’t rule it out. It’s not my job.

“AJ is the boss. He will rule it out or not rule it out. He’ll have an intelligent conversation. He’s very smart about the plan.

“He won’t want to do it because a lot of people that know boxing know that he’s going to a new trainer. He’s doing this. It’s a very smart move. And then, on the other hand,  ‘Oh, you’re ducking him [Usyk].’ You can’t win.

“Anthony has never ducked anyone, so he won’t want to even have one person think that he’s ducking that challenge because that’s not what he’s about.

“But sometimes you have to think with your head rather than with your a**. And for a lot more money than he was going to get in the first place,” Hearn said.

It’s got to be frustrating for Hearn to find out that there’s a mole somewhere that reveals the step aside negotiations to the media.

Even if the offer was a lot smaller than the $20 million reported, the critical thing is that Joshua really needs to step aside.

Not only would it allow him time to work with his new team and get a tune-up fight in, but let boxing fans see the undisputed fight next between Fury and Usyk rather than having to wait until later in the year.

The most important thing for Joshua is that by taking a step aside, he can save his career potentially because he doesn’t match up well with Usyk.

If AJ gets a new trainer, it will take a while for him to learn the new things they’re teaching him. He would be better off not having to cram the learning in a short period. That’s why taking a step aside makes sense.

AJ is only thinking about beating Usyk

“Look, there’s a smart play here somewhere, but Anthony is not about the money. If the plan makes sense from the development point of view, working with a new trainer, having another fight first, going into a much bigger fight, yeah, I can see the sense in it.

“But it’s not with Anthony. It’s never been the case, ‘Here’s some money. Does it tempt you?’ Because he’s not about that.  He’s a throwback fighter. He’s about legacy.

“All he’s thinking about at the moment is beating Oleksandr Usyk,” said Hearn about Joshua.

The way Hearn is talking, Joshua will choose to risk all and take the immediate rematch with Usyk. Hopefully, Joshua knows what he’s getting himself into if he decides to take the fight.

As Usyk’s promoter Alex Krassyuk said this week, a second loss for Joshua will create a lot of question marks about the viability of his career.

When an elite fighter starts losing more than they’re winning, it’s time to call it a day unless they’re only fighting for money. 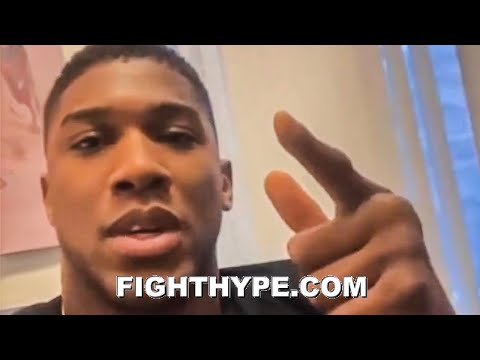