“Yeah, if Floyd moves up to ’54, I’d fight him. I’d take on anybody. I’m a fighter who never ducked anybody. If everything is right, you know, I’ll fight my mother,” Vernon Forrest speaking to this writer in Las Vegas in November of 2006.

As fans know, Vernon Forrest, AKA “The Viper,” never got a shot at Mayweather; and with it a shot at immortality. For there are plenty of us who feel the tall, long-limbed Forrest was all wrong for not only Mayweather, but for a number of other more celebrated fighters. We never got to see how truly great Forrest might have been; the massive fights eluding him, some poor match-making choices working against Forrest. At his best, in as much as in the best we got to see of Forrest, he twice hammered the Sugar out of Shane Mosley, and he also defeated good fighters in Vince Phillips, Raul Frank, Ike Quartey, and Carlos Baldomir.

This was, however, not enough – for either Forrest himself, or for the boxing historians. Forrest was good, but not great. Then, in a cruel act of fate, Vernon was shot and killed in 2009; this when his career was still very much alive. Today marks the 20th anniversary of Forrest’s finest win – this being the utter shellacking he gave Mosley in taking away Shane’s unbeaten record and his world welterweight title.

The Forrest of January 26, 2002 was a special fighter indeed. Fast, powerful, hungry, disciplined, and immensely skilled, Forrest was a joy to watch. Holding his hands the way the incomparable Sugar Ray Robinson held his, Forrest looked like a throwback to the glory days of the 1950s. Mosley, as special as he was, was beaten up, he was punished, he was totally beaten. It was a testament to Mosley’s inner strength that he was not knocked out or stopped. And Forrest proved it was no fluke by beating Mosley again, by wide decision in the rematch (Vernon having also bested Shane at amateur level).

Then Forrest ran into the unorthodox fists of Ricardo Mayorga, and his chance at greatness disappeared with the upset stoppage loss. Forrest lost a close decision in the return with the wild man from Nicaragua, and he then won a belt at 154 pounds. But Forrest is very much a fighter who, when we hear his name today, he makes us think, ‘what if?’

Sleek, savage, deadly, determined and skilful; Vernon Forrest at his best seemed to have it all. Only we perhaps never got to see Forrest at his very best. And this is nothing but a shame. But we fans remember Vernon and all that he did manage to accomplish during his short life.

Let’s go and say it: Vernon Forrest was a great fighter. 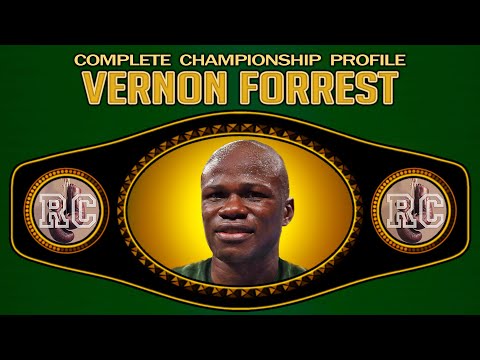