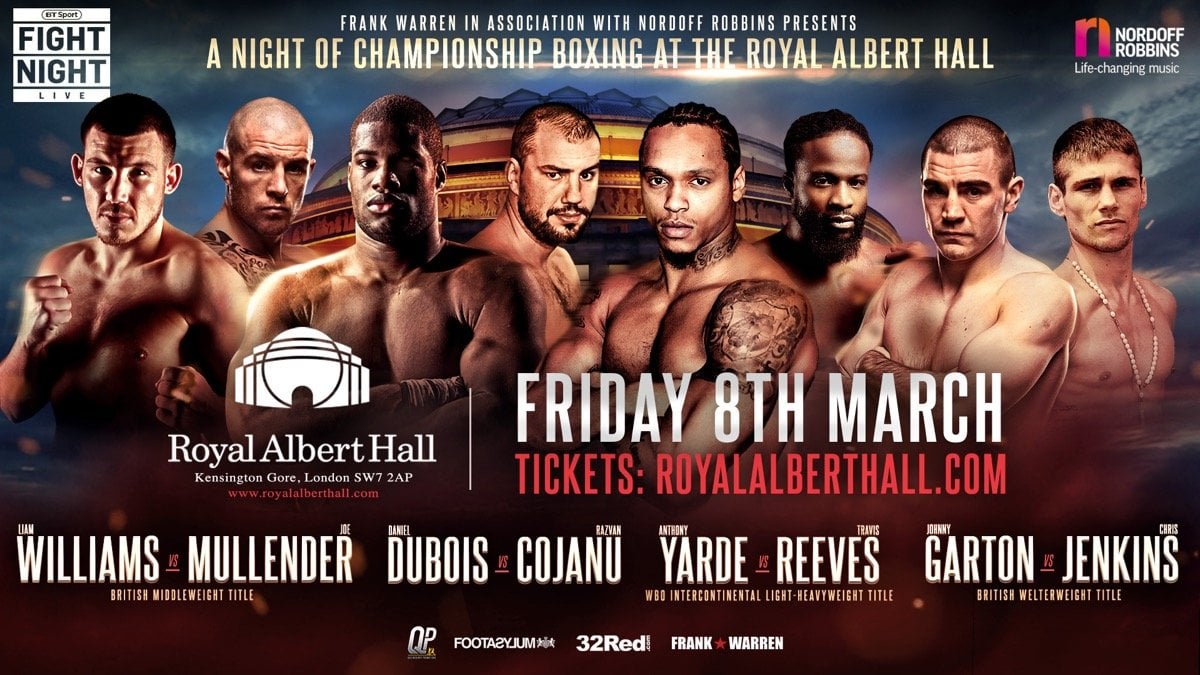 Frank Warren – I believe the Royal Albert Hall is the oldest active boxing venue in the UK, so it is a historical place as far as this sport is concerned.

I was told just now that nearly a hundred years ago the first welterweight championship fight took place, so it is fitting that we have a British welterweight title fight on the show.

I am looking forward to it, it is a fantastic venue as we all know and there isn’t a bad seat in the house. We’ve only got about 300 tickets left so we should have a really good atmosphere for the top fights we’ve got on the card.

Travis Reeves, I know, doesn’t come to make up the numbers and is well respected as a tough opponent – Anthony’s toughest yet. I’ve got faith in Anthony, I think he is the real deal and he needs to look good in this fight and make a statement. I was talking to Tunde Ajayi – his manager and trainer – before and we both feel that after this he is ready to go. He’s got to get through it though, it will be no walk in the park and I think Travis will get the best out of him.

To be honest, I don’t know what I’ve said to do his head in because I haven’t really said anything. I have only spoken when I’ve been interviewed and I don’t even really want to do that.

He is the champion and on paper I don’t stand a chance. I do my best and I know I am in for a tough night in the early rounds because if he is a world class fighter he gets me out.

I’m not a world class fighter on paper and I’ve only fought at English level. He is a very good fighter and I’ve got to try and live with him. My best is all I can do.

I’m not going to outbox him, am I? That’s not happening so I’ve got to stand there and fight with him and take the punishment. That’s it, I can’t really do anything else. He is better than me in most departments and there is only one department I can have a go at, which I am going to do. If I can go through it, I will stand and have a fight with the man for 12 rounds.

You sound like you’ve lost already, Joe, to be totally honest with you. I honestly believe he is not in my class and he’not, but what he is is very tough, game and he’s got bags full or a**h**e, simple as that. I know he will come to fight and we will.

I haven’t got much bad to say about him, but I don’t like him saying stuff like ‘it is just another gaff’ because this is his biggest opportunity and he keeps trying to downplay it and make out like he doesn’t care.

I should be on his mind 24-7 but he is playing it down and that is what does my head in. Joe Mullender is getting mullered. I expect to stop him 100 per cent and he is gonna get hurt.

This fight came from nowhere really. If you look at my defeats they were only that because I got split and against Tyrone Nurse I thought I won one and the other was very close. Really I haven’t taken them as losses or considered walking away from the sport.

I might be a bit of joker but I take the sport seriously and think I am British level. We have done a few rounds of sparring together two years ago and he is a good fighter. I watched his last fight against Corcoran and he looked good there as well. We will see what happens on the night, we have got a game plan, but he needs to have a shave tomorrow.

I remember the spar, it was a tough one and I really think this is a 50-50 fight. I also think it will be fight of the night, but I leave it all in the ring and I think I will come through this. In any fight you need to get it to be your type of fight and I am sure I will. I still don’t think being British champion has sunk in properly. A

few months ago nobody knew who I was or paid any attention, now I’ve got press conferences and people wanting to interview me, so it has totally changed. I am lapping it up, enjoying it and hopefully I will get a few more paydays.

You ask me to make a comparison between Nathan Gorman and Daniel Dubois, but they are two different fighters and it has nothing to do with this fight.

For me, Nathan Gorman is the best, but now I am in shape for this fight, unlike last time. We’ve watched Daniel and he is a great fighter and excellent prospect. He is a young guy, undefeated, and I have the pleasure and excitement to be in the ring with him.

I am in as good a shape as I have been in my whole professional career and I am planning to put on a show on Friday night.

I have done all the hard work and now I just have to get in there and perform. I only watched some of the highlights of his last fight and it was what it was, but I am going to go in and perform at my absolute best and show what I have got. I don’t think I am far away from the top, but I want to let my performances speak for themselves.

Getting to the top keeps me motivated and in the gym. That is the goal.

I am excited for this fight and I am all over it. It is a fight we thought we were going to have a few years back, so I am looking forward to beating Anthony and moving on to the next level and fighting for a world title.

I am the best in the States and, after I beat Anthony Yarde, I will be the best fighter in Europe. I have fought my way to the top and this fight will take me to a world title, which is what I have come here for.

I am not one to look to much at my opponent and, the same as everyone else, I am learning about him from listening to him now. I am learning on the job as well.

This year will most definitely be a big year for me and I said that last year that 2019 would be my year if I keep putting on big performances. You haven’t heard me mention Sergey Kovalev because I focus on one thing at time and he has not been put in front of me yet. Travis Reeves is the name my focus is on. I am going to go in there and take care of business. Turn up, show up, blow up.

Remaining tickets from £40 and are available to buy via www.RoyalAlbertHall.com