At the time of the stoppage, two judges had Yarde winning with scores of 68-65 and 67-66, while one judge had it 67-66 for Beterbiev. However, the king of the 175-pound division has never gone the distance, and tonight was no exception. 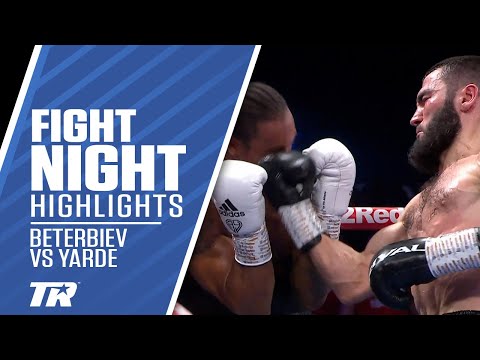 The fight began as expected, with Yarde boxing from the outside and using a jittery left jab to keep Beterbiev occupied. The Montreal-based champion moved forward with impunity as he began to figure out his challenger.

By the fourth round, Beterbiev had found his rhythm and distance, and he immediately began to push Yarde against the ropes. Beterbiev landed several thudding shots, but Yarde landed some of his own. During the following rounds, both men had their moments and sustained cuts. Yarde had one below his right eye, and Beterbiev had one above his left eye.

Beterbiev’s power again proved to be the difference, as he landed a right hand that sent Yarde to the canvas in the eighth round. Yarde struggled to get to his feet, and as Beterbiev moved forward to finish the fight, Yarde’s corner stopped the assault at 2:01 of the round.

Beterbiev said, “Every fight is different. It’s a different preparation. And the fighter is different, too. I can’t say I did a very bad fight. But if I could do it again, I’d do it better. But I feel good. To be honest, I prepared for the all the punches he did. That’s why I could come back. It’s because we expected those punches.

“Everyone can punch hard at this level. And Anthony did, too. But he’s young. I turned into a professional when I was 28. He has time. I hope he does well in the future. I want [Dmitry] Bivol. Right now, it’s everything. In that fight, we’ll have four belts. It’s really good fight, I think.”