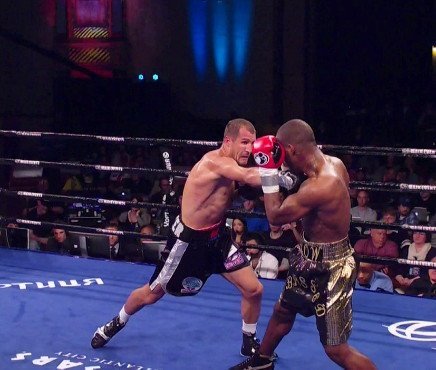 Recently, ESPN named Terence Crawford as their Fighter of the Year for 2014 due to his wins over Raymundo Beltran, Yuriorkis Gamboa and Ricky Burns. However, only the Gamboa fight was truly interesting to watch, and the Burns fight really proved nothing given how poor Burns has looked since then.

Gamboa is really a pumped up featherweight who had no business fighting in the lightweight division against a fighter the size of Crawford. The Crawford-Beltran fight was not an interesting fight to watch due to Crawford’s constantly clinching each time Beltran would get in position to throw a punch. It was not great television, believe me.

The fighter that probably deserves the 2014 Fighter of the Year is IBF/WBA/WBO light heavyweight champion Sergey Kovalev (26-0-1, 23 KOs) for his huge win over Bernard Hopkins last November. Kovalev not only beat Hopkins, but he totally dominated him. That fight was such a huge victory that it easily overshadows the wins that Crawford picked up.

In Kovalev’s other two wins in 2014, he defeated Blake Caparello and Cedric Agnew by knockouts. Those obviously weren’t huge names, but the way that Kovalev dispatched them was far more interesting than the way Crawford fought against Burns and Beltran. There’s something that can be said about being exciting, and that to me makes up for Kovalev not facing high quality opposition in his fights against Agnew and Caparello.

The criteria for Fighter of the Year should be involve a fighter being exciting in the majority of the fights he takes part in for the year. I believe that Kovalev showed in each of his three fights that he’s one of the most exciting fighters in the light heavyweight division. Yeah, he didn’t get a knockout win over Hopkins, but that was largely due to Hopkins playing it safe and fighting to survive rather than win.