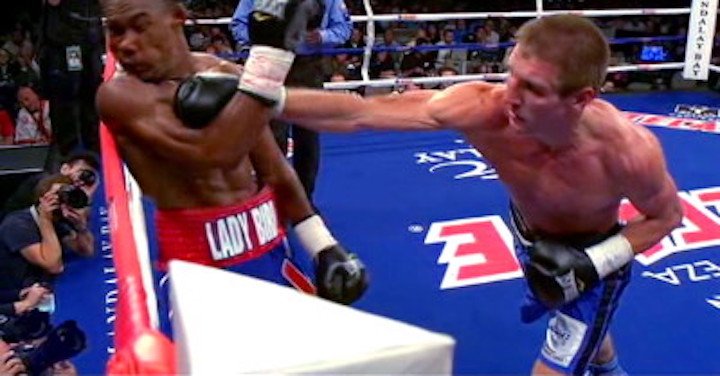 This month marks the 15th anniversary of Dmitry Pirog’s pro debut, while this July also marks the 10th anniversary of Pirog’s biggest, most high-profile win. It was on July 29th in 2005 when a 25-year-old Pirog had his pro debut, stopping a guy named Sasun Oganyan in six rounds. While on July 31st in 2010, Pirog won the fight that could be referred to as his coming-out party, as he KO’d Danny Jacobs in the fifth round (to this day no-one else has been able to stop Jacobs).

Pirog, who the rumor-mill had it was avoided by the likes of Sergio Martinez and other middleweight top names, looked set for stardom, maybe for greatness. Instead, suffering from a chronic back injury that never went away, Pirog’s hugely promising career came to an end after just 20 fights, all wins. And with his forced retirement from the ring came the loss of a fight that may well have proven to be epic, a fight that might even have marked the start of a savage rivalry that would perhaps have comprised of three or more fights.

It was during training for his Augst 2012 clash with an emerging Gennady Golovkin that Russia’s Pirog injured his back; Pirog rupturing a disc in his back during his intense training regime of hitting a truck tire with a sledgehammer. In the long list of the sport’s ‘what if’ mysteries, the outcome of this fight ranks pretty high. Would GGG have won, and then gone on to become the star he is today? Or would Pirog, a clever, gifted, and seriously tough and hard-hitting fighter, have beaten GGG, thus taking his place as a long-running, avoided yet celebrated world middleweight champion?

We will, of course, never know, and it’s a darn shame. But if we fans feel cheated, imagine how Pirog feels. Pirog, a fine amateur who had around 200 amateur bouts, ruled as WBO champ from July of 2010 (winning the strap in the Jacobs fight) to May of 2012 and his final fight before retiring; this a wide decision win over Nobuhiro Ishida. 20-0(15), at the time of his premature departure from the ring, Pirog went into politics. A couple of weeks ago, Pirog celebrated his 40th birthday. Who knows how much this fine fighter would have achieved and would have to look back on now had he not suffered from that stroke of painfully bad luck.

Maybe Pirog would still have been fighting today. But would anyone have ever beaten him? Pirog really did look like a fighter who could do it all, and he had precious few notable weaknesses if any at all. Oh, what a great fight it would have been between Pirog and Golovkin. This, a match that was forever lost, would likely have been brutal, mesmerizing, and crammed full of skill, class, and courage.