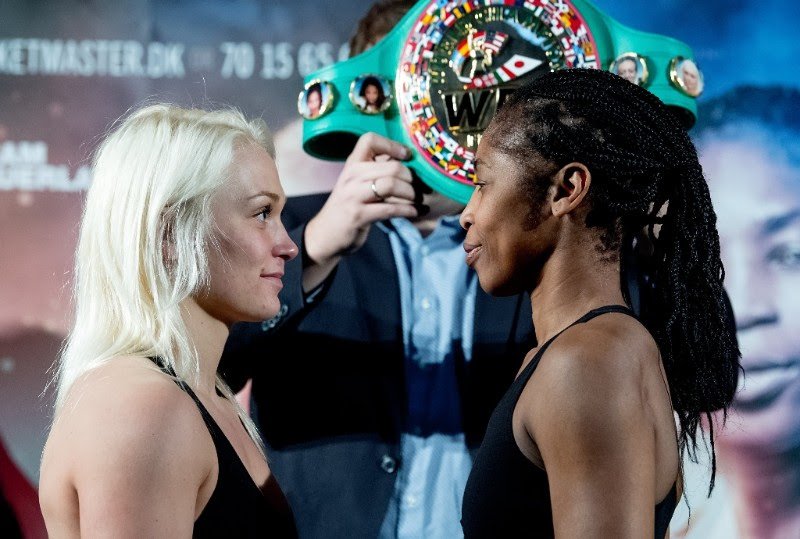 Dina Thorslund (10-0, 6 KOs) and her opponent Alicia Ashley (24-11-1, 4 KOs) both made weight today ahead of their WBC Female World Super Bantamweight Championship contest tomorrow night at the Struer Energi Park in Denmark.

Thorslund can become Denmark’s first World Champion since Mikkel Kessler and the country’s second ever female World Champion if she is able to overcome the experienced New York-based Jamaican in front of her home fans in Struer.

*Nikoloz Gvajava and Jemel Shalamberidze will be weighed in later.

Accompanied by legendary coach Hector Roca, the former two-time WBC World Champion touched down in Copenhagen earlier this week, and came face-to-face with Thorslund today at a press conference at the Crowne Plaza Copenhagen Towers hotel.

“I’m very happy to be here. I have fought all over the world and I’m looking forward to showcasing my skills for the Danish fans on Saturday,” said Ashley.

“I’m a boxer. I will use my movement and experience, but I can also stand and fight. I have a lot of weapons in my arsenal. Fighting away from home, I might be the underdog, but I have been in this situation many times before and have come out on top.”

Born in Jamaica, Ashley moved to America as a child and grew up in Brownsville, the tough Brooklyn neighbourhood, which among other notable fighters has produced former heavyweight champions Mike Tyson, Riddick Bowe and Shannon Briggs.

“I moved to America when I was 11 years old and grew up in Brownsville, Brooklyn. I was raised by a single mother with 2 older brothers, and we had a very competitive and highly disciplined upbringing,” she says.

Still based in New York, the fighter known as ‘Slick’ trains out of Brooklyn’s legendary Gleason’s Gym, and on Saturday, will rely on a wealth of experience with veteran coach Hector Roca and former pro-fighter Ada Velez comprising her corner team.

Roca has trained multiple World Champions including Boxing Hall Of Famer Arturo ‘Thunder’ Gatti, and was even tasked with training Oscar wining actress Hilary Swank for her role the Clint Eastwood’s Million Dollar Baby. While, Velez, a former World title-holder, returns to Denmark following a competitive 2004 fight with Anita Christensen in Aarhus.

Despite her opponent’s optimism, Thorslund insists she is ready to write her name in the history books as the first Danish World Champion since Mikkel Kessler defeated Brian Magee in 2012, and only the second female World Champion after Anita Christensen.

“I have a lot of respect for Alicia and what she has acheived in her career, but it’s my time now,” says Thorslund. “I have trained really hard, and on Saturday night, I look forward to winning my first World title in front of my home fans in Struer.”

The fight will be the first World Championship contest on Danish soil for over 5 years following Mikkel Kessler’s WBA World Super Middleweight title challenge versus Brian Magee on December 8, 2012 at the Jyske Bank Boxen in Herning,.

Thorslund will be hoping to become the first Danish World Champion since ‘The Viking Warrior’ won his fifth title with a third-round TKO victory over Magee, and join Anita Christensen as only the second ever female World title holder.

“I’m very excited for my first World title fight,” said the 24 year-old Thorslund. “My opponent Alicia Ashley is a very experienced boxer so I have a lot of respect for her and I’m expecting a really tough fight.

“I’m really happy this fight is happening in Struer. I want to give something back to the city that has supported me. I will train harder than ever to make sure I’m in the best possible shape. This is an important fight for me, and the first step on the way to collecting all the belts!”

Born in Jamaica but based in New York, Ashley is a former two-time WBC World Champion, who fights out of Brooklyn’s famous Gleason’s Gym. Nicknamed ‘Slick’, Ashley is a wily veteran who plans to use her experience to overcome Thorslund and reclaim the WBC’s coveted green and gold strap.

“I’m really excited to go to Denmark to fight for the title. I’ve fought on the road for most of my career and believe that I will have a fair decision,” said Ashley.

“I think that Dina will be formidable opponent. From the videos I’ve seen of her, it shows that she is a well-rounded fighter, and I believe that this will be an entertaining fight.

“I think the key to my victory is my experience and the fact that I’ve seen every style of fighting, and I can adjust to any and every situation. I’ve evolved as a fighter and have competed at the top level for a number of years and this fight will be no different.”

Said promoter Nisse Sauerland: “We’re delighted to be bringing this World title contest to Denmark. Dina will have home advantage and the chance to write her name in the record books by joining an elite group of Danish World Champions. She faces a tough, experienced opponent but with the support of her home crowd in Struer we believe she is ready to win her first World title.”

Tickets for the WBC Female World Super Bantamweight Championship contest between Dina Thorslund and Alicia Ashley will go on sale on Monday at 09.00 (CET) and will be available online via www.ticketmaster.dk.