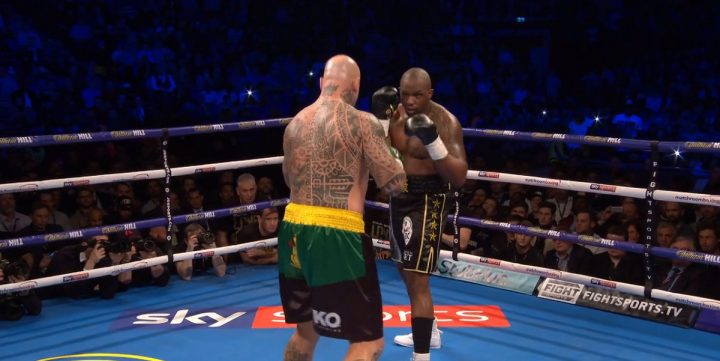 Dillian Whyte is very much a fighter who blows hot and cold. One day, he looks distinctively average in laboring to a decision win over Robert Helenius, the next, he goes to war in a thriller with Dereck Chisora. Well, last night in London we saw a hot fighter and a red-hot performance.

In blasting the usually durable Lucas Browne to sixth-round KO defeat, Whyte arguably put on THE performance of his career and scored the most electrifying KO of his pro career. Showing a wicked left hook – the weapon that so troubled Anthony Joshua in a British title fight back in 2015 – Whyte proved he has the raw power to hurt anyone; maybe the power to stop anyone.

The question is, what next – could it be a shot at Deontay Wilder’s WBC crown for “The Bodysnatcher?” This is what a victorious Whyte called for last night, yelling how he wants to challenge Wilder in June. If Wilder has no other fight set (the one he really wants, with AJ, looks as though it will have to wait) a rumble with Whyte seems to make sense. But will Wilder want it? Is this match-up a risky one, too dangerous, for “The Bronze Bomber?”

Eddie Hearn has reportedly offered Wilder big money (around $4 million) to get it on with Whyte in the past, yet the reigning and unbeaten WBC king declined, claiming a distinct lack of interest . But who else might Wilder fight next if it’s not Whyte? For as long as he’s out there and winning, Whyte isn’t going anywhere and he can be counted on to keep on calling Wilder out. Wilder will not want it said that he is avoiding Whyte, that’s for sure.

Unless either powerful and exciting heavyweight gets that monster fight with Joshua next (Whyte craving a second shot at AJ as much as he wants a go at Wilder) it makes all the sense in the world that they fight each other.

Wilder needs to keep busy and keep up the momentum and level of respect he earned from his big win over Luis Ortiz, while Whyte showed last night how he deserves a world title shot.

Wilder vs. Whyte in New York or London this summer? One thing is certain: this fight would have big fan appeal as fans everywhere know it would be violent, it would be a whole lot of fun – and it would absolutely end with a KO. Very possibly a quite brutal one.

You can ask the previously unbeaten Lucas Browne how hard “The Bodysnatcher” can punch; with that left hook especially.