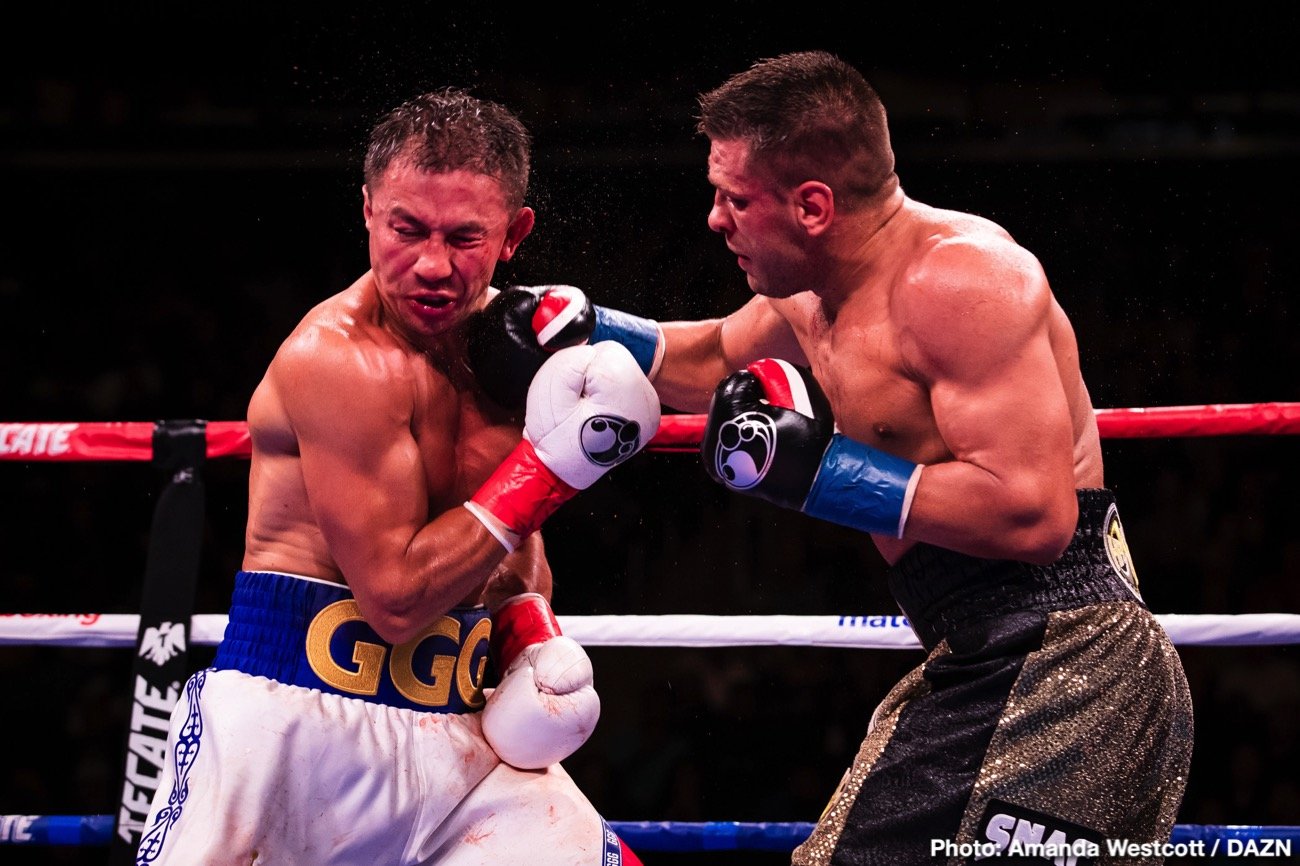 Sergiy Derevyanchenko’s promoter Lou DiBella and manager Keith Connolly believe that their fighter deserved the win against Gennady Golovkin last Saturday night, and they want a rematch. Connolly points out that the press row had Derevyanchenko (13-2, 10 KOs), and that he more than deserves a rematch.

Derevyanchenko made Golovkin (40-1-1, 35 KOs) look mortal last weekend in losing a 12 round unanimous decision at Madison Square Garden in New York. The fans at The Garden were highly upset when the judges’ scores were announced with Golovkin getting the ‘W’ in the fight instead of Derevyanchenko.

GGG started strong but then faded

“I think GGG is a great fighter, and he’s had all these moments in his life to cement his legacy,” said DiBella. “Tonight, Derevyanchenko cemented his legacy, and he was robbed of that moment, and it made me feel sick. That was like a Gatti-Ward fight that was fought at 10 skill levels above. But tonight it wasn’t GGG’s night, and I think he knew it. I love GGG, but he knows he didn’t win tonight,” said DiBella.

It wasn’t vintage Golovkin that we saw last Saturday. Golovkin was getting beaten to the punch, and outclassed by the more skillful Derevyanchenko.

Golovkin’s own trainer Johnathon Banks voiced his frustration about GGG’s performance in the fight. He said that Golovkin didn’t do the things that they had worked on during camp. Banks wanted Golovkin to throw more punches, move his head and defend better.

GGG needs to fight Derevyanchenko again if he was sick

“If he was legitimately sick tonight, then let’s do the rematch,” said Derevyanchenko’s manager Keith Connolly to IFL TV in response to Golovkin’s promoter Eddie Hearn saying Golovkin was sick. “Is there anyone in this room that doesn’t want to see a rematch? Raise your hand.

Hearn has been telling the media this weekend that Golovkin was sick for the entire week of the fight. A lot of boxing fans think Hearn is just trying to whitewash Golovkin’s poor performance by coming up with an excuse to explain it away. This is an old tactic that Hearn uses when one of his fighters fall apart. Hearn tends to come up with excuses instead of just giving credit to their opponents.

“There’s not a person here that doesn’t want to see a rematch,” said Connolly. “There’ a million great fights, and all these guys can fight each other. Andrade, Sergiy, GGG, Canelo, Danny Jacobs. Every single one of those fights is amazing, but Sergiy Derevyanchenko deserves a rematch or if he goes and fights Canelo next, because I’m sure Canelo wants to fight him now, we should get the winner of that fight,” said Connolly

First of all, it’s unlikely that Canelo is going to fight Golovkin in early 2020. If they do fight, it’s likely that they face each other in the second half of next year.

“GGG didn’t make anyone look good,” said DiBella. “GGG has never been hit with shots like that, including against Canelo. If he didn’t have the chin of God, he would have gotten knocked out tonight. He has the greatest chin in boxing. He took bombs tonight that were unbelievable.

The body shots thrown by Derevyanchenko are the punches that Golovkin showed a lot of heart in taking. He was getting hurt by those punches, but not going down. In the 5th, Golovkin would have likely gone down if the referee Harvey Dock hadn’t gotten in his way when he had GGG hurt.

“Keith is right. Some people had Derevyanchenko winning that. Gennady will know that, and maybe he wants to fight him again,” said Golovkin’s promoter Eddie Hearn. “We know what he wants. He wants the Canelo fight.”

“You have to remember that Gennady and Derevyanchenko have known each other and what they’re all about for years, and years and years,” said DiBella. “GGG took this fight because he’s a man’s man. He knew he was in for a war.

Golovkin won his second straight match since his loss to Canelo in 2018. GGG came back from that loss to defeat Steve Rolls last June. Golovkin was hit a lot by Rolls before Golovkin knocked him out in the 4th. A good amount of people on social media thought Golovkin lost the fight.  Derevyanchenko got back into the contest after round 2, and outfought GGG the rest of the way. Golovkin fought like he was ill, and he coughed and didn’t look like the fighter he used to be.

There needs to be a Golovkin-Derevyanchenko rematch says Connolly

‘If he fights Canelo next, obviously everyone wants to see that, because that makes sense. But if he doesn’t fight Canelo next, then he should be fighting Sergiy Derevyanchenko because Sergiy Derevyanchenko deserves it. Because I don’t want to sound like sour grapes,” said Connolly when asked why doesn’t he want to call it a robbery. “But Sergiy clearly won the fight.”

Deontay Wilder Posts Rare Twitter Message, But It's Nothing To Do With His Own Career
Follow @eastsideboxing