Derek Chisora is predicting a knockout victory over Kubrat Pulev this Saturday night in their rematch at the O2 Arena in London. The fight will be shown on DAZN, and it should be an interesting scrap between these two well-weathered old veterans for as long as it lasts. 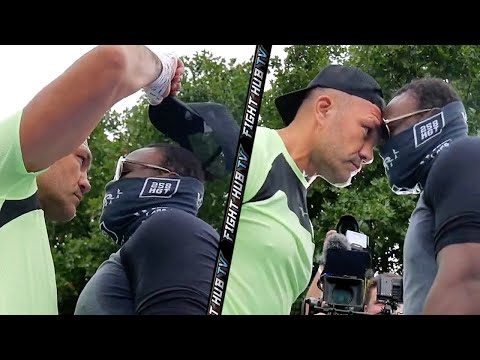 Chisora, 38, can still punch, but his cardio has been so terrible over the last few years that he can no longer win. In looking at Chisora’s recent workout, he appears to be doing very little to improve his stamina.

That’s not a good sign for him that he’s only working on his strength because he’s going to get outboxed on Saturday by the 6’4 1/2″ Pulev once he gasses after two or three rounds.

Listening to Chisora during his interviews, he sounds tired without even moving. It’s not a good sign going into his rematch with Pulev on Saturday.

Chisora already lost to Pulev in 2016 by a one-sided 12-round decision, and nothing suggests that the rematch will be any different.

“Listen, my supporters know what’s going to happen. They know I’m going to deliver, boy,” said Derek Chisora to Matchroom Boxing about his rematch with Kubrat Pulev on Saturday night.

“He come to the press conference with a little bit of arrogance to say [he’s guaranteeing a knockout]” said Pulev about Chisora. “That’s why I ask him, ‘How do you guarantee something?’

When they start singing that beautiful song ‘Oh Derek Chisora’ the game plan goes out the window. I will stop @KubratPulev at @TheO2 in front of my home fans. You’re going to love it 😉 #ChisoraPulev2 pic.twitter.com/CnHQOp0dnv

The 38-year-old Chisora should be giving Matchroom Boxing promoter Eddie Hearn a big thank you for setting up the rematch with Pulev because it might not sell tickets for the O2 or attract many new subscribers for DAZN.

Pulev’s career is pretty much over as well after his ninth-round knockout loss to former IBF/WBA/WBO heavyweight champion Anthony Joshua in December 2020.

The Bulgarian native has fought once since that loss, beating journeyman Jerry Forrest by a 10-round unanimous decision last May. Forrest, 34, is arguably a better fighter than Chisora at this stage in his career, and Pulev will likely have an easier time on Saturday night than he did with his last contest.

“I feel really good. I’m prepared for this. I think all the time how I must be better than before, better than yesterday. The better one is going to win. It’s nothing personal. In the first fight, he was so arrogant. After my win, he was different,” said Pulev.