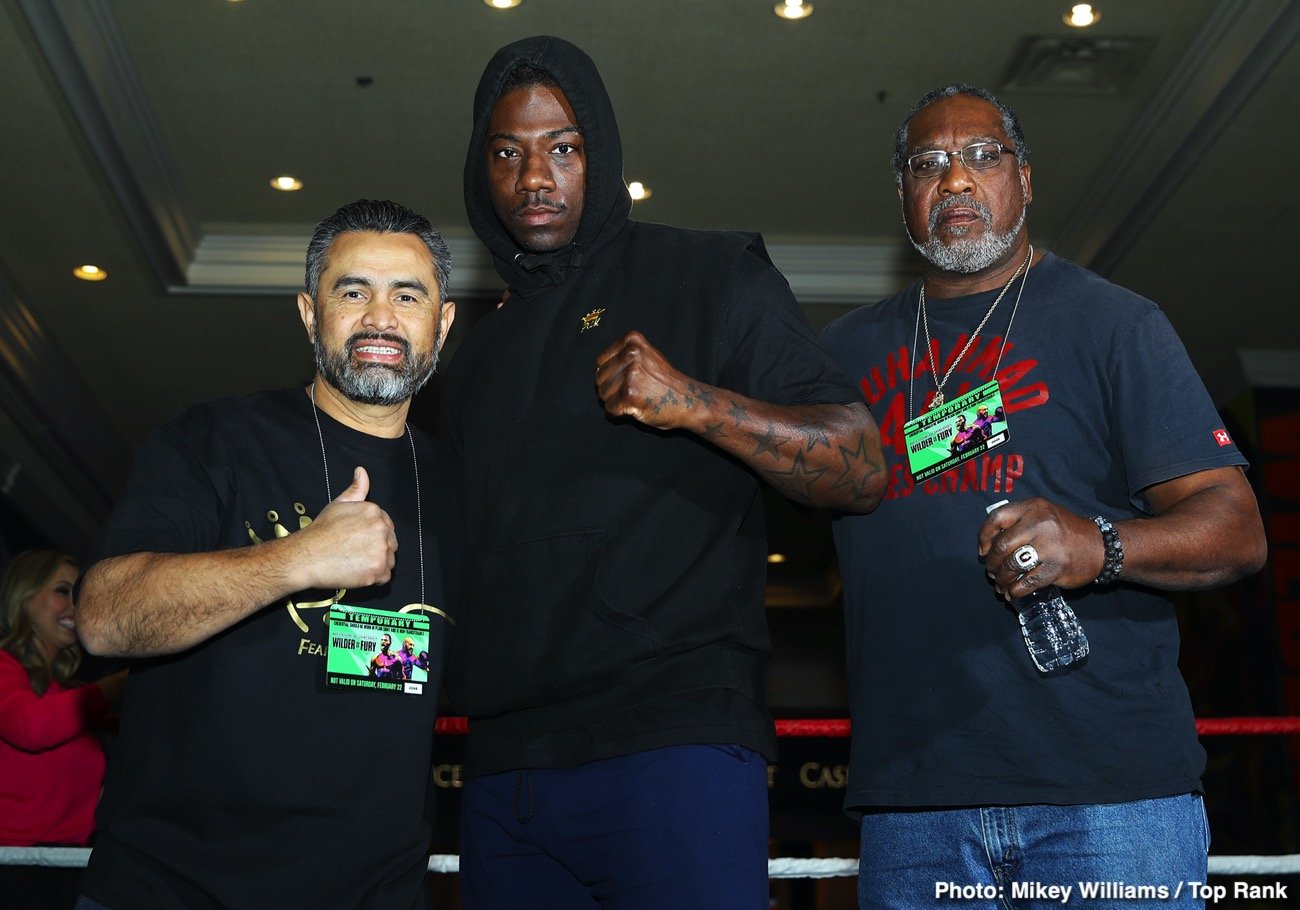 Fighters competing on the Deontay Wilder vs. Tyson Fury II undercard this Saturday, February 22 took part in a media workout Wednesday as they near their respective showdowns at the MGM Grand Garden Arena in Las Vegas.

Also showing off their skills Wednesday were fighters who enter the ring for Wilder vs. Fury II Prelims beginning at at 7:30 p.m. ET/4:30 p.m. PT, including hard-hitting unbeaten contender Subriel Matias, who battles Petros Ananyan in a super lightweight showdown, plus contenders Amir Imam and Javier Molina, who will fight in a super lightweight attraction.

A pro since 2015, Matias (15-0, 15 KOs) has stopped every opponent he’s faced in the professional ranks, including three more knockout victories in 2019. The 27-year-old will be fighting in the U.S for the third time on February 22, and the first time in Las Vegas, as he looks for a big 2020 debut.

The Fajardo, Puerto Rico native will take on the 31-year-old, Ananyan (14-2-2, 7 KOs), who made his U.S. debut in December 2019, losing a narrow majority decision against Kareem Martin after defeating Arkadi Harutyunyan in April 2019.

Born in Abovyan, Armenia and training in Houston, Texas, Ananyan was unbeaten in his first 15 fights after turning pro in 2015.

“I’m very excited for this fight and thankful to my team for giving me this great opportunity,” said Matias. “Just like all of my other fights, I’m going to train to my maximum level, because no matter who the opponent is, we’re all chasing the same dream.

“I want to thank him for taking this fight, but I won’t let him stand in my way. We’re going to give the fans great action and on February 22, we will know who is the most prepared to win.”

“This is a moment that every boxer dreams about and I can’t wait to demonstrate my skills on a big show,” said Ananyan. “I’m training hard, learning my opponent’s style, his weaknesses and putting together a strategy for fight night.

“This is a very important fight for me, because with a win I will be able to make my dreams come true. It’s been a long road to achieve my dreams and I’m ready to take another big step on February 22.”

The fighting pride of Albany, N.Y., Imam (22-2, 19 KOs) has resumed his quest for a super lightweight world title. After promotional issues kept him out of the ring for nearly two years following his competitive March 2018 decision loss to Jose Ramirez for the vacant WBC super lightweight title, Imam came back in grand style last November, knocking out Marcos Mojica in four rounds.

Imam with tough fight against Molina

The Mojica fight was his first under the Top Rank banner, and he’ll return against promotional stablemate Molina (21-2, 9 KOs), a 2008 U.S. Olympian. Molina went 3-0 in 2019, most recently knocking out Hiroki Okada at 1:05 of the opening round in their ESPN-televised showdown.

“I feel blessed to be fighting on the undercard of the biggest fight of the year,” said Imam. “I am prepared to shine and take full advantage of the opportunity and the exposure. I’ve had a great camp in preparation for this fight.

“I’m excited to get in the ring and I feel stronger and more prepared than ever. Defeating Javier Molina will put myself back in the conversation as one of the top super lightweights in the world.”

“I’m looking forward to fighting in an event as big as this one,” said Molina. “I know I’m facing a tough fighter in Amir Imam, but these are the type of fights that I need to earn a world title shot. I’m excited and ready to make a statement on February 22.”

Rounding out the card is sensational 17-year-old prospect Vito Mielnicki Jr. in a four-round welterweight attraction against Corey Champion, and unbeaten featherweight Isaac Lowe squaring off against Mexico’s Alberto Guevara.

Fighting out of Las Vegas, Nevada, Romero (10-0, 9 KOs) added three knockout victories to his tally in 2019, including a highlight-reel knockout win on FS1 in April when he stopped Andres Figueroa.

A fast-rising prospect in the Mayweather Promotions stable, the 24-year-old will look to extend his five-fight knockout streak on February 22. He will take on the 30-year-old Ahmetovs (5-0, 2 KOs), who turned pro in March 2019 and picked up five victories throughout the year. Ahmetovs was born in Riga, Latvia and fights out of Delray Beach, Florida.

The 19-year-old Flores (16-0, 6 KOs) is one of the sport’s rising stars, an amateur prodigy who signed with Top Rank at the age of 16. Already a proven ticket-seller in his hometown of Stockton, California, he will be making his fourth Las Vegas appearance.

Last September, he shut out Miguel Angel Aispuro over six rounds on the Fury vs. Otto Wallin undercard at T-Mobile Arena. Conway (17-1, 7 KOs) is a five-year pro whose only defeat came via split decision to Francisco Esparza last October.

Still a senior in high school, the 17-year-old Mielnicki (4-0, 3 KOs) fights out of his hometown of Roseland, New Jersey and turned pro in July 2019 after a stellar amateur career.

Mielnicki has shown his immense skill in back-to-back performances on FOX PBC Prelims, stopping Marklin Bailey on the Wilder vs. Ortiz II prelims show on FS2 in November, then defeating Preston Wilson in his 2020 debut in January on FS1. He will take on the 21-year-old Champion, who fights out of Charlottesville, Virginia and has fought three times since turning pro in July 2019.

Lowe (19-0-3, 6 KOs), Fury’s close friend and training partner, is a former Commonwealth featherweight champion who has won five in a row since a 2018 draw against Ryan Walsh for the British featherweight title. A fan-friendly pressure fighter, Lowe was victorious on the undercards of Fury’s last two bouts and hopes to move closer to a world title shot with another win.

Guevara (27-5, 12 KOs), a native of Mazatlán, Sinaloa, Mexico, is a two-time bantamweight world title challenger who pushed then-champion Leo Santa Cruz the distance in December 2012. He fought Shakur Stevenson last July on short notice and gave a valiant effort before being stopped in the third round.

Tickets for the event are on sale now and can be purchased at www.mgmgrand.com or www.axs.com. The event is promoted by BombZquad Promotions, TGB Promotions, Top Rank and Frank Warren’s Queensberry Promotions. A Premier Boxing Champions presentation.