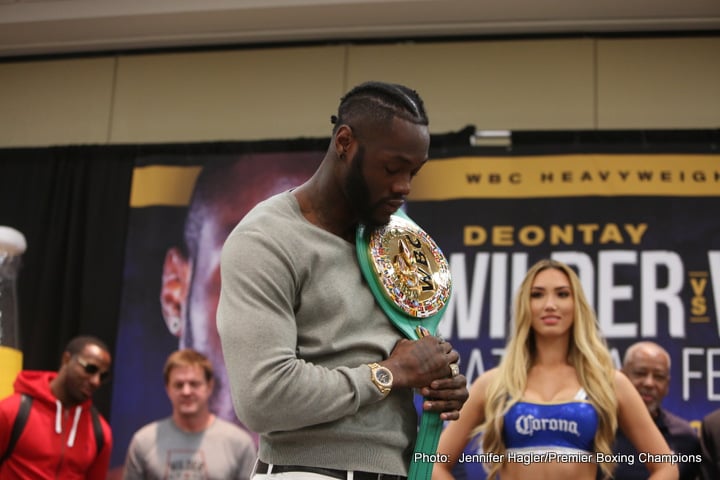 WBC heavyweight ruler Deontay Wilder, last seen halting a game Gerald Washington in February, is expected to return to the ring in September or October according to his promoter Lou DiBella, who spoke with Sky Sports.

British promoter Eddie Hearn has sent an offer for Wilder to defend his belt against former British champ and current top-10 contender Dillian Whyte, but it’s an understatement to say Wilder’s response to Hearn was extremely negative (to put it mildly – Wilder really laying into both Hearn and Whyte, with a number of offensive expletives; Wilder insulted at both the cash offer and the deal being on what the champ referred to as “your terms.”)

Hearn, in also speaking with Sky Sports, says he is doubtful Wilder will agree to defending against Whyte.

“I’ve made several offers to Al Haymon’s team and we are awaiting a final answer, but I think Deontay made things clear on his instagram,” Hearn said. “It’s a great offer and a great career move – a chance to earn plenty of money but also be involved in a real fight and ‘IF’ he is good enough to win then it sets up a massive fight between Anthony Joshua and Deontay Wilder. What I’m seeing from these camps is a reluctance to face Dillian. They know he can be a handful and it’s more than likely you are going to have to roll around at the press conference as well.”

Wilder is of course having nothing to do with the notion that he is reluctant to fight Whyte (beaten only by current WBA/IBF champ Joshua), insisting on his instagram response that he would get no credit for beating up Whyte (Wilder worded it far more colourfully!)

And DiBella says a mandatory against former champ Bimerne Stiverne is “a reality we have to deal with.”

“His immediate priority is to get the biggest fight he can get, but he (Stiverne) is still technically the WBC mandatory. At this point – this is June – probably September-October.”

Whoever he fights next, it will be good to see Wilder back in action. It would, though, be nice to see the KO artist fight more than just twice a year (maybe he will get a December fight in also?) As for who the more exciting, and deserving, next challenger would be out of Stiverne (old, incredibly inactive and already beaten by Wilder) and Whyte (young, hungry and unpredictable) – it seems as obvious choice.