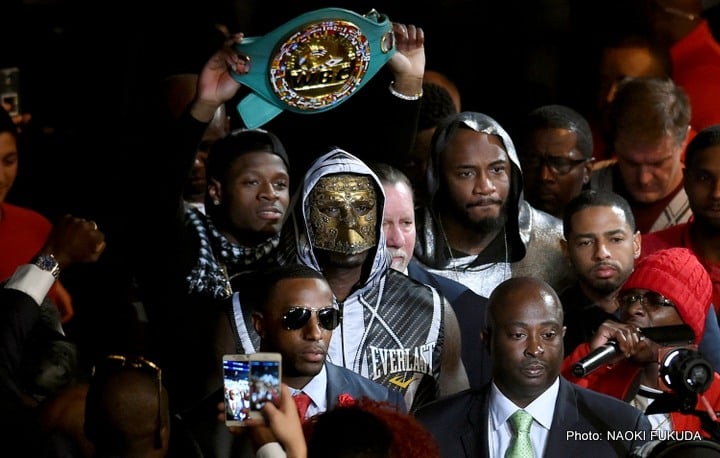 Earlier today in Miami, the respective sides of Deontay Wilder and Alexander Povetkin engaged in purse bids for the mandated WBC heavyweight title defence by Wilder. As reported by ESPN.com, Povetkin’s people won the bid with a big $7.15 million bid. Lou DiBella, representing Wilder, bid a little over $5 million and 100,000.

Fans are now wondering where the fight will take place, if at all? Will Wilder opt to vacate the WBC belt, perhaps to concentrate on trying to land a huge money fight with Tyson Fury should Fury repeat his win over Wladimir Klitschko? Wilder did recently say how he has no plans of giving up the green belt he won just over a year ago and has successfully defended three times. But will “The Bronze Bomber” travel over to Russia if Povetkin’s people decide to stage the fight there?

DiBella, as quoted by ESPN.com’s Dan Rafael, said he has no issue with having his fighter go to Russia to defend the title:

“If they put fight in Russia then I hope Mr. Putin can personally attend so he can watch Sasha get KO’d,” DiBella said.

If Wilder does take the fight, and if he can become the first man to knock out Povetkin (who has been beaten only by then-world champ Wladimir Klitschko) the KO artist will score the biggest and most impressive win of his pro career. However, there are plenty of fans out there who feel Povetkin will be the fighter scoring the KO if and when the two big men meet.

A great fight on paper, and arguably a 50-50 match-up, it is to be hopes Wilder Vs. Povetkin does indeed go ahead. In whichever country and venue the winners of today’s purse bid want it to happen.

It will look extremely bad if Wilder opts to dump the belt instead. Of course, the fight could still happen in the U.S, which would obviously appeal to Wilder a great deal. But if it is Russia, the world champion who recently gave an interview in which he said he wants to be a true world champion, in that he will go to the country of an opponent to fight, better get his passport out.

And if Wilder can score a KO over Povetkin, his star status and earning power can only rise.