In terms of who former two-time heavyweight champ Anthony Joshua may fight in his 2023 ring return, another name has surfaced. With an article on this web site reporting how Gerald Washington is in the frame for AJ’s return, The Mail is reporting how Australia’s Demsey McKean could be the guy. As per Adam Catterall, who was speaking about AJ on the podcast Fight Disciples, the 6’6” 32 year old from

Queensland, Australia could be the man in the opposite corner when Joshua launches his latest comeback. 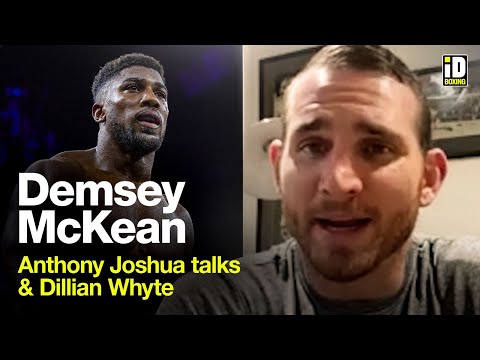 In the quite recent past, Eddie Hearn has mentioned McKean as a possible candidate for Joshua’s list of comeback opponents. Also, Gareth A. Davies, who is more often proven right than wrong as far as he and his sources are concerned when predicting a match-up that is in the offing, told Talk Sport that he too has heard it will be the unbeaten McKean next for Joshua.

“That will be a two or three round knockout win for Anthony Joshua, probably at The O2 Arena, you won’t be able to get a seat,” Davies said.

Let’s face it, it will be no shocker if Joshua, 24-3(22) is given a, shall we say, “safe” opponent in his latest comeback, this following those two humbling losses at the hands of Oleksandr Usyk. Hearns’ plan is for Joshua to box three times this year, so a nice easy one with which to get his confidence back makes all the sense in the world for Joshua. And as Davies said, his comeback will sell out, with AJ being such a huge star.

McKean, 22-0(14) has also fought some MMA bouts and he will be taking a massive step up in class if he does fight Joshua. McKean, a southpaw, is big and he can punch some, but he has never faced anyone of note and he has boxed outside of his homeland just twice; once in the US, once in the UK. Last seen stopping Patrick Korte in October in a fight that saw him pick up the vacant IBF Inter-Continental heavyweight strap, McKean’s best win is possibly his 2020 stoppage win over Jonathan Rice.

So, if it is McKean next for Joshua, how will the fans react? We know how the AJ fans will react, they will be fine with it and the fight will likely sell out. But harsher critics will certainly be less happy with McKean as Joshua’s choice of opponent.