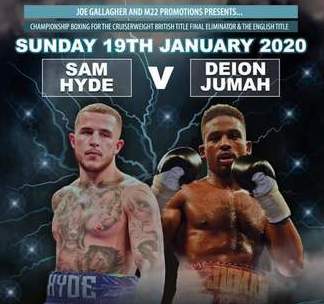 In the first significant fight to take place in Britain in this new year, cruiserweights Deion Jumah and Sam Hyde gave fans in attendance in Manchester an all-action fight that went the full 12 rounds – Defending his English title for the first time, 30 year old Jumah, who won the belt with an impressive KO win over Wadi Camacho in September of last year, was forced to dig deep and to take some shots from the determined Hyde.

After the 12 absorbing, at times quite punishing rounds were over, Londoner Jumah was given the nod via scores of 115-113 twice and 115-114. Jumah, who improved to 13-0(7) with the victory also earned himself a shot at the British cruiserweight title, currently the property of Richard Riakporhe. Hyde of Cheshire, who showed a whole lot in defeat, falls to 15-2-1(8) and he has been stopped just once – by Riakporhe.

After a steady opening session the action heated up and kept on heating up as both men became embroiled in a battle of stamina and courage. It was a thoroughly enjoyable fight, as all those in attendance will agree (and hopefully this fight will be available via YouTube soon), and it was yet another reminder of how two proud British warriors can put on a gutsy, admirable show like no other fighters can. Southpaw Jumah, a pro since 2013, is known as a slick operator, but yesterday, he had to show his raw fighting courage.

Hyde just kept coming and coming, rocking the defending champ on occasion, if not really hurting him or dazing him. Both men gave their all and were the rightful recipients of a standing ovation at the end of the war. A return between the two would be most welcome but Jumah wants that British title. The fight between he and Riakporhe, 11-0(8) should prove to be one well worth tuning in for; or for being there live and in person.

The first thriller to take place in a British ring in 2020 took place on a Sunday, traditionally a day of rest, but all those fans who made it out to watch the fight have zero regrets for having done so. Both fighters now need a good, well deserved rest.