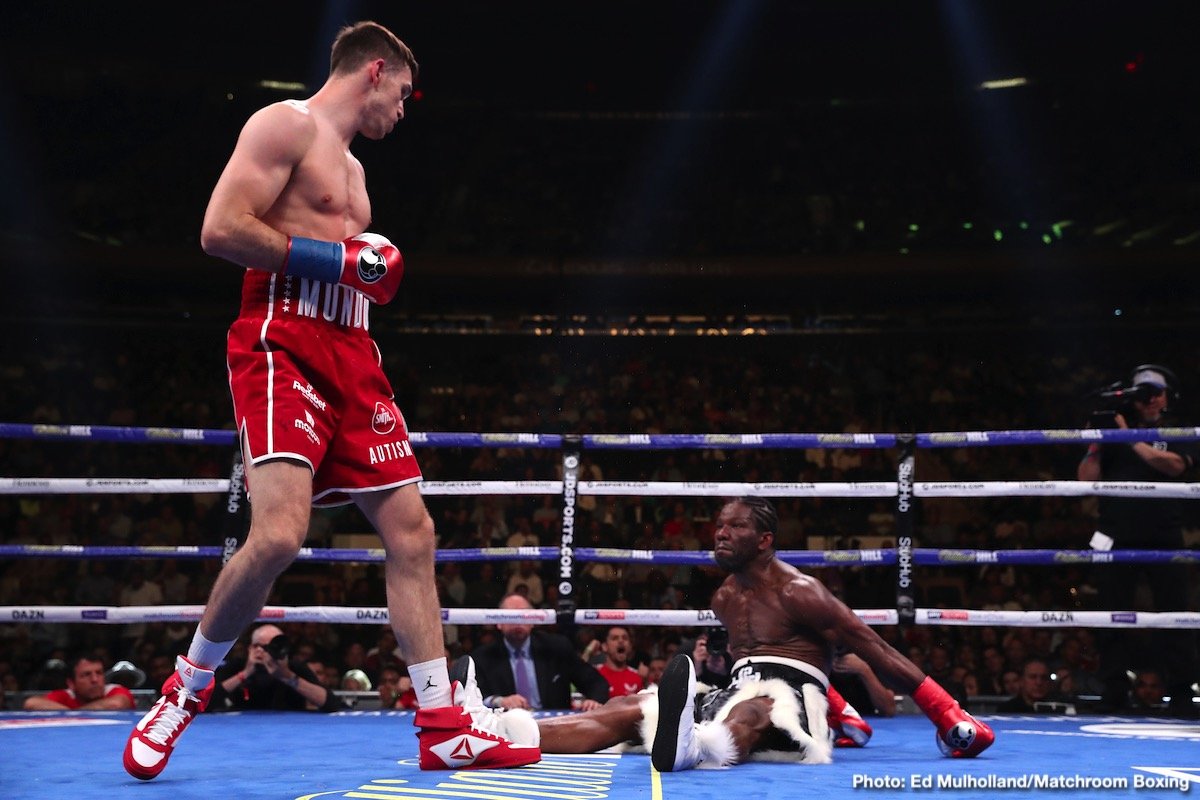 Oscar De La Hoya says Callum Smith turned down Golden Boy Promotions’ offer made to him to face Saul Canelo Alvarez on May 2 in his next fight on DAZN. De La Hoya says Smith (27-0, 19 KOs) would have made 3 to 4 times his highest career purse for the Canelo fight.

Oscar didn’t come right out and say it, but his comments give the impression that the Canelo train has left WBA Super World super middleweight champion Smith behind. De La Hoya says they have other options for Canelo, and whoever turns down their offer, they won’t get the fight.

The offer that Callum turned down wasn’t revealed. All we know is that it was turned down, and Callum’s promoter Eddie Hearn is calling it the “initial offer,” which suggests that he believes that Golden Boy will continue negotiating the Callum vs. Canelo fight.

“We have a few opponents that we’re looking at,” De La Hoya said to ESPN.com. “We’re going to go down the list. And whoever turns it down, on to the next one.

“I commend Billy Joe Saunders because he went on record saying he wants the fight and would fight Canelo for free, but there are several guys out there…We will just keep going down the list.”

It would be interesting to know who the “several guys” are that De La Hoya has in the running for Canelo’s next fight. It was believed that there were only three fighters – Saunders, Ryota Murata and Callum – that they were interested in. The negotiations with Murata evaporated quickly, and that fight has already been ruled out for May.

Saunders received an offer too for Canelo fight

There was reportedly an offer made to Billy Joe (29-0, 14 KOs) for the Canelo fight, which was rejected as well, according to Mike Coppinger. If Golden Boy is going to give up on negotiations with him too, then it’s anyone’s guess who they would be looking for as an opponent for Canelo.

These are the likely suspects that Golden Boy will look to negotiate with for Canelo:

We’re really reaching here with some of the names on that list, but you can bet that one of them will get selected for Canelo if Saunders or Callum fail to agree to the offers made to them by Golden Boy.

U.S boxing fans would likely much prefer to see Canelo fight Munguia or Jeison Rosario than seeing him fight Callum or Saunders. Even Derevyanchenko would be much preferable than seeing Canelo take on Saunders or Callum.

It’s not that those guys are bad fighters necessarily. It’s more of a case of them not being well known to the average American boxing fan, who doesn’t keep up with overseas boxing in Great Britain.