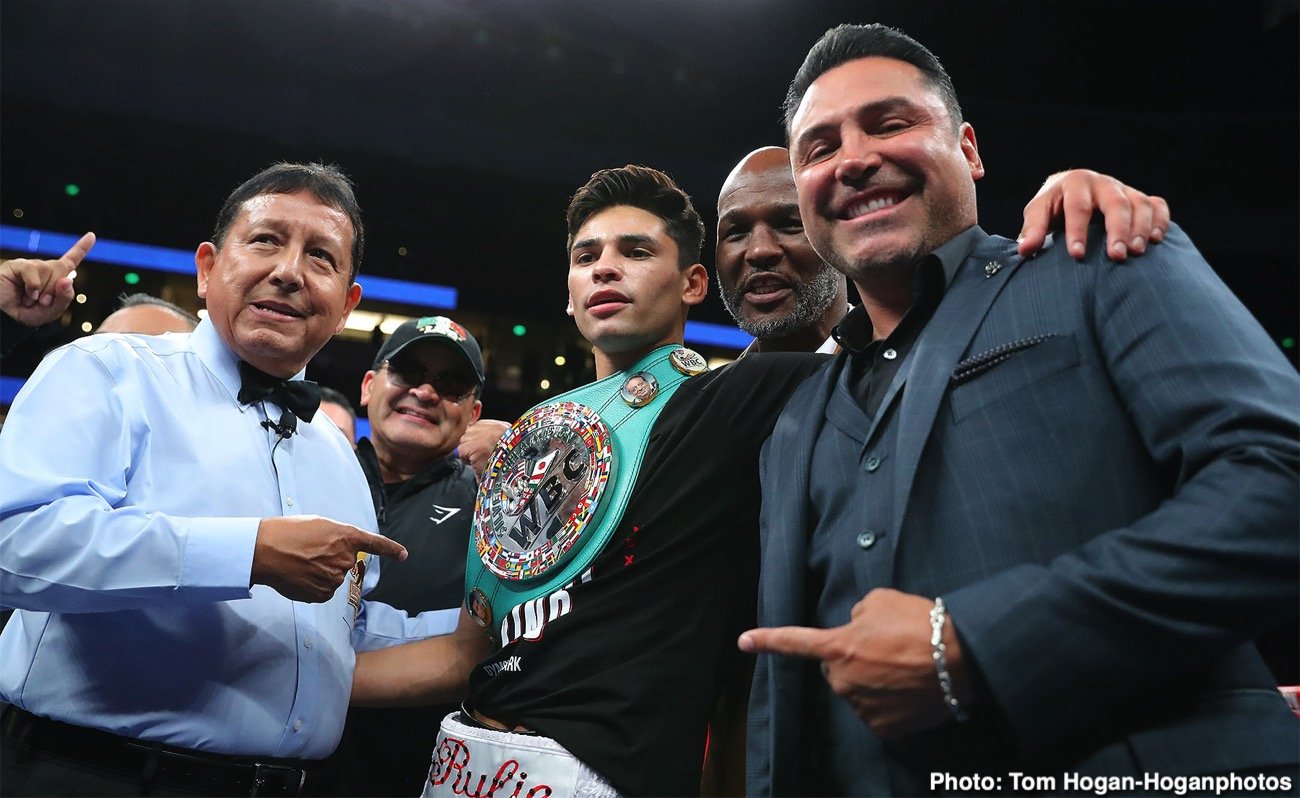 Oscar De La Hoya has already reserved the Staples Center in Los Angeles for the fight between Ryan ‘Kingry’ Garcia and Jorge Linares for July. De Hoya is calling the Garcia-Linares fight, ‘The Clash of the Titans.‘ It’s a great title for the fight, which could reveal whether the 21-year-old Garcia (20-0, 17 KOs) is as good as Golden Boy Promotions believe him to be.

Ryan passed a small test last Friday night in crushing the hapless Francisco Fonseca (25-3-2, 19 KOs) in a first round knockout in a fight streamed LIVE on DAZN at the Honda Center in Anaheim, California.

Garcia loaded up with nothing but left hooks, and eventually caught Fonseca with one that knocked him out. The fight was stopped at 2:09 of round 1.

With his second straight first round knockout win under his belt, Garcia is ready to be moved up to the next level against 34-year-old former three division world champion Linares (47-5, 29 KOs) in July. Linares looked a lot more technical than Ryan in beating Carlos Morales (19-5-4, 8 KOs) in stopping him in the 4th round in the co-feature bout on the Garcia-Fonseca card at the Honda Center.

“Not only is he progressing at a fast pace, the fact that he has the amateur pedigree, we know he can fight. It’s a matter of getting the experience,” said De La Hoya of Ryan Garcia.

“When he knocked out Duno in the first round, which nobody expected, not only did it convince me,” De La Hoya said of Kingry Garcia. “It showed me he’s mentally capable of staying in there with not only tough opposition, but also the critics, the fans.

“I think Linares is the only guy that knocked down Lomachenko, and I believe it was a very close fight before they stopped it. I’ve already reserved the Staples Center for July. It’s a clash of the titans,” said De La Hoya about Ryan and Linares.

Garcia hasn’t fought a skilled fighter yet, and this may be too big of a jump up levels in him facing Linares. There’s a wide gulf in ability between Linares and the guys that Golden Boy Promotions have been matching Kingry Garcia against since he turned pro.

Linares is going to be tough for Garcia, seeing that he’s got the speed, power, and the experience to give him problems

Garcia’s whole game is based on his left hook and his hand speed, and he’s not developing anything else. Garcia is predictable on offense, and he’s just looking for one punch with his left hook. WBC heavyweight champion Deontay Wilder has gone far with his career with him relying on his right hand to win fights. But in his case, 6’7″, and a lot taller than his opponents.

We saw what happened with Roy Jones Jr. and Oscar De La Hoya when they started losing their hand speed. Both were beaten repeatedly. That’s why it would be good for Ryan to develop a good foundation in his game now before he starts losing his speed. However, if Ryan is serious about wanting to retire by the age of 26, it won’t matter. He won’t be around when his speed starts deteriorating.