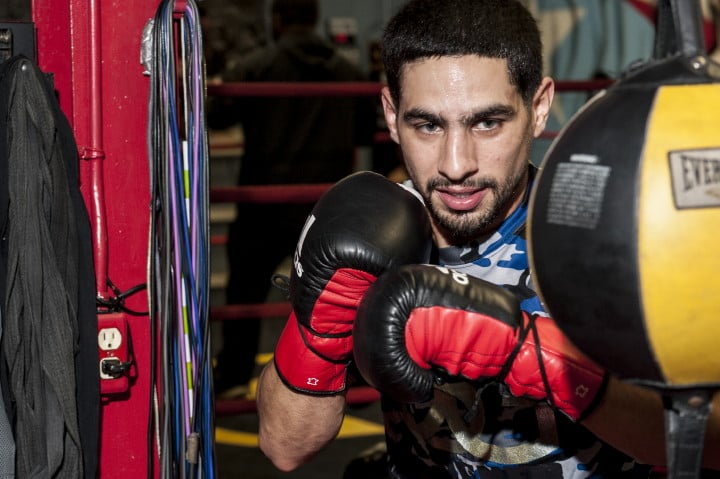 Tickets for the live event, which is promoted by DSG Promotions and King’s Promotions, are priced at $200, $100, $75, $50 and $35 and are on sale now. To purchase tickets visit LiacourasCenter.com/events or call 800-298-4200. Garcia has teamed up with Philabundance, the region’s largest hunger relief organization, to arrange a regional food drive and raise money throughout the promotion. For more information on how to get involved, visit the event’s webpage HERE.

Here is what the participants from Thursday’s event at the Clarion Hotel had to say:

“I’ve dedicated my life to the sport of boxing and I’m proud to be on a card like this. It’s amazing to be fighting in my city with my home base there to support me.

“This is a great opportunity for me. Giving back is very important to me and my family. I have my whole family, including my daughter Philly here with me. It just adds to the excitement leading up to the fight.

“Training camp has been amazing. We had a really smooth camp. I’ve stayed disciplined and taken care of everything I have to do. I’ve been running and sparring and preparing for anything. I took no shortcuts.

“I’m feeling good and I’m happy to bring my fans in Philadelphia a fight. I’m looking forward to bringing more fights back here to Philadelphia. This is a fighting city where it all started for a lot of great fighters.

Read:  Dillian Whyte could be added to Canelo vs. Plant undercard on September 18th

“I’m really excited about this undercard. I know the fans are going to really love it. I hope those fighters take full advantage of their opportunity to fight on a card like this.

“I know people are excited about the Thurman fight. I understand that and I’m going to be pumped up for that one too. But I’m not looking past anybody. I’m fully focused on putting on a show at home and doing what I have to do to beat Vargas.

“There’s not too much to say but I’m really excited to fight. I hope all the fans come out and see what they’ve been missing in Philly. I’m going for the knockout.”

“I had four weeks of intense training in Miami. We were at the Fifth Street Gym and they made us feel at home. I got great sparring and I feel ready to fight.

“This is a fight that I have to be 100 percent ready for. I have to mentally be prepared for battle. Then I just have to execute the plan.

“Danny is a champion for a reason. He does everything well. We just have to find a way to win.

“My trainer, Billy Briscoe, has done an amazing job of working with me and keeping me motivated. It’s been a really good camp.

“I’m looking for the upset that night. Everyone wants to see Danny fight Keith Thurman, but I’m looking to make myself known. I feel confident.

“All I have to do is go up there and do my job. Don’t miss it, because it’s going to be a memorable one.

“I have to dictate the pace of the fight if I want to win in Philadelphia. I have to win decisively. I have to be a smart fighter and I’ll be ready.”

“I’m trying to let everyone know I’m here. I’m here for everyone in the 154-pound division and I’m here to stay. I’m not a guy who’s just going to work my way up but not win a title. My goal is to win a world title.

“It feels really good to be on a Danny Garcia card. We’re both ‘Swift’ so I’m glad fans will have a chance to see two really entertaining fighters on the same card.

“The opponent switch didn’t leave us a lot of time to prepare for a southpaw, but we’re used to the style. Training camp was really great and I’m just excited to get in the ring.

“I really want to thank my trainer, Ernesto Rodriguez, because he’s been with me since day one. We always talked about fighting on cards like this.

“All-year round we prepare for changes like this. Sometimes you get an opponent who is orthodox but he comes out southpaw. We’re always prepared for things like this.”

“I’m thankful to Hurd for accepting this challenge. I’m looking to make a great fight. I’m in great shape and I have no doubt this is going to be an exciting night.

“Hurd is a great fighter. He has an undefeated record and he’s younger than me, but I’m not worried about it. He likes to fight and switch styles. So I know I will have to be ready for anything.

“My training camp was very good. There are no injuries and I’m very thankful to be healthy. I’ve been in the gym a very long time.

“I have a good strategy for this fight. I’m planning on getting in there and testing him out. I think I’m going to have a really good performance.

“When I got the call about this fight I was already in really good shape. I expect it’s going to be an exciting fight for the fans.

“My original weight is still 147-pounds, but this is a great opportunity and I jumped on it. I believe I’m ready to make a splash.”

“I promise you that this fight will not go 10 rounds. I’m telling everybody. I’m going to knockout Omar Douglas.

“My team works so hard and we’re not going to stop until I’m a champion again. Douglas is the next guy I need to get rid of.

“I’m very honored to be a part of a card of this magnitude, especially with one of the best fighters in the world in Danny Garcia.

“I’m coming to fight Douglas on his turf and I’m going to give him a boxing lesson. I’m prepared and I’m ready to go on November 12.

“I’m confident in myself and confident in my team. We’ve prepared extremely well. My goal is to continue to get back to where I was. I want to be a champion once again.

“Danny is 100 percent prepared. Camp went perfectly. He’s hitting hard. I just pray every day that he doesn’t kill anybody in the ring. These aren’t the ‘Looney Tunes.’ This is real right now. Vargas is in with the champ of the world.

“I think Danny is the top welterweight in the world. Danny is going to be undefeated, still, after November 12. Sam is going to come in and work. But it’s not going his way.”

“We went to camp and we prepared to the best of our abilities. Sam knew what he had to do and he took care of everything that he could.

“There’s not too much to say. We understand that we’re fighting a great fighter like Danny. He’s a tremendous fighter and he has great trainer in Angel.

“We’re going to be ready. Sam has put in the hours in the gym that are necessary. We’re looking for a good show and a big shock.”