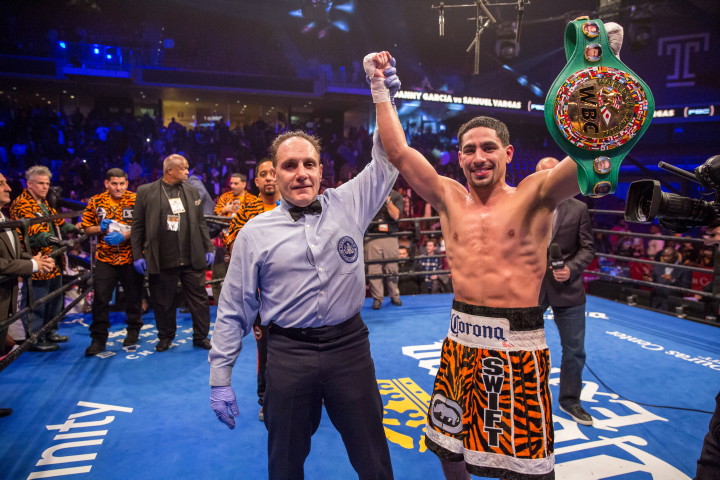 Undefeated world champion Danny “Swift” Garcia (33-0, 19 KOs)put on a show for fans in his hometown Saturday night as he dropped and stopped Colombia’s Samuel Vargas (25-3-1, 13 KOs)on his way to a seventh round TKO victory in the main event of Premier Boxing Champions on Spike from Temple University’s Liacouras Center in Philadelphia.

“I just had to tell Keith that he’s next,” said Garcia. “I’m going to beat him down. There’s not much more to say. Keith is going to get what he asked for and now he’s going to face a big dog.”

Read:  Jermell Charlo: I'll knock him [Castano] out in a rematch'

“You have two big punchers meeting on March 4,” said Thurman. “I don’t see how the fight can go 12 rounds. I see myself as the best competition that Danny has ever faced.”

Garcia was sharp offensively and defensively Saturday night, making Vargas miss often and countering with powerful shots. He started slow but late in the second round, Garcia delivered an overhand right hand that sent Vargas tumbling to the canvas.

“I felt a little rusty,” said Garcia. “But I started putting my punches together well and came out with the victory. The overhand right knocked him down. It was just a well-timed shot.”

“I got beat up in there,” said Vargas. “It takes a lot of courage to come to North Philadelphia and fight the champ. It just wasn’t my night.”

Vargas continued to come forward and work, but Garcia was entirely in control, making Vargas swing at air while delivering shots of his own that kept him in command. In the seventh round, Garcia began to unload with a series of big shots that hurt Vargas on the ropes. This eventually prompted referee Gary Rosato to stop the fight 2:17 into the round.

Read:  Tokyo '64 – When The Great Joe Frazier Refused To Let A Little Thing Like A Busted Thumb Prevent Him From Winning Gold

“Danny is a great fighter and a great person for his city,” said Vargas.

With the March 4 unification fight now set, boxing fans can look forward to seeing two of the best fighters in the sport put their undefeated records and world titles on the line.

“Danny can talk whatever he wants and Angel Garcia can say whatever he wants,” said Thurman. “They can talk smack all day. Danny is real flat-footed. I believe I’ll be able to be on the outside, see the wide punches and counter punch. They said he wanted the tune-up, now he’s ready to see me.”

“On March 4, fans can expect what they always get from me,” said Garcia. “It’s going to be fireworks. I’m a Philly champion. I have the heart of a champion and I’m coming to win and unify titles.”

The smaller Dan sought to smother Hurd from the beginning and negate the previously unbeaten fighter’s advantage in reach and height. Hurd was unable to get full power behind his punches, while Dan tried to hit Hurd with short punches, mainly to the body.

“We knew he was a crafty southpaw,” said Hurd. “We wanted to take our time because we didn’t know how he would come out. We felt him out at first.”

“The weight was a big difference,” said Dan. “I took the fight on short notice and I’m a 147-pound fighter. He was too strong for me tonight.”

Things began to open up for Hurd in round two as he began to tee off on the head of Dan, including a thudding left that caused Dan’s nose to bleed. Hurd continued to pummel Dan, mixing in looping shots to the body with his devastating array of hooks and uppercuts.

“My defense was a little off because being prepared for a right hander,” said Hurd. “We fixed that in the last round and got the stoppage.”

“He was wobbly and shaky,” said Hurd. “I probably would have taken him out in the next round. There are a lot of great fighters in this division and whoever I can get in there with next, I’ll be ready for.”

“He’s a tough guy,” said Dan. “I gave him some tough shots and I took some good shots. At the end of the day this is boxing. I couldn’t do enough to get the win.”

The opening bout of the telecast saw former world champion Javier Fortuna (31-1-1, 22 KOs) survive an early knockdown to come back and earn a unanimous decision over previously unbeaten Omar Douglas (17-1, 12 KOs) in their 10-round lightweight match.

Douglas got off to the better start, connecting with a straight left hand late in the first round that buckled the knees of Fortuna and sent him to the canvas.

“He got me cold in the first round,” said Fortuna. “I wasn’t surprised that he came out sharp. I worked very hard to come back.”

“The left hand was there for me so I took it,” said Douglas. “I knocked him down based on reflexes.”

Fortuna recovered nicely however, and used his movement and combination punching to fluster the less experienced Douglas. Fighting primarily out of the southpaw stance, Fortuna used his jab and followed up with flurries that score consistently.

“Every time that I was aggressive, I tried to follow it up with more punches,” said Fortuna.

Douglas tried to be patient and counter, but too often it led to the fighters getting tangled up instead of inflicting damage.

The final round saw Fortuna come out strong in an attempt to close the show with emphasis.

“I knew in the final round that I had to finish it well to make sure there were no questions,” said Fortuna.

The former champion connected at will on Douglas for much of the round, staggering him near the ropes with successive hooks. Douglas stayed on his feet but was unable to mount enough offense as all three judges gave the final round to Fortuna. In the end, the judges scored the bout 96-93 twice and 95-94 for Fortuna.

“I feel like I won the fight. The decision was absurd. He held me the whole fight,” said Douglas.

“I felt like I won just about every round after the first,” said Fortuna. “I want a rematch with Jason Sosa next. That’s a very big fight for me.”

PBC on Spike was promoted by DSG Promotions and King’s Promotions.