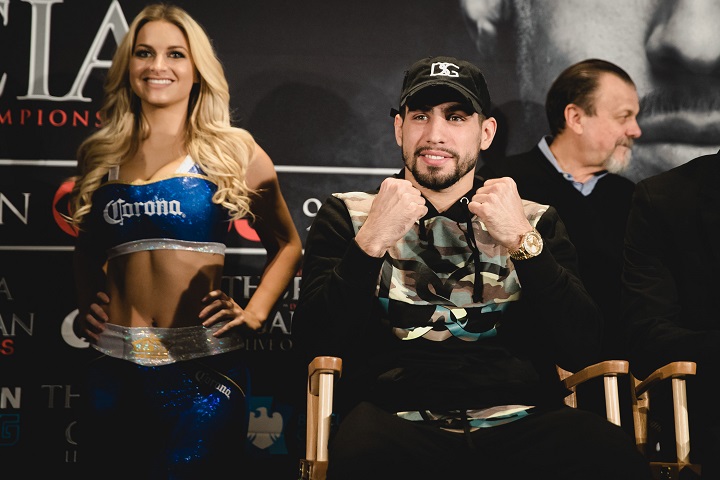 Showtime Boxing will be televising a welterweight match between former world champions Brandon ‘Bam Bam’ Rios (34-3-1, 25 KOs) and Danny ‘Swift’ Garcia (33-1, 19 KOs) on February 17 in Las Vegas, Nevada. Garcia vs. Rios will be the main event in the main event on Showtime televised card in Vegas.

Rios won his last fight in June against Aaron Herrera in making a comeback after being out of the ring or 1 ½ years. Rios looked pretty good in knocking out in 7 rounds. Rios looked much better than former WBO welterweight champion Jessie Vargas in his recent 10 round decision win over Herrera on December 15.

Rios hasn’t held a world title since 2011, when he was stripped of his WBA lightweight title after failing to make weight for what was supposed to be a title defense against John Murray. Rios has been kept busy by Top Rank in fighting Mike Alvarado 3 times, Manny Pacquiao, Tim Bradley, Diego Chaves and Richard Abril. Rios is no longer with Top Rank. If he was still with them, he’d likely have gotten a title shot against WBO welterweight champion Jeff Horn.

Former WBC welterweight champion Danny Garcia lost to Keith Thurman by a 12 round split decision in a unification fight last March for his first loss of his career. It was a close fight, but Garcia came up short because of a slow start.

Rios will likely be seen as the underdog by the odds-makers for the Garcia fight, but you can’t rule out a victory for him. Garcia has the better boxing skills and punching power. Garcia can fight dirty at times if he needs to. Garcia’s fight with Lucas Matthysse is a perfect example of him fighting dirty to get a win. Garcia was hitting Matthyse with low blows the entire fight, and that seemed to take something out of the Argentinean.

The loser of the Rios vs. Garcia fight will be in bad shape. It would be Garcia’s second straight loss, and Rios’ 4th defeat in his last 7 fights.