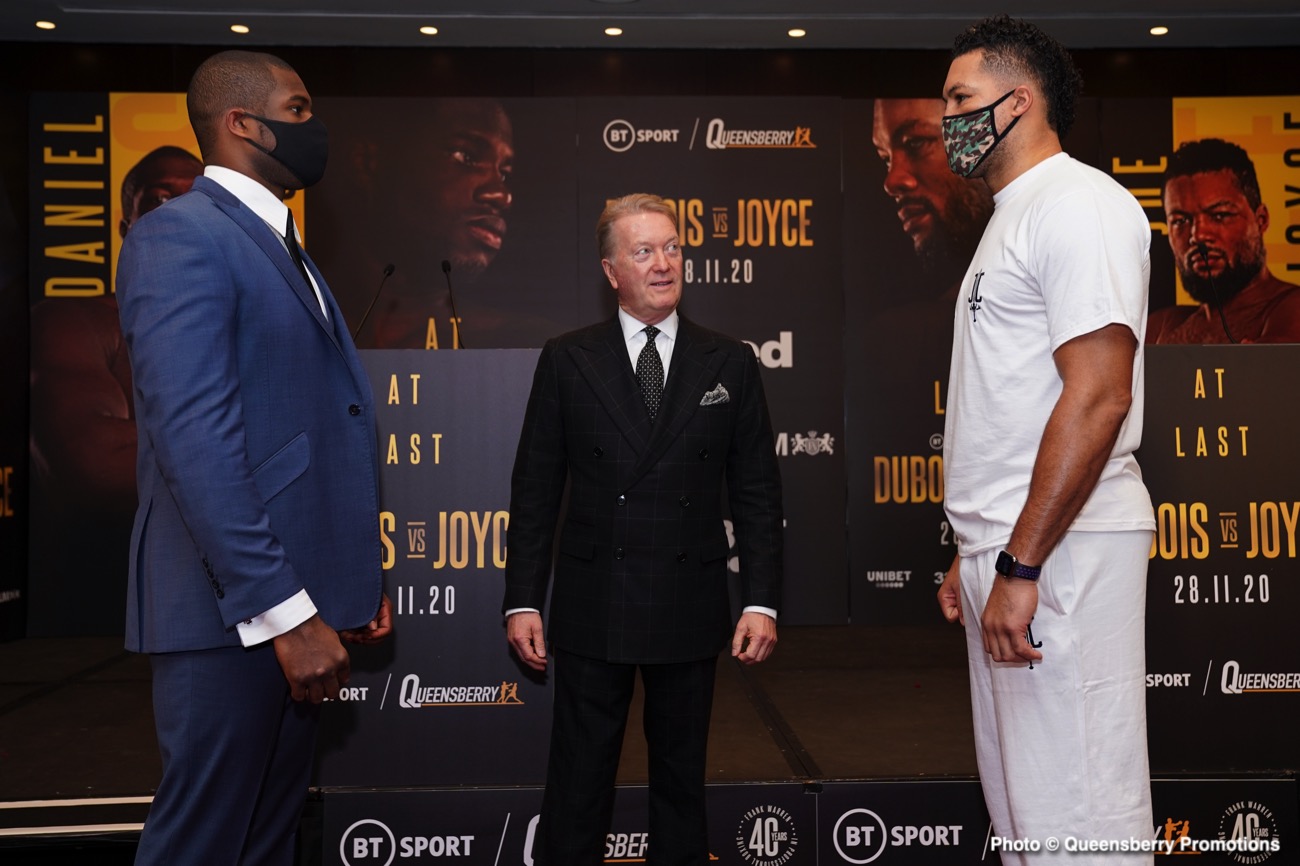 DANIEL DUBOIS: “I’M GONNA BREAK JOE DOWN, CHOP HIM UP AND SEND A MESSAGE TO THE WORLD”

JOE JOYCE: “I WILL PUNCH DUBOIS UNTIL HE’S DOWN”

The unbeaten Londoners collide in an explosive 12 rounder at Church House, Westminster on Saturday (November 28) live on BT Sport, on a Queensberry Promotions bill.

‘Dynamite’ Dubois (15-0, 14 KOs) will be defending his British, Commonwealth, and WBC Silver titles against Olympic silver medallist ‘Juggernaut’ Joyce (11-0, 10 KOs). The vacant European championship is also on the line.

The clash is one of the biggest fights in Heavyweight boxing, and the winner will be in line for a world title challenge next year.

Dubois, 23, is ranked at number two by the WBO and seventh by the WBC. Joyce is highly ranked by the IBF, WBC, and WBO.

Here is a selection of quotes from today’s event. 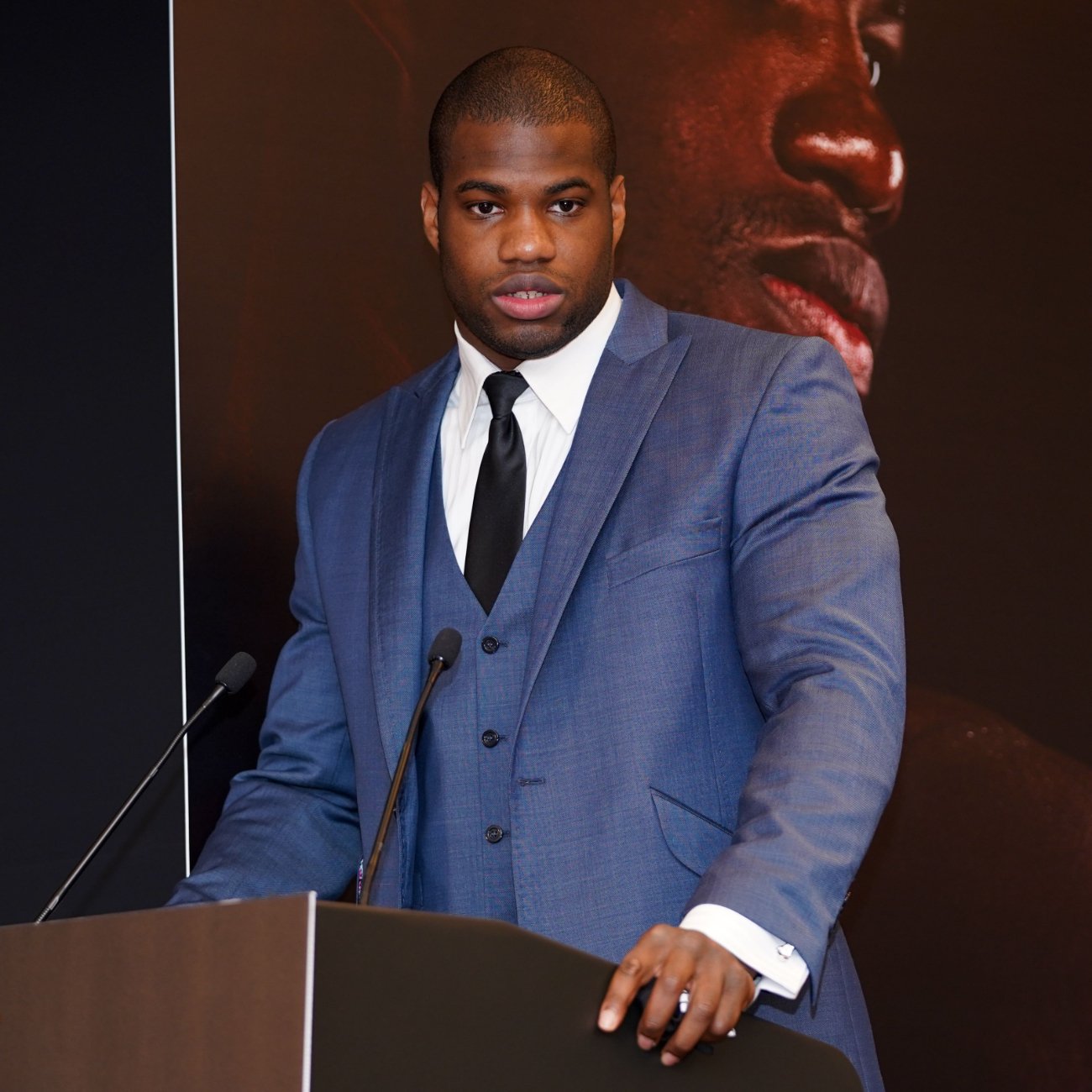 It’s 40 years of promoting for me on December 1, and this is the most mouth watering fight, three days before that anniversary. What makes it special? They are tremendous Heavyweights who have done everything asked so far.

It rarely happens that they fight at this stage of their careers, but when the fight was put out, they both wanted it and didn’t take a backward step. That tells you their self-belief. They believe they have the beating of each other.

There is no give in either of them. Joe’s got tremendous amateur experience, was robbed of the Gold medal in the Olympics. He brings that to the table. Daniel has dedicated his life to boxing, and look at what he has done after having had just seven senior amateur fights.

On the day you have all the experience and punching power of Joe, we have the young, hungry lion who wants to get out and show what he has got. Daniel is a tremendous puncher and capturing everyone’s imagination.

It’s got the ingredients of an amazing, amazing fight. Whatever happens, the winner will become new mandatory for the WBO or fight Usyk for the vacant title if Anthony Joshua fights Tyson Fury. People talk about Daniel like he is a one-trick pony and has a big punch, but he has a great jab. 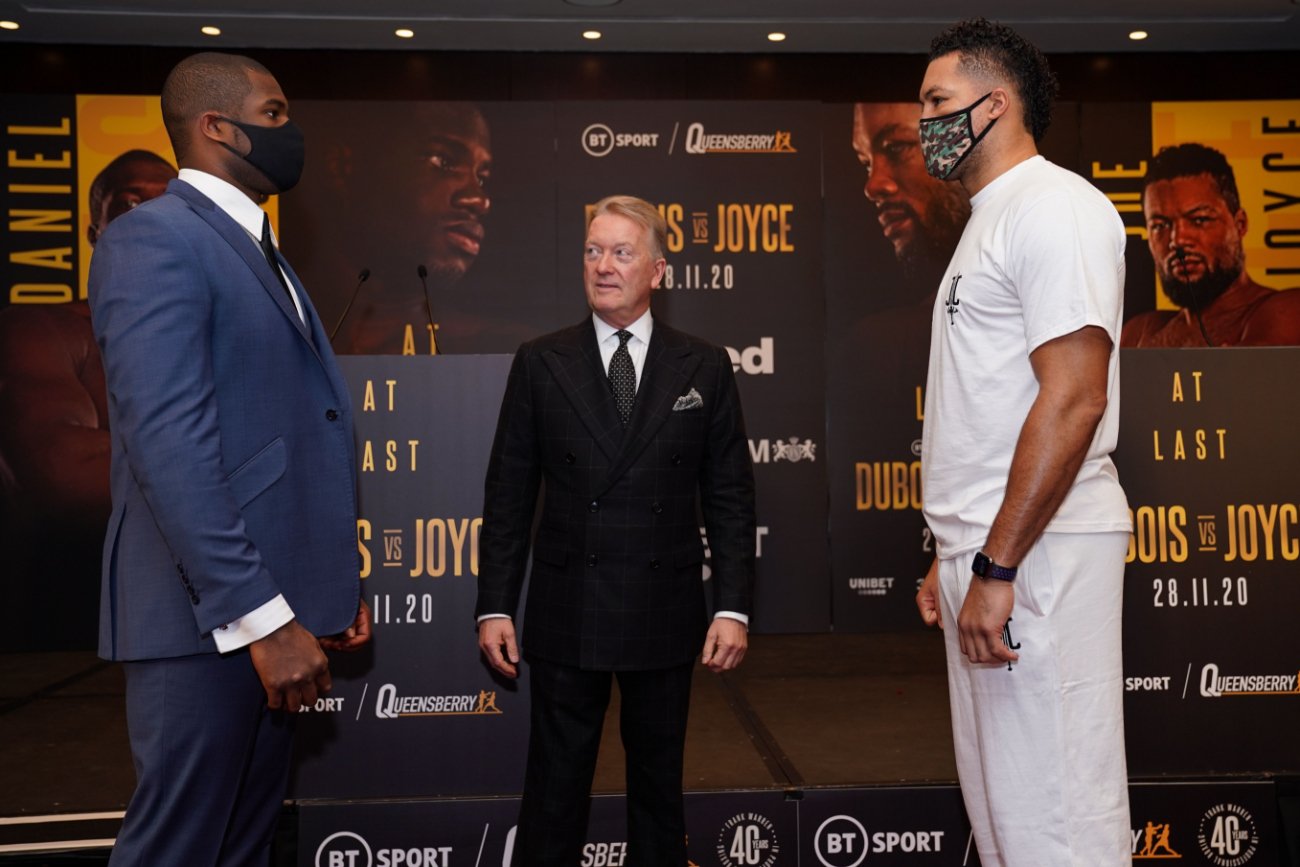 It is superb. Every fight he brings something else. Joe will bring the best out of him. That’s why it is a phenomenal fight. How do I see it? Whoever controls this fight from the beginning will be the winner.

This is it — a big moment in time for both of them. The winner is in a big time. If you’re going to watch any fight this year or in the next 12 months, this is the one.

I feel confident and left no stone unturned in training. I am not intimidated by his experience. He has never been in with a fighter like me before, and I’m ready to go. I’ve accomplished what I’ve needed to, and it’s my destiny.

You can argue some guys he beat were past their prime. I am young and hungry. I am ready to go 12 rounds, no problem if I have to. I am ready for a long, hard fight but also a quick one.

I have the power in both hands to take him out. I will break him down and chop him up. People haven’t seen the best of me. This fight will show I can do something else.

I am looking forward to showing my whole repertoire and skill. I want to win devastatingly and knock him out. I want to send a clear message to the rest of the fighters in the Heavyweight division and the world I am coming. I’m ready for war. 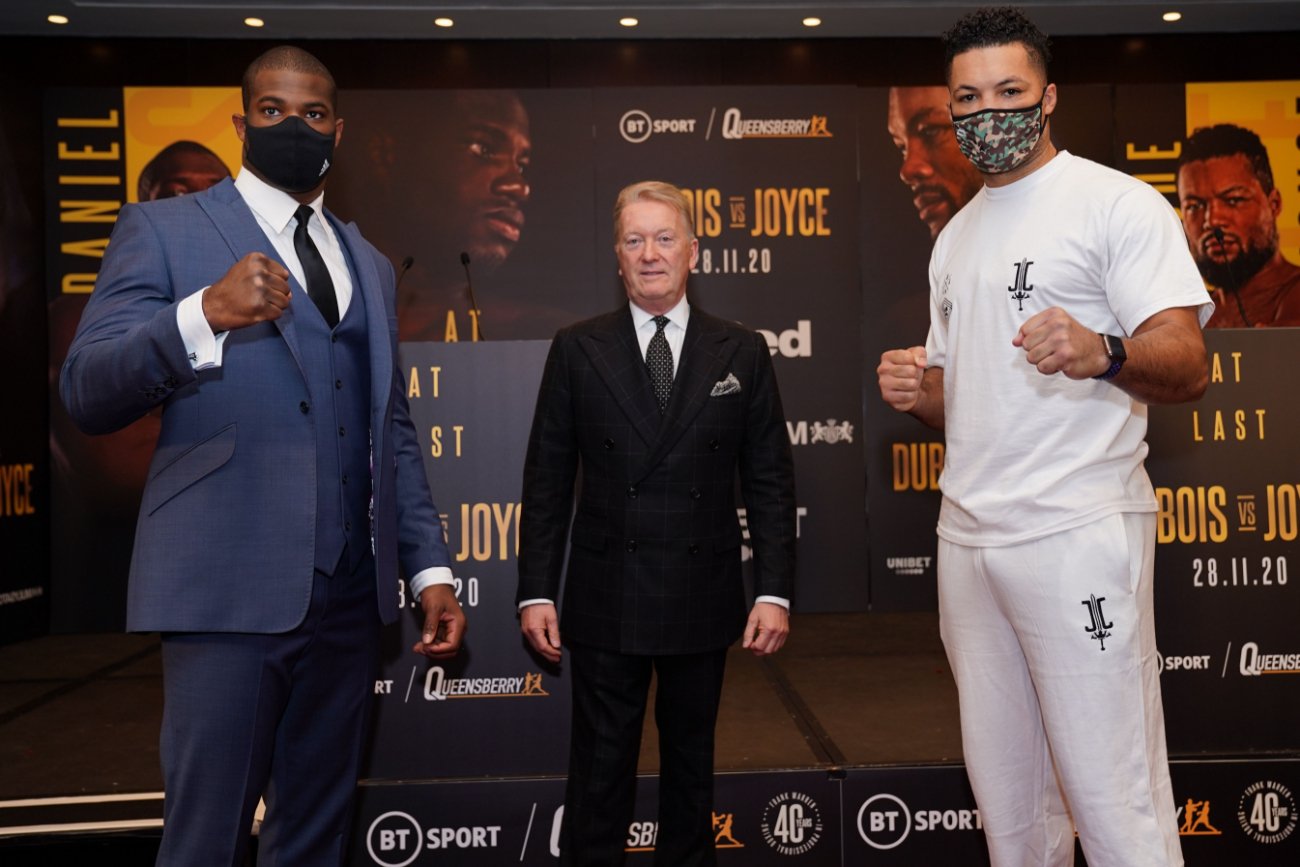 I am not under pressure. I am confident and ready to do the business. The bookies have Daniel in a good position, so he has the pressure to deliver. I’m the underdog and coming to take him out.

I don’t care if people have written me off. My amateur experience makes a difference. I have been there and been tested. There are no questions about my ability and my achievements.

Dubois hasn’t done anything in the Senior amateurs or quite yet in the pros. I feel I have achieved more in my fewer professional fights than he has.

I have had the test and answered questions. I’m in a place where I’m ready to go for that world title. I have seen him knockout guys, but do you think I wouldn’t have knocked out those guys?

I have power in both hands, I have a good chin, my engine is good, and I’m ready to go 12 rounds if need be. If I see the opportunity, I will punch him until he’s down. If his power doesn’t put me down, he is in a heap of trouble.

I’ve taken big punches and kept going forward. I prefer not to take the big shots. I want to move out of the way and not get hit. I’m not blessed with speed, but I hit the target and keep coming.

I don’t want to leave it to chance. I want to go to work, find my range, and knock him out. I have nothing to say to him except respect your elders, and he will do on Saturday night. 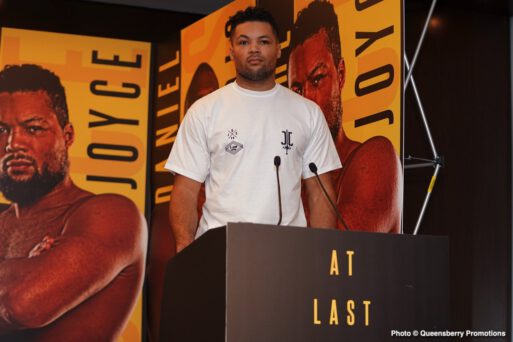 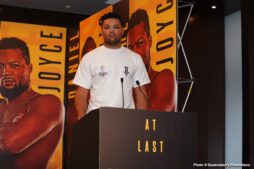 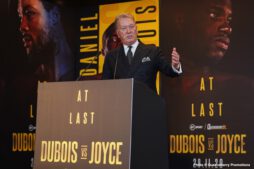 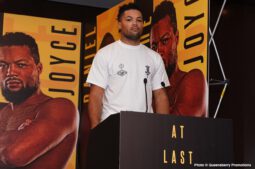 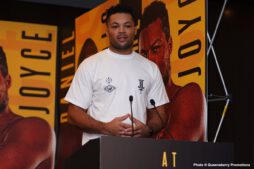 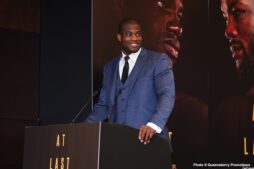 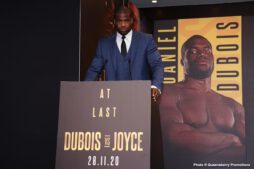 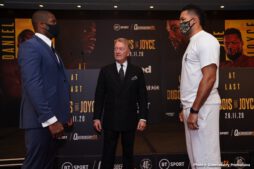 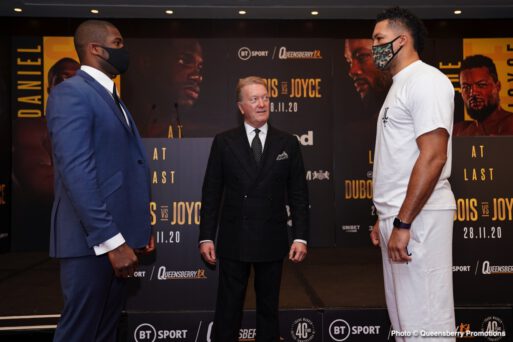 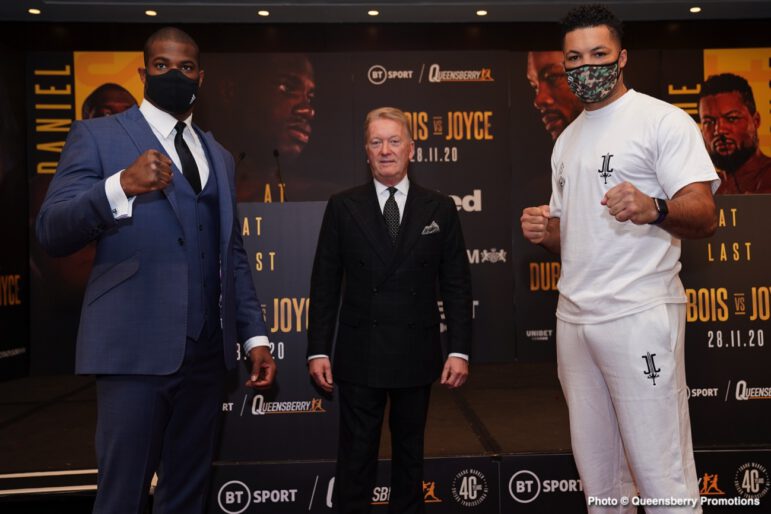 AT LAST: DUBOIS vs. JOYCE IS LIVE THIS SATURDAY AT 7.30pm ON BT SPORT 1 HD