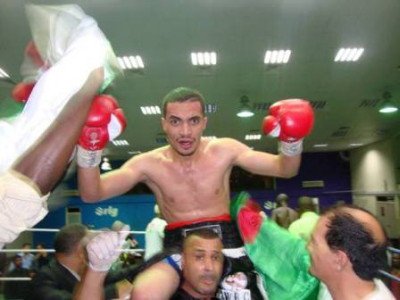 Fighting in front of a massive crowd at the D.G. Hathiramani Hall of the Accra Sports Stadium, 21 year old Dahou defied the huge home advantage of Dodze, flooring the Ghanaian in round 2 of their scheduled 10-rounder before the corner of the Ghanaian couldn’t take it any longer, throwing in the towel in round 3 much to the delight of Dahou.

“He’s a good boxer, very strong with good punches so when the referee stopped the fight, I was very happy to become a world youth champ. I really trained hard for this fight with so I’m delighted to win this title for the people of Algeria and I promise it’s just the beginning of bigger things to come,” Dahou told the Ghana-based website www.sportsinghana.com at ringside.

“I’m going to take a one-week break to rest then get back to training in preparation for a defence of my title against a good opponent. I obviously want to win the WBC world title itself but now I have to work harder than this and fight more against good boxers and I think within two to three years I will be ready,” a very confident Dahou added.

Meanwhile, Nasreddine Dahou and his team lead by his father and manager, Mokhtar Mohammed Dahou as well as trainer, Benaceur Khaled, flew out of Ghana to Algiers just hours after the fight.