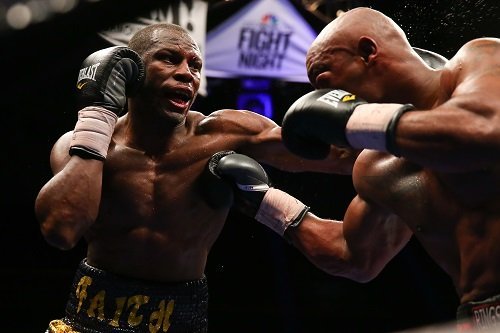 Photo: Rich Graessle/Main Events — The more experienced Steve Cunningham (27-6, 12 KO’s) survived two fifth round knockdowns to go on and beat USBA heavyweight champion Amir Mansour (20-1, 15 KO’s) by a 10 round unanimous decision tonight to win by the scores 97-90, 95-92, 95-92 at the Liacouras Center, in Philadelphia, Pennsylvania, USA.

Cunningham put Mansour down on the canvas in the 10th and final round with a right hand after getting him off balance from a series of rights to the head. Mansour’s left eye was almost closed at the time from the heavy shots he’d absorbed from Cunningham.

Cunningham looked finished in the 5th round after getting put down on the canvas twice by Mansour. Cunningham got back up after the 2nd knockdown, after getting a close look by referee Steve Smoger, he was able to keep out of the way of Mansour’s punches to survive the round.

Cunningham’s legs were completely gone at the end of the round, and he continued to look shaky for the first half of the 6th. Mansour tried to land a big home run punch to finish Cunningham off, but he didn’t have the reach to connect. Mansour could have helped himself if he had jabbed his way into punching range like most shorter fighters do, but he kept throwing bombs from long range, and missing badly with them. This was a pattern that Mansour repeated all throughout the fight unfortunately.

In rounds 7 through 10, Cunningham was able to land his jabs and short right hands to puff up Mansour’s left eye. Mansour left himself open frequently for Cunningham’s shots by badly telegraphing his shots with the way he would wind up before throwing. This enabled Cunnnigham to nail him both before and after he would throw.

Johnson came out aggressively in the 10th round as he had in the previous rounds, and Stevens was able to connect with a perfect left hook that shook Johnson. Stevens followed up with some additional hard shots that sent Johnson reeling backwards to the ropes. This is where it kind of controversial, as Stevens threw a blizzard of slapping punches that mostly missed against a cowering Johnson. At this point referee Gary Rosato stepped in and stopped the fight at 2:09 of the round.

The question is did the referee halt the fight prematurely? I think it was a good stoppage, because Johnson was badly hurt and still staggering after the fight was stopped. Had the fight been allowed to continue, Stevens would have had massive amounts of time to throw nonstop head punches against a pretty much defenseless Johnson, who had stopped punching the moment he was hurt.