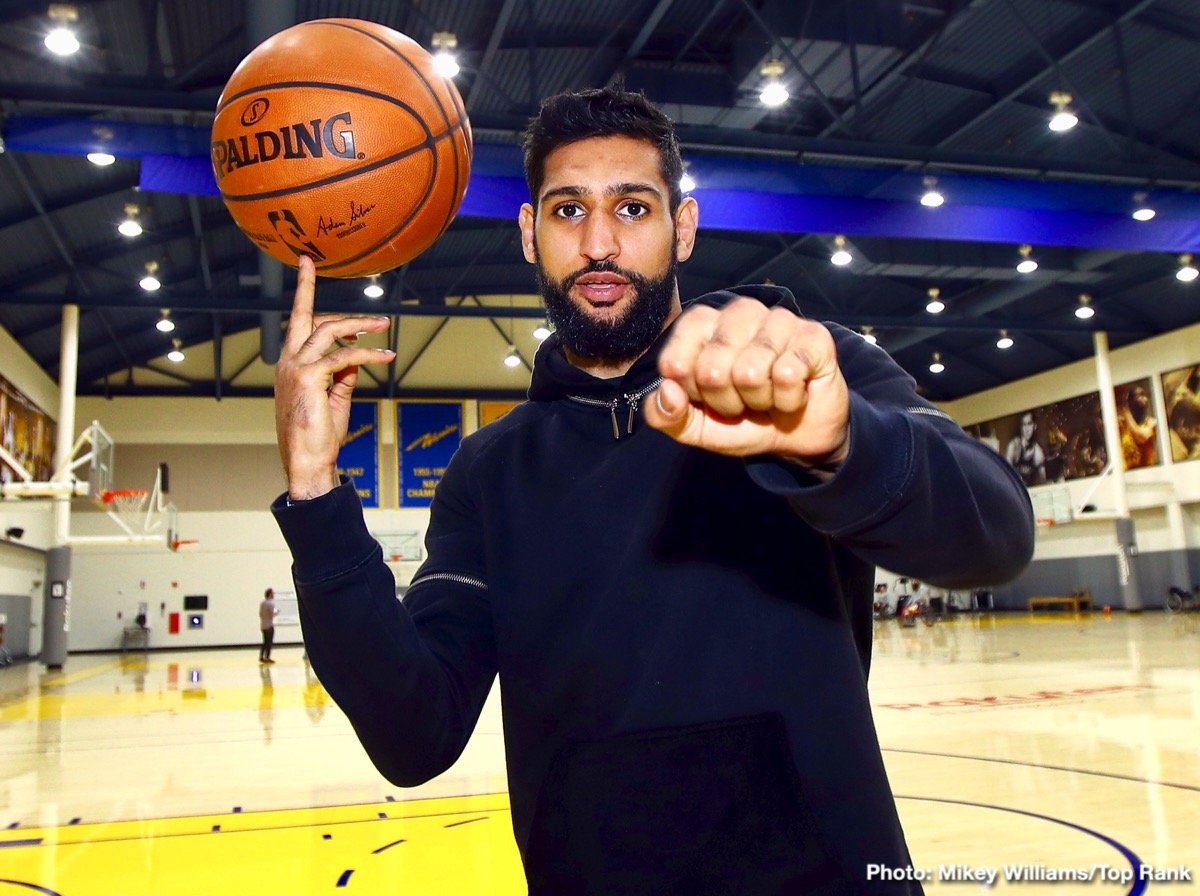 The “King” of boxing in the United Kingdom met the kings of the NBA. Before continuing his preparation for his April 20 world title showdown against pound-for-pound kingpin Terence “Bud” Crawford, former world champion Amir “King” Khan (33-4, 20 KOs) made a pit stop Monday at the Golden State Warriors practice facility to meet the players and staff of the two-time defending NBA champions.

Immediately following the Warriors practice, Khan returned to the gym as he prepares to challenge Crawford for his World Boxing Organization (WBO) welterweight title at Madison Square Garden. 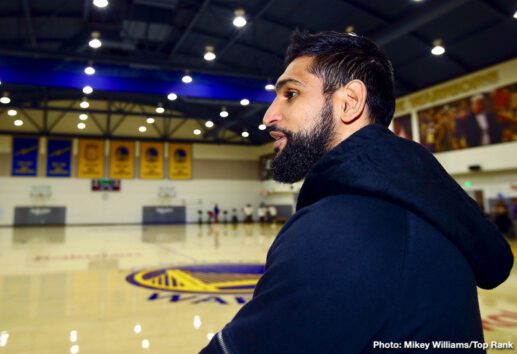 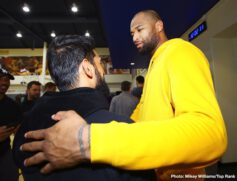 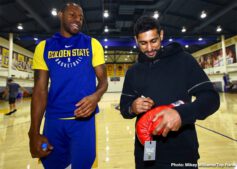 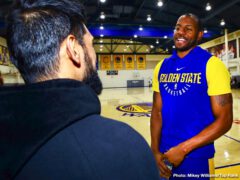 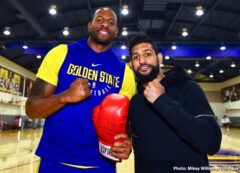 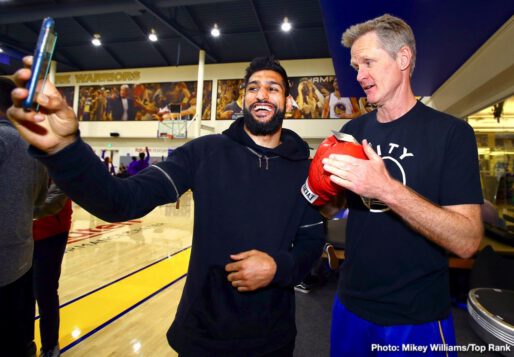 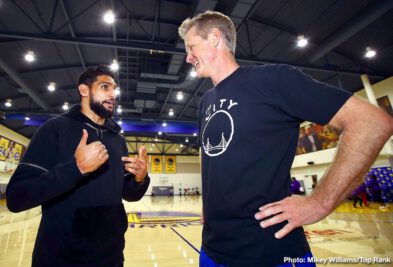 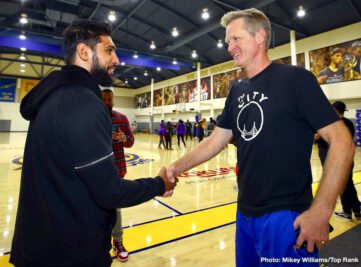 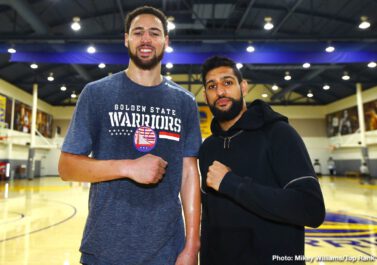 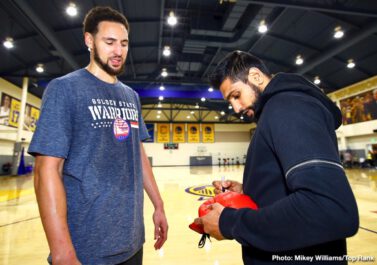 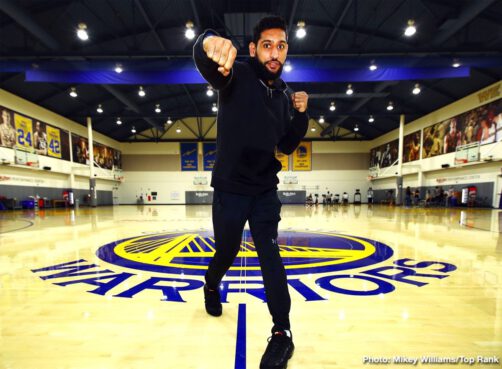 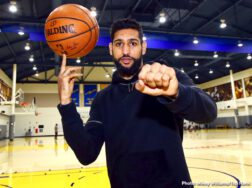 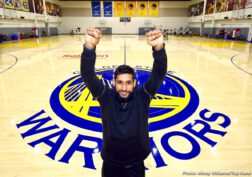 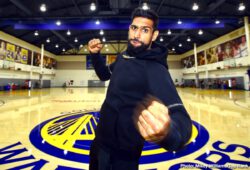 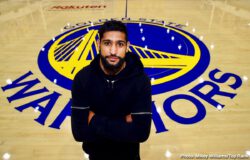 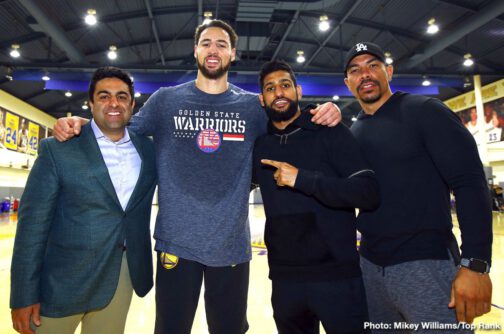 Start spreading the news. The year’s most anticipated welterweight showdown is headed to The World’s Most Famous Arena.

Undercard bouts and details on how fans will be able to access the pay-per-view event will be announced at a later date.

“I can’t wait to head back to New York City and Madison Square Garden for this fight with Amir Khan. The Garden is the perfect venue for a fight of this magnitude,” Crawford said. “I know that my fans will make the trip up to New York and I’ll have a ton of support when I step in to the ring. I expect Khan’s British fans to come out as well, and I believe we will have a packed house on April 20. It’s going to be a great fight so make sure to get your tickets early.”

“New York is undoubtedly one of my most favorite cities in the world, and it’s like a second home to me,” Khan said. “This is the biggest fight of my career against one of the world’s best in Terence Crawford, and Madison Square Garden is the perfect venue for a fight of this magnitude. It’s a short flight for my fans from the United Kingdom, and they will be coming over in droves to see this fantastic fight. I want to become a three-time world champion, and that is my primary motivation to win this fight.”

“Terence Crawford is one of the top pound-for-pound fighters in the sport, he always puts on a show at Madison Square Garden, and we’re excited New York fight fans will be able to see him fight again at The Garden on April 20,” said Joel Fisher, executive vice president, MSG Marquee Events. “This will be an action-packed fight between Crawford and Amir Khan, and The Garden is excited to host this great night of boxing.”

Crawford (34-0, 25 KOs), widely regarded as the world’s best fighter, is a three-weight world champion who has knocked out five consecutive opponents. A former undisputed 140-pound world champion, Crawford won the WBO welterweight title in June 2018 with a ninth-round stoppage of Jeff “The Hornet” Horn. He defended the belt in October with a 12th-round TKO over bitter rival Jose Benavidez Jr. in his hometown of Omaha, Nebraska. This will be Crawford’s second headlining appearance at the big arena at Madison Square Garden. In May 2017, he knocked out 2008 Olympic gold medalist Felix Diaz in 10 rounds.

Khan (33-4, 20 KOs), a former unified world champion at 140 pounds, has won two in a row since his 2016 knockout loss to middleweight champion Canelo Alvarez. He is 4-0 in his career when fighting as a welterweight, including wins over former world champions Devon Alexander, Chris Algieri, and Luis Collazo. Khan headlined at Madison Square Garden once before when he defended his WBA 140-pound world title against Paulie Malignaggi at The Theater on May 15, 2010.