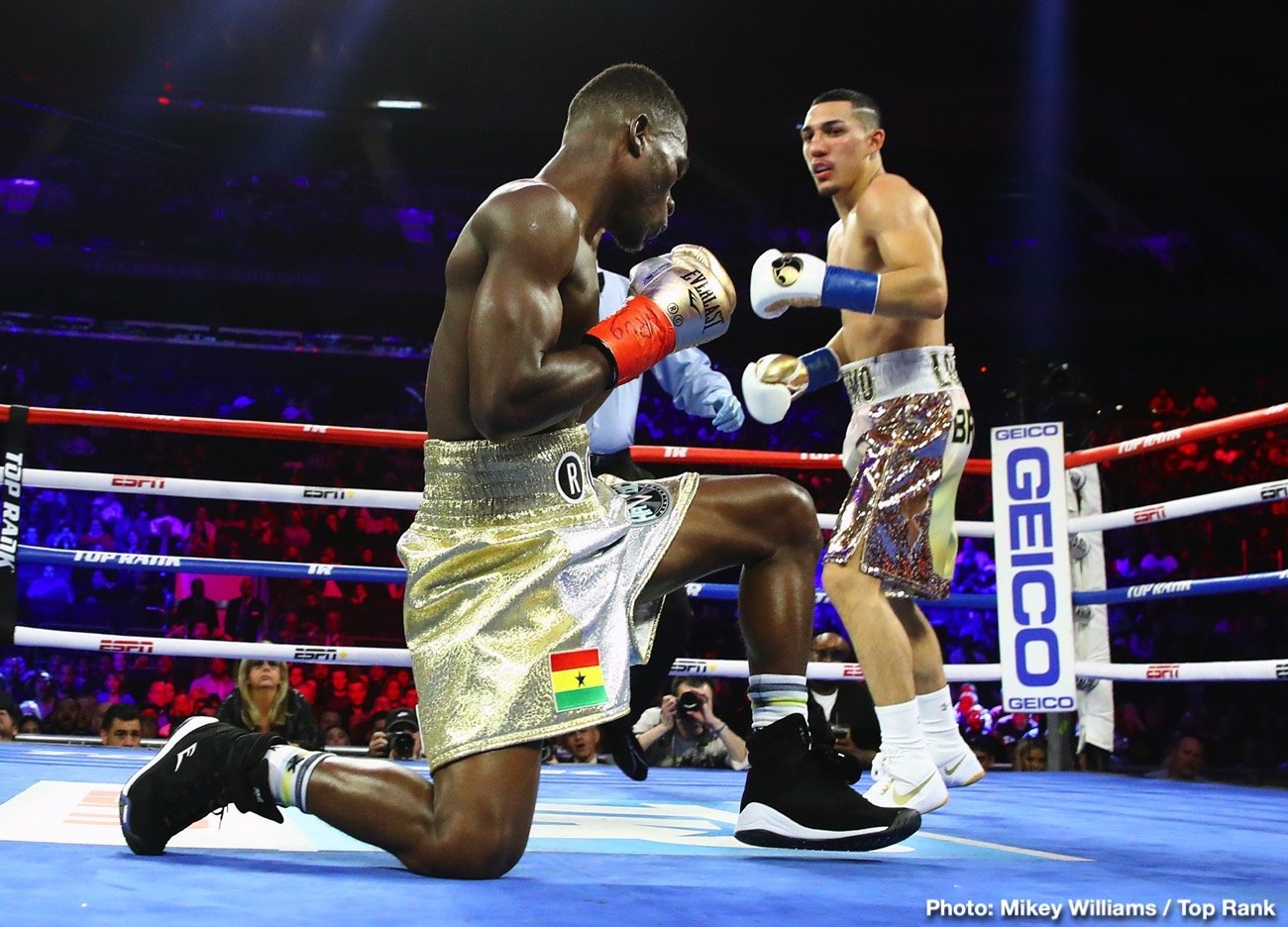 Undefeated Teofimo Lopez (15-0, 12 KOs) crushed IBF lightweight champion Richard Commey (29-3, 26 KOs) by a 2nd round knockout to become the new IBF champion on Saturday night at Madison Square Garden in New York. Lopez will now face Vasiliy Lomachenko next in a unification fight in the early part of 2020.

Commey, 32, was knocked down in the 2nd round. He got back up, and was stopped by a hail of power punches from the young Teofimo. The fight was stopped at 1:13 of round 2.

WBO welterweight champion Terence Crawford (36-0, 27 KOs) retaind his title with a 9th round knockout win over mandatory challenger Egidijus Kavaliauskas (21-1-1, 17 KOs). Crawford, 32, knocked Kavaliauskas once in round 7, and two more times in the 9th round before the fight was halted by referee Ricky Gonzalez.

The final knock down from Crawford was from a right hand to the side of the head. When Kavaliauskas was going down, Crawford added a parting rabbit shot for good measure.

That last one was arguably an illegal punches, but the referee didn’t say anything about. It wouldn’t have mattered though even if he did waive it off. Kavaliauskas was getting dominated by that point in the fight, and he had no answers for the pressure that Crawford was putting on him.

The refeeree missing a knockdown in the 3rd round in which Kavaliauskas dropped Crawford, but it was mistakenly ruled a slip. That was a pretty bad call by the referee. It’s unclear how he missed it though because Kavaliauskas lit Crawford up with a four-punch combination in close, and those scoring shots were seen by everybody but the referee, who somehow missed it.

All in all, it was possibly best performance by Crawford since his win over Yuriorkis Gamboa in 2014. It was good to see Crawford standing in front of Kavaliauskas going toe-to-toe with him rather than getting on his bike, and trying to keep away from him.

Crawford wants to be seen in the same light as the popular Premier Boxing Champions welterweights Errol Spence Jr., Shawn Porter, Keith Thurman and Danny Garcia, but he’s not been willing to make his fights exciting theirs until tonight. Hopefully this is a new beginning for Crawford, because this is how he needs to fight every time out if he wants to be a populat welterweight instead of a spoiler.