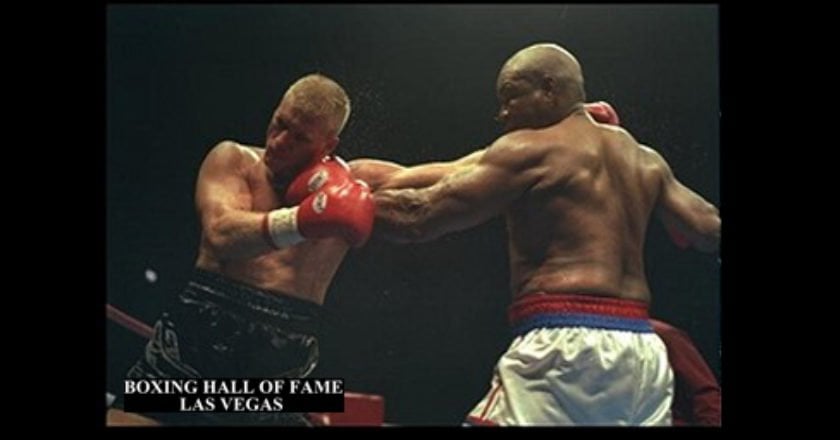 Talk about a big, strong, determined heavyweight who for a short time hooked up with the big names. To widely different results. Crawford Grimsley of Florida, nicknamed “The Terminator,” had a brief kickboxing career, before the 6’2” heavy had a go at pro boxing. Oh, and Grimsley was and is white.

Going pro in February of 1994, Grimsley went 20-0(18) – the Ivan Drago look-a-like being extended beyond the first-round just six times. Then the 28-year-old got a shot at living legend George Foreman. Foreman, having just his second fight since making boxing history by taking out Michael Moorer and regaining the heavyweight crown some 20 years after losing it to the incomparable Muhammad Ali, took his show (and his lineal and WBU titles) on the road.

Foreman had struggled badly against Axel Schulz – the German as little known a figure as Grimsley when entering the April 1995 fight – and “Big George” had since been stripped of the WBA and IBF belts he had won by smashing Moorer. But George didn’t care. He was old-school. He was still THE champ. Foreman had not lost the titles in the ring, therefore the 46-year-old was still the man. Not too many people accepted Foreman’s claim – preferring to believe Evander Holyfield, who upset Mike Tyson in November of ’96, was THE man.

But for Crawford, the shot at Foreman, in Tokyo, Japan On November 3, 1996, was the chance of a lifetime. And Crawford lived to hear the final bell against the fighter whose powerful fists had wrecked men like Joe Frazier, Ken Norton, Ron Lyle, Gerry Cooney and Michael Moorer. It was no great fight, yet it was a great achievement on the part of Grimsley. He had shown he had a chin, that he had stamina, that he belonged. Well, not really.

In his very next fight, Grimsley, caught cold, was taken out in a little over ten-seconds by Jimmy Thunder. The blur of a wipe-out became a popular view on YouTube (far more interest given to this flash of a fight compared to the 36 minutes Grimsley shared the ring with Foreman – make of that what you will), and unfortunately, Grimsley was now looked at as a joke figure. Unfair treatment from the fans, for sure.

Grimsley fought on, travelling to Denmark to rumble with Brian Nielson in his next outing (being stopped in the 6th), and then scoring a quick KO win of his own, this in Aruba – before Grimsley won one in Florida, then drew in Florida, before going out with a loss in Prague, Czech Republic. It was indeed quite a ride for Grimsley.

There was talk of a fight with Michael Moorer, but instead, Grimsley disappeared, his final record reading 22-4(20). Grimsley has not been seen since his 2002 retirement. What an interesting interview he would make.

Grimsley is one of only seven men to have fought 12 long rounds with Foreman. Make of that what you will.