There has been talk of a Conor Benn-Chris Eubank Junior fight for some time now, with nothing confirmed. However, it seems the fight does indeed ‘have legs,’ as the saying goes. The respective promoters are staying shtum right now, but writer Gareth A. Davies has appeared on Talk Sport, and he says the fight is “going ahead.” According to the almost always reliable and in-the-know Davies and what he has had to say, the fight will be fought at an agreed catch-weight of 155 pounds and it will happen some time in the autumn/fall of this year.

“I’m happy to say this fight is going ahead,” Davies said. “I’m not announcing it, obviously, because it’s not my prerogative to do that, but my understanding is this fight is sealed. They both want it, both teams want it, the Sauerlands have taken Chris Eubank Jr to DAZN, to Eddie Hearn – they have a great relationship as we know – Conor Benn wants the fight. Conor Benn fights at welterweight, so to step sideways for the ‘Legacy Fight,’ As Conor Benn tweeted, is an amazing thing. My understanding is, with Conor Benn fighting at 147 and with Chris Eubank Jr having campaigned largely at 160 pounds, he’s going to come down to 155 pounds. That’s what I’m hearing, so [Eubank Jr] is going to have to lose a bit of weight.” 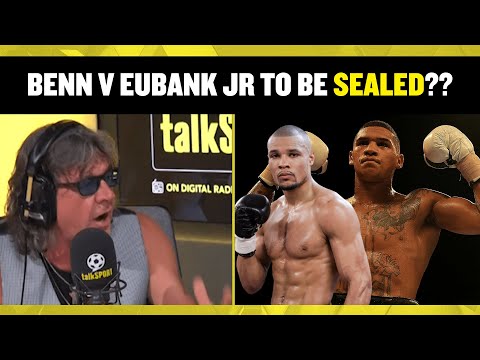 If this fight does happen – “The Legacy Fight” as it has already been dubbed – it will be huge in the UK. Back in the 1990s, Chris Eubank and Nigel Benn captivated the nation with their bitter two-fight rivalry. One can imagine the hype and the build-up to the ‘Juniors’ fight already! But is this one realistic? Can Eubank, 32-2(23) who has fought some big fights up at 168 pounds, really get down to 155 and not be seriously compromised? On the other hand, is Benn, 21-0(14) too small for a fight at 155?

Let’s wait and see if what Davies is hearing turns out to be the real deal. But again, if this one does come off, the ticket sales and the pay-per-view numbers will go through the roof.