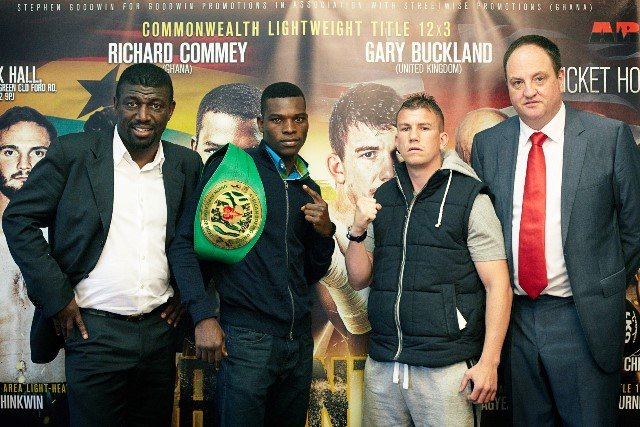 There is no turning back now as Richard Oblitey Commey’s date of destiny approaches ever quicker with his Commonwealth Lightweight date against Gary Buckland now on July 12 barely days away.

The unbeaten Ghanaian’s long awaited quest to wear the Commonwealth Lightweight belt takes centrestage at the York Hall, Bethnal Green in London next weekend when he squares up against Welshman Gary Buckland for a title he first got the opportunity to fight for a year ago.

One fighter after another had failed to make it into the ring for the bout for the British empire belt with Commey even making time in-between to fight for and win the African Boxing Union (ABU) Lightweight title on December 26.

After compatriot Benjamin Ashley and his team also failed to get travel clearance to make it to the fight in London, Gary Buckland (28-4, 9 KOs), a 28 year old former British Boxing Board of Control (BBBoC) Super Featherweight champion finally agreed to face the undefeated Ghanaian (17-0, 17 KOs).

“Well the preparation is going well, Richard has been in the UK since February and with the disappointments of the fight being cancelled on a number of occasions we are glad to be heading into the last week of his training,” Michael Ammo Bediako, Commey’s UK based manager said.

“With fight night ever nearer, publicity has gone overboard on social media and networks and the mood is starting to change around the gym that what we have worked for so long is only around the corner,” Amoo Bediako added revealing they are working hard to get a local television network to screen the fight live in Ghana.

Team Commey have also added new aspects to the boxer’s training regime and a new strength and conditioning trainer, Chris Barnes who has been working with Richard at the Pro SW Gym in Loughton, Essex. Barnes has introduced workouts to help the boxer’s upper body and leg strength as well as his conditioning, under the astute eye of Richard’s trainer, Carl Lokko.

The boxing coach has been coordinating all of Richard’s training and the sparring has been intense with r chief sparring partner, Mitchell Smith who also trains out of the Pro SW Gym. Mitchell is the current Southern Area Super Featherweight champion and he is in training for his English title shot against Peter Cope which is only 4 days after Richard’s fight.

“Mitchell is the perfect size and stature that we need as he is a similar build to Gary Buckland but in my opinion Mitchell is technically a better boxer and the two of them have really helped each other out and the sparring has brought electricity to the gym,” Michael Amoo-Bediako said.