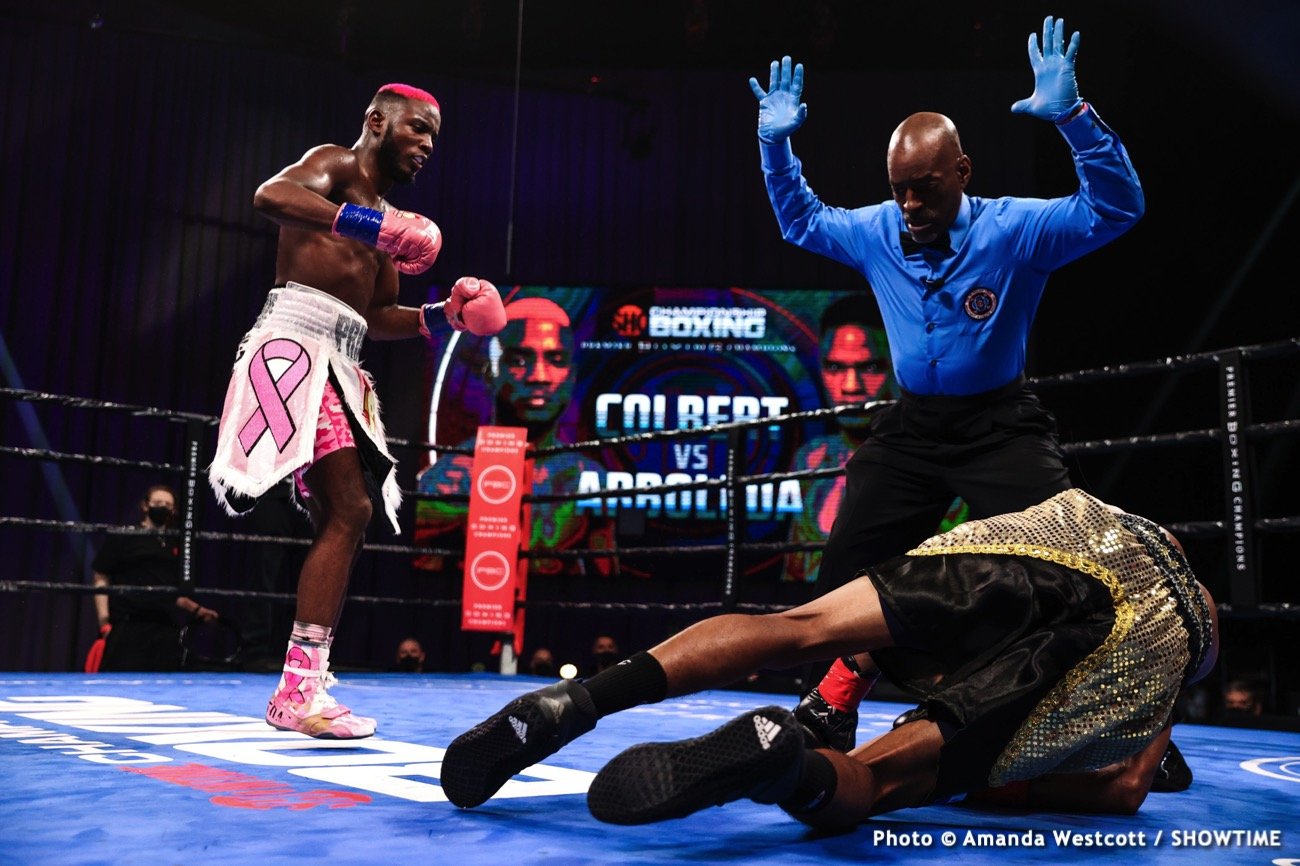 At the end of an action-packed ninth round, the flashy Colbert (15-0, 6 KOs) sent the WBA No. 4 ranked Arboleda (16-2, 13 KOs) to the canvas for the fourth time in his career when he caught him with a vicious left hook.

Arboleda survived, but in round 11 Colbert knocked Arboleda down twice early in the round and followed up with an unanswered flurry that convinced referee Steve Willis to stop the fight at 1:37 of the penultimate round.

“I dominated the whole fight,” said Colbert. “I probably gave him two rounds, but that was by choice.

I just wanted to build his confidence because I knew I was going to stop him in the later rounds. I came to show the 130-pound division that I can punch. I’m here and I’m here to stay.

“I’m more than just a flashy boxer. I can stand in there and bang. I know there were close rounds in the fight, but I understood that as it was happening. It was part of the game plan. I knew what I was doing. I was wearing him down to knock him out late. I did what I said I’d do.”

Colbert was docked a point for a low blow in the eighth round and at the time of the stoppage all three judges scored each round identically and had Colbert ahead 98-90.

“I just kept my head up after the deduction and kept coming strong,” said Colbert. “I had to come out here and put on a dominating performance. I talk a lot, so I had to make sure I backed it up.”

The Panamanian Arboleda was the much busier fighter in Saturday’s main event, throwing almost 300 more punches (709-411) than Colbert. However, Brooklyn’s Colbert out-landed Arboleda 184-153 and relied heavily on his lightning quick hand speed and stylish defense to stymie Arboleda’s attack.

The 24-year-old Colbert, who was making his SHOWTIME debut in his first televised main event, proved that he is a legitimate threat in the talent-heavy 130-pound division.

The Brooklyn, N.Y. native Hitchins, who represented his parents’ home country of Haiti in the 2016 Olympics, used his superb jab to counteract Mendez’s power punches. The 23-year-old Hitchins landed 57 of his 198 jabs thrown compared to Mendez’s 12 of 90. Mendez landed 80 of his 256 power punches, including 44 shots to the body, compared to Hitchins’ 60 power punches landed out of 135 thrown. Mendez came on late in the fight and was more active over the second half of the bout, but was unable to overcome Hitchins’ jab.

“I rate my performance a B-plus,” said Hitchins, who fights out of the Mayweather Promotions stable. “I think I might have lost one round. I could have gotten an A if I put a little more hurt on him, but I knew his defense would be tight. I’ve watched him since I was a kid. I knew he was a smart fighter. With the amount of experience I have compared to him, it was a great performance.

“Now I have my first world champion under my belt just 12 fights in. It’s a tremendous honor. I haven’t been boxing as long as he’s been professional. I’m proud of myself.” 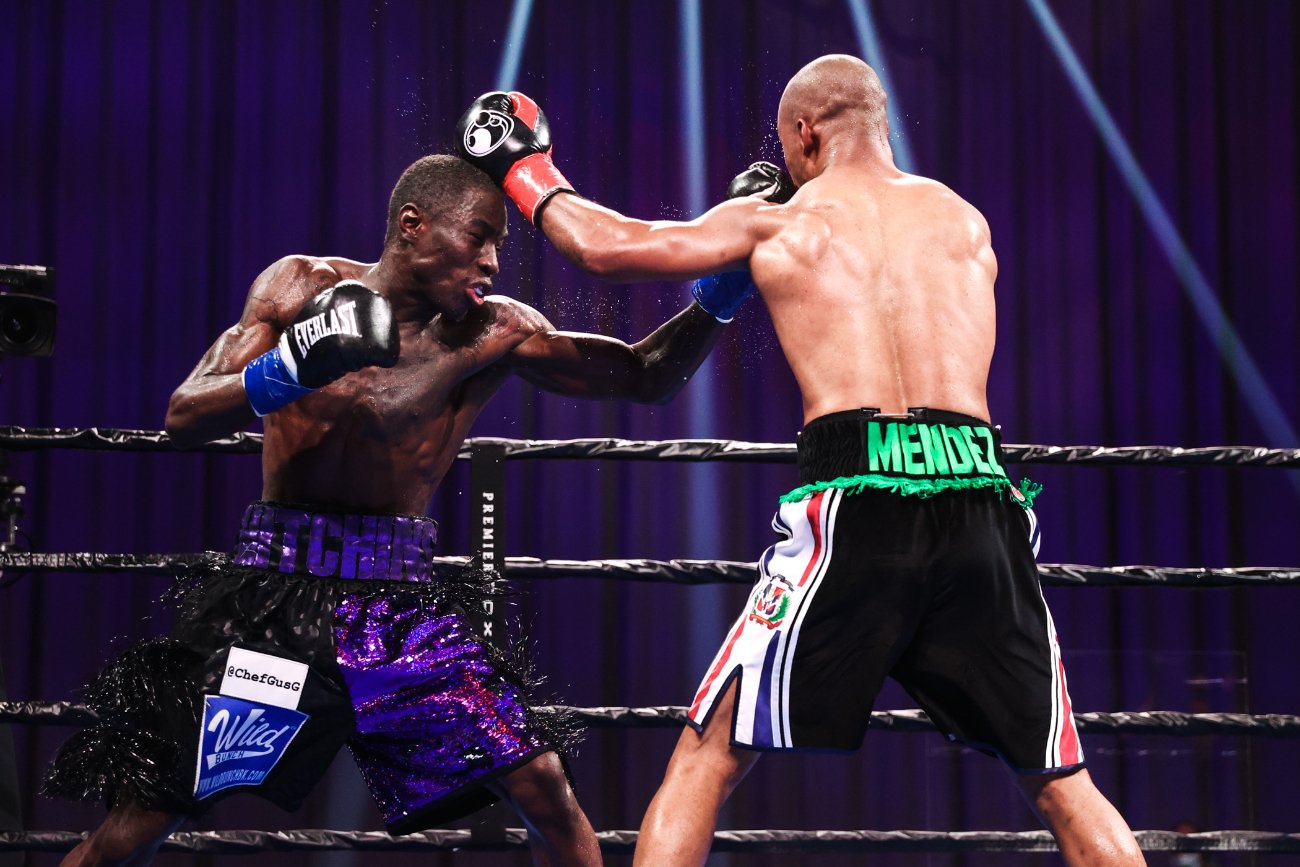 In the telecast opener, Ronald Ellis (18-1-2, 12 KOs) was victorious by fifth-round TKO after 37-year-old veteran contender Matt Korobov (28-4-1, 14 KOs) suffered a fight-ending injury in his second straight appearance. In the fourth round, Korobov injured his left Achilles and prior to the start of the fifth round, the fight was stopped upon the advice of the ringside physician.

At the time of the forced stoppage, Korobov was ahead on two of the judges’ scorecards, with the third having it even after the four completed rounds. Over the first three rounds, Korobov landed two more punches than Ellis (22-20) and in the fourth round, Korobov upped his output, throwing a fight-high 56 punches with 11 connects.

The bout was contested at super middleweight after the 31-year-old Ellis came in five pounds above the middleweight limit at Friday’s official weigh-in. In Korobov’s last bout, he suffered a left shoulder injury and was unable to continue against Chris Eubank Jr.

“I know he dies out in the later rounds so I was going to step on it in the second half of the fight,” said Ellis, a native of Lynn, Mass. “It’s been a while and I know that this wasn’t my best performance. He’s awkward, he’s a southpaw. He wasn’t giving me that much but I was trying to beat him by a few punches each round. I heard the announcers say that I wasn’t throwing as much as I usually do but I was giving what I was getting. After I heard that, I stepped it up. Once I saw that his leg was hurt, I was nervous we were going to the scorecards because he might have grabbed early rounds.”

In non-televised undercard action, highly regarded featherweight prospect David Navarro scored a first-round KO for the second time in as many professional appearances. The 21-year-old Los Angeles native opted to forgo the chance to represent the U.S. at next summer’s Olympic Games in Tokyo, and has since displayed his power with two first-round KOs in the span of two months.