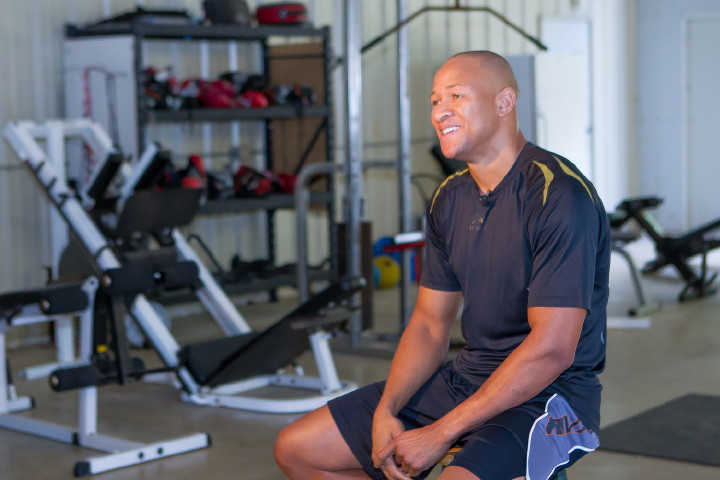 Yesterday, Isaac “Golden Boy” Chilemba (24-4-2, 10 KOs) held an open workout for members of the media in advance of his upcoming fight on November 19 against Oleksandr “The Nail” Gvozdyk (11-0, 9 KOs) for the NABF Light Heavyweight Title on the Kovalev-Ward “Pound For Pound” HBO Pay-Per-View televised undercard live from T-Mobile Arena in Las Vegas.

Question: How did you become a boxer?

Chilemba: “I was born in Malawi. When I was 14 one day I was walking around and friend of mine asked me if I want to come to the boxing gym with him. I looked in the window and I was just drawn to it. When I saw boxing I thought, ‘Wow that’s me.’ I walked in and asked them how to start and they said I could start now. I took off my flip flops and that was the beginning.”

Q: Have you done anything new to prepare for this fight?

IC: “I have been a professional fighter for ten years. During that time, I have figured out what works for me. I have been sticking to that stuff but we keep adding new stuff too. Now that I am working with Roy Jones there is a lot of new stuff added to my routine. He has added things to improve my style. But as far as conditioning goes I stick to the same. Everything has been going well so far.”

Q: Did you know about Roy Jones as a child?

IC: “Growing up I looked up to Roy. When I started boxing the fighter I most wanted to be like was Roy Jones. As far as movements and putting combinations together, I would sit at home and play Roy Jones’ DVD and try to take his talent and make into mine. It is very overwhelming that I am actually here today.”

Q: Have you fought in front of an audience this large before?

Q: What can you tell me about your opponent?

IC: “I don’t know much about him. He is tall. I love fighting tall fighters (laughs). I know he is a well-accomplished amateur. Even though he only has 11 pro fights I believe he has all of his experience from the amateurs. He is undefeated. However, that doesn’t bother me at all. All I want to know is he good enough to be on my level?”

Q: Why do you enjoy fighting tall fighters?

IC: “It is easier to hit higher than lower (laughs). Listen, it doesn’t make any difference whether you are tall or short, it comes down to how intelligent and how quick and how much you really want what you are doing. That will determine if he really belongs at this level. All I know is that I will come out of the fight victorious. I cannot say I will go in with Mike Tyson-like defense. I will go in with one plan, if that doesn’t work I will adapt. I love to have all the tools with me.”

Q: What is your strongest tool?

IC: “My will. My heart. I am determined to get somewhere. That is my strong-suit. My will is what keeps me going.”

Q: Are you planning to continue to train with Roy?

IC: “Yes, of course. I think this will be me until my body can take no more.”

Q: What is it like to be trained by Roy?

IC: “It is amazing. It is something I cannot express. I cannot believe I am here training with my idol.”

Q: What has he taught you?

IC: “As a fighter growing up I looked up to him. I copied everything he does and tried to make it into my style. Before now I did not understand why he does the things he does. I just copied what I could see on the TV and my computer. Now I am here and he has explained to me why he does what he does and how to take a step one after the other. It is amazing. It is mind-blowing.”

Q: Why do you think you are going to win?

IC: “I believe in myself. I believe in my abilities. I want to prove to the world that I still have everything and I will be the great fighter I have always wanted to be. Gvozdyk is just something in my way that I am going to destroy.”

Q: You seem like such a nice guy. How can you say you are going to destroy something?

IC: “I never thought of myself as nice. It is my nature to be nice to people who are good to me. But when it comes to boxing I have goals that I want to accomplish as a fighter and anyone that I am fighting is like a block in my way. There is no nice way to penetrate through that and in order to do that I have to destroy. When it comes to fighting I am no longer a nice guy. Outside the ring you can be nice but inside the ring you cannot. That is what I am trying to do.”

Question: What can you tell me about Isaac and how did you two get connected?

Jones: “Isaac is very good. He is one of the top-ranked light heavyweights in the world today. He is a very good fighter. I first saw him fight about six or seven years ago and I thought he could be something special. I called him and told him I would like to work with him. The only thing was he was fighting Sergey Kovalev. So I told him that we would wait until after that fight and then he should come to train with me. This guy can fight. I know he can fight. We decided that after the Kovalev fight we would get together. He came here to see me after the Kovalev fight. We both thoroughly enjoyed it. I saw where he had been lacking. Now we are working to correct those things.”

Q: Why do you train fighters?

RJ: “Because I love it. I love giving back to the sport. I feel it would unfair if I didn’t give back to others what I have gained. I love the competition. I love the underdog. I love taking fighters to the next level. The reward for me is that I was able to effect somebody’s life. I was able to take what God gave me and pass it on to somebody else and make their life better as a result. The fact that I can use what God gave me and help make somebody else better that is what I get out of this.”

Q: Talk about working with Isaac.

RJ: “I love training Isaac. His whole career he wanted to be like me. So many people have told him that he can’t be like Roy Jones Jr. They told him to quit trying to fight like Roy Jones Jr. But what they really meant is that they don’t know to teach him to fight like me but instead they told him he just couldn’t do it. I understand how to teach him. He can do some of the things I do. He can’t be Roy Jones Jr. There is only one Roy Jones Jr. I can’t be him and he can’t be me. I wanted to be like Muhammad Ali, that is why I started boxing. I can’t be Muhammad Ali. We always draw a picture of what we want to be in our minds. Now he can learn a lot of reasons why I do the things I do and he can be a better student of the game.”

Q: How far has he come along since you started working together?

RJ: “Isaac has come a long way in a short period of time. I am not so surprised because he had a lot of my movements down already but he just didn’t know why he was doing them. The more we work together the better he is going to get. It is just a matter of time. I am really impressed with him. From what I can tell he wasn’t having a good time in camp in the past. That is what Roy Jones is all about, having a good time while training. You must enjoy your job. If you don’t enjoy your job, then why are you doing it? I enjoy training. I enjoy teaching him.”

Q: What is your prediction for the fight?

RJ: “I think it will be a good fight. I understand Gvozdyk is a very good fighter. Isaac has never been knocked out. Isaac is relentless. He loves what he does. He was in the ring with the toughest puncher in the world, Sergey Kovalev, and even Kovalev couldn’t knock him out.”

Q: What are Gvozdyk’s best attributes?

RJ: “He is a straight puncher. He has power in both hands. He is not a bad fighter at all. I like him. He is quick.”

Kovalev vs. Ward “Pound For Pound”, a 12-round mega-fight for the WBO/IBF/WBA light heavyweight title at T-Mobile Arena in Las Vegas, is presented by Main Events, Roc Nation Sports, Krusher Promotions and Andre Ward Promotions and is sponsored by the MGM Grand Hotel & Casino, Corona Extra, Zappos, JetLux and Monster Products. The championship event will be produced and distributed live by HBO Pay-Per-View® beginning at 9:00 p.m. ET/6:00 p.m. PT. Tickets are available on axs.com and the T-Mobile Arena box office.