You know the thought process some people have when they watch a great fight, a slugfest, a war, a battle of attrition – they say and feel that the two men in the ring are ‘giving too much.’ Larry Merchant said as much when he commentated on the first Marco Antonio Barrera-Erik Morales classic. The two Mexican icons went to war three times.

In terms of the experts, the commentators of the day, this way of thinking was surely the case 65 years ago, when bitter rivals (and they really were bitter) Carmen Basilio and Ray Robinson fought. Yes, it might be seen as poor form, sacrilege even, to have Robinson’s name placed second to Basilio’s, but these two kings of the ring did end up all-even at 1-1, their two savage, give too much wars seeing both emperors go to a place precious few fighters have ever had to go.

Both men won the world welterweight crown – Robinson by defeating Tommy Bell, Basilio by beating Tony DeMarco. Both maestros had their up and downs; losing titles, regaining them, forging their respective legend. And then they fought each other.

It was back in September of 1957 when Basilio, a two-time welterweight champ (having lost the crown to Johnny Saxton, only to get his revenge in the sequel), moved up to challenge Robinson for the world middleweight championship. Basilio was offended by the way Robinson controlled things at the negotiating table; the respective paydays of the two sluggers especially.

Robinson was notorious by this celebrated stage of his career for threatening to pull out of a fight if things were just, not, right, just to his liking. And Sugar Ray would often demand more money ahead of a fight, and then threaten to withdraw his services if his demands were not met.

“He’s an arrogant and greedy man,” the humble onion farmer once said of Robinson.

Yet when these two waged war in the ring, there was nothing but mutual respect – that and a ton of adulation from the viewing fans. In short, Basilio and Robinson took each other to another place, an horrific place; the hell room only the fighters with the biggest hearts are ever familiar with.

Fight-one was, some say, the greatest fighter ever. Basilio presented relentless pressure, his stamina, his willingness to take as well as give, his toughness and heart something to behold. Robinson boxed beautifully, he jabbed, he landed some serious hurt, he took everything and anything that came his way, and the was just as unwilling as his challenger was when it came to giving in. In the end, Basilio won a split decision – scores being 9-5-1 Basilio, 8-6-1 Basilio, and 9-6-1 Robinson.

Both men were exhausted at the end, maybe even before then. Neither great had much time to decide what was next. The rematch came just six months later, and this time the war was even more brutal and damaging, even more savage. There never was a rubber-match. And plenty of the old guard say, thank Go to that. We may have seen a fatality if these two had given all they had left in a third fight.

But regardless of that, it was on this day, 65 years ago, when Carmen Basilio was the best fighter in the entire world. Welterweight king, middleweight king. If he’d cared about the distinction, Basilio was also the pound-for-pound king. 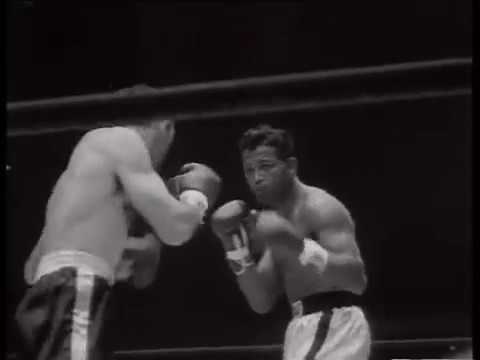