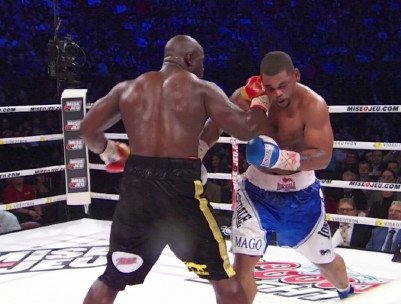 After a slow start the fight began to build in excitement as Carlos Takam began to become the stalker and applied great amounts of pressure. He brought a left hook to the body around the guard and a right uppercut to the body under the guard. Takam also brought a chopping right hand to Perez’s head. Perez early used a sweeping left hand to get around Takam’s guard but he was unable to hurt the Cameroonian fighter and was unable to reestablish control of the bout definitely losing round six on. Perez also made critical mistakes by backing straight out and getting caught by long right hands of Takam. One such example could be seen in round ten where he caught Perez solidly with a straight right hand and poured it on until the end of the final round. Round six saw Perez in possibly the most trouble he was in during the fight when an uppercut shook him up and was followed by a strong left hook. An overhand right snapped Perez’s head back and the bell came to the rescue. At the end of the fight it was clear that Takam had won the last five and he also won at least won one of the first five and probably should have won. While the draw is not a terrible robbery, Takam should have had his hand raised.

Carlos Takam resembled a larger Jean Marc Mormeck in his appearance and fought an eye opening performance. While it’s tough to say if the Takam team planned the early boxing and late run by design, the hard to believe strategy or adjustment paid off. He felt out Perez and limited his offense. Once Takam realized Perez could not hurt him he sprang into attack and never let up. Hopefully Takam’s efforts earned him something down the line as he showed plenty to be pleased with. Having won in this author’s eyes tonight and having beaten veterans in Michael Grant and Franz Botha he may be someone to watch for. He showed lots of competence and depth in his game tonight. He moved and jabbed early and even showed a tight defense rolling with punches and countering. He showed a varied punch selection using a straight and overhand right as well as a hard right uppercut to the head. He also dug in hard and constant left hooks to the body and sometimes to the head. As the fight drew on he also put more leverage into his clubbing shots. A draw is a hated result in boxing but if there was ever a good draw this was a good draw for Carlos Takam despite having him ahead at the conclusion of the scheduled ten rounds.

For Mike Perez there is lots to consider and wonder about in regard to his odd performance. Abel Sanchez commented afterwards that something was wrong with Perez after the head butt and that he lost focus and went through the motions. This was also his first fight since being involved in a tragic fight with Magomed Abdusalamov which left Abdusalmov in a coma that he has yet to recover from. Perez was also on the receiving end of some very brutal blows in that same fight. Maybe physically and mentally something was taken out of him by the fight. However, Takam earned this fight and there is no way anybody can take away from his performance considering the depth he displayed. Mike Perez came up short tonight and showed some problems tonight but he was in no way exposed. Perez is a fighter of great potential but looks like he needs to shed some of his amateur style and adopt some professional wrinkles to his game. Hopefully he can rebound and become the fighter we all believe he can be.