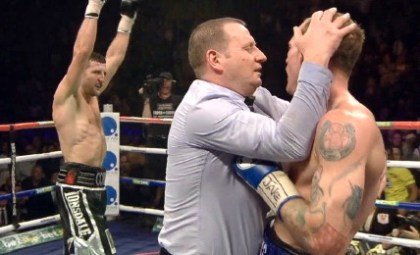 IBF/WBA super middleweight champion Carl Froch (33-2, 24 KOs) appears to be having second thoughts about him walking away from the game in 2015. He’s been talking about retirement since the Lucian Bute fight in 2012, but in the last two years the talk has increased to the point where many boxing fans believed that he would retire after a proposed farewell fight against Julio Cesar Chavez Jr this year.

Froch now feels like he can continue fighting, and he’s talking about the Chavez Jr and even showing sudden interest in a possible James DeGale fight.

“Let’s say I get that fight at the beginning of March, which is being talked about, I beat Chavez in style and I feel great doing it, why would I retire?” Froch said to Skysports.com. “I’m not 47, I’m 37. I still feel fresh, I still feel fit. As long as I can still do what I need to do physically then I’ll continue to box,” Froch said.

The trouble with this is if Froch loses to Chavez Jr in March instead of beating him. Will Froch want to continue fighting or will he decide the loss was too much of a crushing blow to his ego for him to continue on. There’s no guarantee that Froch can beat a fighter like Chavez Jr, because he’s a lot younger than Froch at 28, and he’s a completely different fighter compared to the guys that Froch has fought his entire career.

Chavez Jr is a devastating body puncher with good size and an iron chin. He’s not someone who can’t fight on the inside and falls over as soon as Froch traps them on the ropes.

Chavez Jr doesn’t let himself get backed up to the ropes, and he’s probably going to be able to handle anything Froch can dish out. The question is will Froch be able to handle 12 rounds of hard body shots from Chavez Jr without wilting?

If Froch does continue fighting into next year and beyond, he’s got a lot of interesting options available to him. He can fight James DeGale, George Groves, Mikkel Kessler, Andre Ward, Sergey Kovalev, Adonis Stevenson, Jean Pascal, Bernard Hopkins and Gilberto Ramirez. Those fights would all bring good money for Froch on pay-per-view if he’s willing to take on those tough guys.