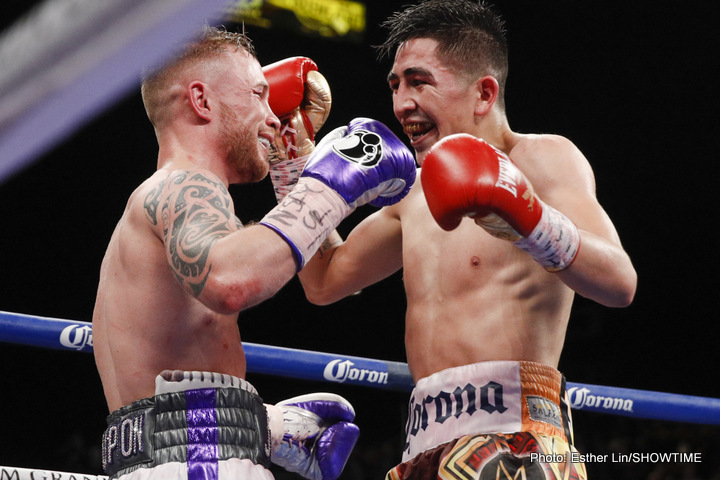 Carl Frampton, 25-1(14), beaten only by Leo Santa Cruz. Santa Cruz, 35-1-1(19), beaten only by Frampton. Together, these two magnificent featherweights gave us two superb 12-round fights that were full to the brim with action, excitement and boxing skill. All we need now is a deciding fight, a rubber-match.

It didn’t take very long at all, just after their first great fight had ended in fact, for fight fans to begin talking about the possibility of these featherweight warriors engaging in the sport’s next great trilogy. Yet here we are, over a year-and-a-half on from Santa Cruz’ revenge points win over the Belfast man, and we are still waiting – for any word on the third fight. As great as fights one and two were, it’s been a case of too quiet, too silent. Simply put, the third fight has to take place. Speaking shortly after the announcement of his August 18 fight, a defence of the WBO interim belt he won last time out by beating Nonito Donaire, Frampton said that he is the only fighter “making noise” about the third fight, that it “doesn’t look like happening any time soon.”

Frampton must beat Luke Jackson first, but then he says he very much wants to “settle” the rivalry with Santa Cruz. Santa Cruz gave us another terrific fight on June 9, when he decisioned Abner Mares in a rematch. Will the reigning WBA champ look to the third fight with Frampton next? We all hope so; even if Frampton says he feels it will have to wait until some time in 2019. We will wait.

Fights one and two were fantastic and it is perhaps fitting that both battles went down to the wire, each man emerging with a close points victory. The styles of these two fighters compliment each other so well, the rubber-match cannot fail to disappoint.

Before his rematch win, Mexican warrior Santa Cruz promised he’d come to Belfast to give Frampton a third fight. Frampton has said a number of times how he hopes Santa Cruz is a man of his word. There is absolutely no reason to believe he isn’t. But who wins the third fight and with it the trilogy?

Can Frampton come up with another game-plan, the way Santa Cruz did in the second fight, or will the third fight be a duplicate of the first one: a classic slugfest that either man may edge on the cards? Could we even see a draw in fight-three? Maybe, and perhaps this would be the most fitting result possible. Both fighters are nip-and-tuck, they are both full of respect for one another, and they both enjoy giving the fans great fights. If they did end up all even at 1-1-1, there would probably be no complaints from either fighter; or from their millions of fans.

Bottom line: it don’t matter what the result of the third fight is – just as long as there IS a third fight. We need it.