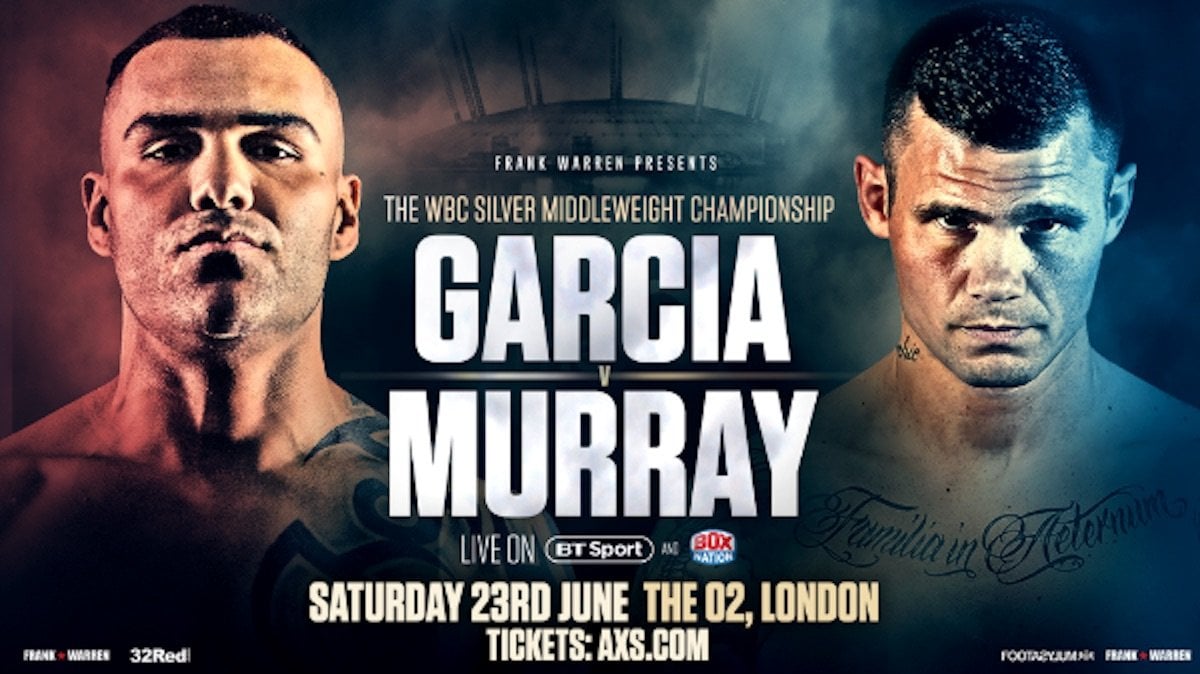 The likely prize for the winner is being made mandatory challenger for WBC world champion, Gennady Golovkin.

“There is a bit of football on, but this is a good ﬁghting bill with competitive ﬁghts. “There have been changes to the card with Billy Joe Saunders pulling out, but we have worked hard to secure a good opponent for Martin and we have done that. Martin is one of the stalwarts of British boxing and always in good ﬁghts, but he cannot afford to lose this ﬁght. It’s a cracking ﬁght between two very good ﬁghters and the winner becomes an A side attraction. “Anthony Yarde was offered a ﬁght with Kovalev but we turned it down. He needs that experience. The objective is to win it and defend it. Each time he ﬁghts he will step up. “Daniel Dubois is the best young heavyweight I have been involved with.”

“I have always been on the B side and built a career of pulling off upsets. This is something I’m used to and I am the last throwback ﬁghter. We thought we had the Gennady Golovkin ﬁght a couple months back, and it has been frustrating. I told Don King I wanted a big ﬁght and I pleaded for a big ﬁght and he got this overnight. I have a lot to ﬁght for and I need this ﬁght more than Martin. I go hard, as hard as I have to.”

“When Billy Joe pulled out I thought I would’t ﬁght, but getting a meaningful ﬁght means a lot. I was gutted that Billy Joe pulled out, but never took my eyes off the ball. Garcia was calling for the ﬁght on Twitter and he can bring that. He is the opposite of Billy Joe and I won’t have to go looking for him. It is about levels and I will show that on Saturday. Being so close before in world titles makes me more hungry and determined. As soon I feel I can’t offer anything to the sport I will gone.”

“I don’t know too much about Dariusz, but I go out and do my job. It doesn’t matter if he is southpaw, northpaw or westpaw. Sparring with southpaws have been different but nothing to worry me. When you have power, that relaxes you. I am not thinking this is a pushover. People talk about world title offers, but boxing is not a sprint, it’s a marathon.

“I am looking forward to the ﬁght and I will win. I have seen his ﬁghts and we have adapted our training techniques to win the ﬁght on Saturday. I will keep my distance and show him how it is done.

“I don’t like or dislike Tom, but I am ready to do the business. I am prepared to ﬁght whether it ends in the ﬁrst round or last. He can try what he wants I am ready for it. Tom is a weak man mentally and I will show that. He is nothing.”

“I’m much more than a four day notice man coming to pick up a pay cheque. I will be drilling that rib cage and I will drown Daniel very slowly. I should have bought him armbands. He is going to get welcomed to a man’s world. This ﬁght is way too early for Daniel. I am not the superstar and have zero pressure. He is the one who has got to impress. When it gets down and dirty I will be the tougher. I’ve dreamt of this chance and will not put it to waste.”

“This guy is bum. He gives a story of coming up the hard way but we all did. This is an easy ﬁght, a walk in the park. I am smarter than him and all I need is a ring IQ. He is gonna get beat, paid and be on the next ﬂight back to Congo. I am gonna eat as much food as a I can after I win. When he is on a plane home and I have crushed his dreams I will be on a plane to Marbella celebrating. It will be so easy I will tell him what shot I am going to throw. When I beat him I want Jack Catterall.”

“I don’t share the same sentiment as many do regarding Ohara’s boxing. He is average at best. It is a short notice ﬁght for me, but I don’t see him going ten rounds. I am going to do the British public favour. I am no replacement coming for a payday. I am not a champion by luck and I will put this kid away.”

Roberto Garcia will defend his WBC Silver Middleweight title against Martin Murray at The O2 in London on June 23, live on BT Sport and BoxNation.

Murray will be looking to put the frustrations of missing out on a shot at the WBO Middleweight World Title behind him when he challenges Mexico’s 41-3 Garcia later this month.

Garcia is currently enjoying a 13-fight winning streak that stretches back to 2010 and will be heading to London full of confidence.

“I was gutted about Billy Joe Saunders pulling out of our fight for a second time but this is a great replacement,” said Murray. “Roberto Garcia is the Champion and he’s willing to travel to the UK so we know he is well up for it.

“He’s been calling me out on Twitter for a while and I’m delighted that we’ve been able to make the fight so quickly. This means that several months of hard training won’t got to waste and I’ll be out on June 23 topping a great show.

“A good win against Garcia will put me in a strong position with the WBC so there’s everything to fight for. It has been a frustrating period of my career and I’ll be taking my anger out on Garcia on June 23 before moving on to even bigger fights.”

“I’m not like Saunders,” said Garcia. “I’m not afraid of Murray. I’m willing to risk my title and come to London to beat Murray in front of his own fans. My promoter Don King will be in London to watch me win in style. Let’s get it on!”

Further updates to the card will follow this week.

Murray was scheduled to fight for the WBO Middleweight Championship at the O2 Arena in London, England on June 23, but champion Billy Joe Saunders has pulled out of the fight because of an injury for a second time.

“I’m not like Saunders,” said Garcia. “I’m not afraid of Murray. I’m willing to risk my title and come to London to fight Murray before his hometown fans. Let’s get it on!”

Saunders postponed the originally scheduled April 14th fight with Murray because of a alleged hand injury. Now he is pulling out of the June fight because of an alleged hamstring injury.

“My manager, Lee Holliday, informed me today that my promoter, Don King, has reached out to Warren’s team about making this fight. I have a “have Belt and will Travel” attitude and ready to back it up tomorrow if necessary.

“No more whining about Billy Joe and his excuses. If you want to fight on June 23, then put up or shut up. If not, then you are just Billy Joe with different excuses.”