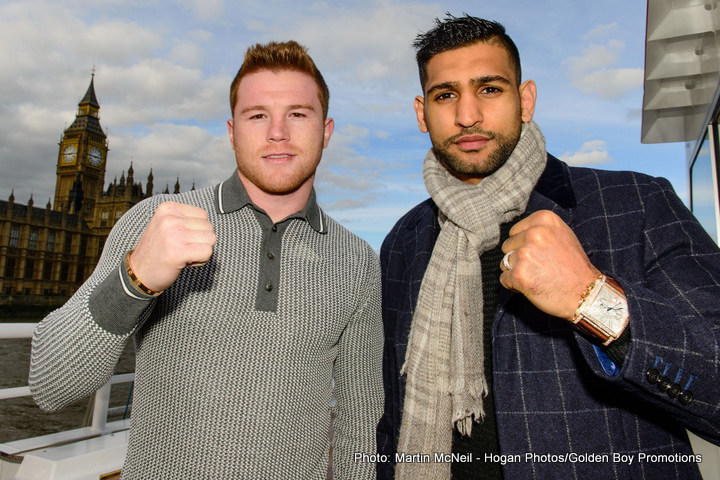 Golden Boy Promotions will exclusively promote the fight in association with Canelo Promotions, with Khan returning to his former home at Golden Boy Promotions for the showdown. The mega-fight promises high-intensity action between two of boxing’s most popular and powerful fighters competing in the primes of their careers. Information regarding, the venue, ticket availability and a press tour for the fight will be announced in the coming weeks.

“As the middleweight champion of the world, I will take on the best fighters in the sport and on Cinco De Mayo weekend, I look forward to making the first defense of my titles,” said Canelo Alvarez. “Amir was a decorated amateur, a two-time world champion and is in the prime of his career. Fans are in for a great fight on May 7.”

“I know Canelo fights the best and wouldn’t pass up the opportunity to face me like others have,” said Amir Khan. “My goal is to always fight the biggest names and the best fighters that is why I’m excited for this fight. Also, I would like to thank my team and Golden Boy Promotions for this opportunity. I know I have the speed and ability to beat him and will give my fans what they deserve on May 7.”

“We are committed to putting on the biggest and best fights in boxing,” said Golden Boy Promotions Chairman and CEO, Oscar De La Hoya. “Canelo is the biggest star in the sport and as he demonstrated against James Kirkland and Miguel Cotto last year, he is only getting better. Those who predicted that he would take an easy fight for his first defense have been proven wrong once again. As for Amir, he has won his last five fights including an incredible performance against Devon Alexander, and now that he is back where he belongs at Golden Boy Promotions, his future is very bright, once again.”

“Pitting power like Canelo’s against speed like Amir Khan’s has been a blueprint for many of the most compelling fights in boxing history and May 7 should be no exception,” said Peter Nelson, Executive Vice President for HBO Sports. “Canelo will either continue his meteoric ascent in the sport, or else Amir Khan will make history to become the lineal middleweight champ. The HBO Pay-Per-View team is thrilled to be producing and distributing Canelo-Khan on Cinco de Mayo weekend.”

Richard Sturm, president of Entertainment and Sports for MGM Resorts International, said, “As the newest sports and entertainment venue in Las Vegas, T-Mobile Arena was designed to host major boxing events including the first-ever fight featuring Canelo vs. Khan. Fight fans will have the opportunity to experience pre-fight activations at Toshiba Plaza as well as the arena’s multiple food and beverage options. We are excited to welcome the two fighters back to Las Vegas and look forward to a great event in May.”

At the age of 25, Guadalajara, Jalisco, Mexico’s Canelo Alvarez, the current WBC, Ring Magazine, and Lineal Middleweight World Champion has conquered the boxing world, captivating fans both at home and around the globe with his action-packed fighting style, charisma and willingness to take on the toughest challenges. The 2015 Fighter of the Year candidate’s road to stardom began in 2011 with a win over Matthew “Magic” Hatton for the vacant WBC Super Welterweight World title, his first title defense against Ryan Rhodes and stoppage victories over Alfonso Gomez and Kermit Cintron. Then in 2012, Canelo defended his belt against future Hall of Famer Sugar Shane Mosley and showed the veteran his first retirement, winning via unanimous decision. Canelo continued on the path to superstardom in 2013 with a fifth round technical knockout of Josesito Lopez, followed by a unanimous decision victory over then world champion, Austin Trout in front of over 40,000 fans at San Antonio’s Alamodome. The victory earned, Canelo the WBA Super Welterweight World Championship and proved his dominance at 154-pounds and a clear, bonafide ticket seller. On September 14, 2013, Canelo faced the man on top of the pound-for-pound list – Floyd “Money” Mayweather – giving a stellar effort before falling short of victory for the first time via 12-round majority decision. The fight ended up being the biggest of 2013, but also the second highest grossing bout of all-time and the second most watched boxing event ever on Mexican television (only behind 2015’s Mayweather-Pacquiao). Since then, Canelo has won four straight fights, defeating top stars Alfredo “Perro” Angulo via 10th round technical knockout and Erislandy “The American Dream” Lara via split decision in 2014. On May 9, 2015, Alvarez dazzled with a victory over the fierce James “Mandingo Warrior” Kirkland at Minute Maid Park in Houston in front of more than 31,000 fans that featured what many have already deemed the “Knockout of the Year.” Finally, On November 21, 2015, Alvarez defeated future Hall-of-Famer Miguel Cotto for the WBC, RING Magazine and Lineal Middleweight Championship in front of a packed arena at the Mandalay Events Center in Las Vegas and more than 900,000 homes across the country. The unanimous decision victory cemented Canelo’s status as boxing’s biggest draw and among the best pound-for-pound fighters in the world.

Bolton, Lancashire, England native, Amir “King” Khan catapulted into the media spotlight after winning the silver medal at the 2004 Olympics in Athens. Khan turned professional on July 16, 2005 with a first round technical knockout victory over Phil Edwards. Since then, Amir Khan has exploded onto the international sports scene. In July 2009, Khan competed for his first world title against Andriy “Kotelya” Kotelnik where Khan was crowned as the WBA Super Lightweight World Champion via a unanimous decision victory. Khan went on to successfully defend the title five times against tough competition in Dmitriy “Star of David” Salita, Paul “Magic Man” Malignaggi, Marcos “El Chino” Maidana, and Paul “Dudey” McCloskey. In July 2011, Khan faced Zab “Super” Judah and added the IBF Super Lightweight World Championship to his collection when he knocked out Judah in the fifth round. The victory was short lived however; as Khan lost a controversial 12-round split decision to Lamont “Havoc” Peterson on December of 2011. The controversy surrounding the officiating prompted a rematch, but that bout was canceled when Peterson failed a pre-fight drug screening. Disappointed but not discouraged, Khan faced Danny “Swift” Garcia in July 2014 for a chance to become a world champion once more but was stopped in the fourth round. Since then Khan has rebounded giving Carlos Molina his first professional loss in December 2012, defeating former IBF Lightweight World Champion Julio “The Kidd” Diaz in April 2013, securing the WBC Silver Welterweight and the WBA International Welterweight Titles against Luis Collazo in May 2014, and defending his titles in spectacular fashion against former three-time world champion Devon “The Great” Alexander in December 2014 and former WBO Super Lightweight World Champion Chris Algieri in May 2015. Now, “King” Khan will be looking to become a world champion again when he faces Canelo on May 7.