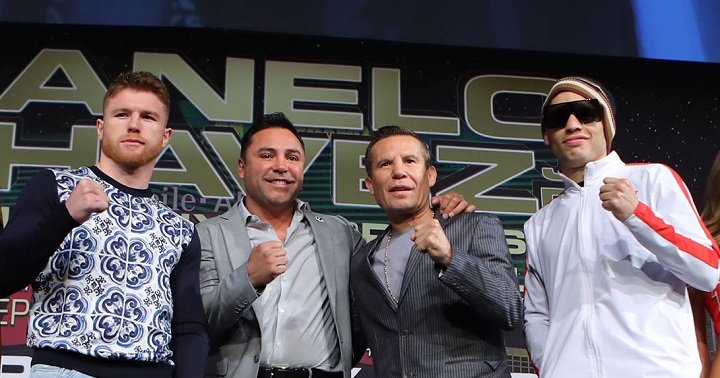 Below is what the fighters and their teams had to sat at today’s final press conference:

“On my behalf, I’m going to do everything on my side to make this one of the most historic fights in Mexico. We will be ready on Saturday.

“Every fight is very important to my career, and this fight is no exception. I’m very happy the fight is here on Saturday.”

“I feel ready and happy that the fight is only a few days away. I came here to win, not just to fight. Everything has already been said; we’ve all spoken; and I’m here to win this great fight on Saturday, May 6.”

“People know this is an all-out action-packed war. We haven’t had a fight like this in years; it’s a true Mexican civil war.

“Given the obvious Cinco de Mayo date and the bad blood between the boxers, I think it is safe to say this is the biggest fight in Mexican history. To give you an idea of how big this event is, let me give you some numbers. This will be the most attended indoor fight in the storied Las Vegas fight history with more than 20,000 in attendance. The fight sold out in 10 days, and we opened up more circuit-viewing theaters for everyone to watch on fight night in Las Vegas at MGM properties. Fight fans in six continents will be able to watch the fight with the HBO platform and streamed live on goldenboyppv.com giving anyone with a phone or laptop the ability to watch.

“I’m happy to be here, and I’m happy Saturday is close. I’ve lived many big moments in my life, and this is probably one of the biggest moments and fights in my life. It’s a big fight for Mexico, but I believe this a fight that can be won-anything can be done in the ring.”

“This fight is a big one because I don’t believe we’ve seen a Mexican fighter face another Mexican fighter with pride, dignity and talent all on the line. I look at this as a very brutal fight because Chavez, Jr. is coming with legacy behind him and to prove what ever has happened in the past won’t happen on Saturday. Canelo is the face of one of the most important months in boxing, and I know he wants to continue that reputation. I look forward to what will happen on Saturday and I tell everyone to pay attention to what will happen.”

“We’ve worked very hard for many years with sacrifices and lots of discipline to get to where we are today. We’ve had a fantastic camp and we’ve done all the hard work to be ready for Saturday night.

“There’s a saying in Mexico that there isn’t a date that wont arrive. The day is here and we are ready This has been brewing more many years, Team Canelo is very confident we will raise our hands in victory on fight night.”

“We have all come together to make this historical event happen. This fight is a very important moment to the history of Mexico. I believe in our lifetime, this fight is the fight of the moment. Both camps have worked very hard and all we can do is watch on Saturday. I’m confident Julio has done everything he can to be victorious.”

“This has been one of the most important camps for me, we have done two months of training camp with many different conditioning and Junior has done very well. We are very confident Junior has trained as well as he can and we look forward to a tremendous fight on Saturday.”

“I’ve been in boxing for 58 years, and I’ve had many big fights here in Vegas. I’m very proud to be with Junior for this fight. We’ve trained very hard for the past two months with Junior and we are ready for victory. I’m with a fighter who is very talented and I know we will do well on Saturday.”

“We are very proud to be a part of making history when we host this fight on Cinco de Mayo weekend. As many of you have noticed, T-Mobile Arena has changed the sports and entertainment landscape in Las Vegas, as we all look forward to Canelo’s return to after his knockout victory over Amir Khan last year. We also look forward to Chavez, Jr.’s first return in five years as he takes on one of the sports biggest champs for this fight.”

“This show is special because it honors the rich tradition of Cinco de Mayo. We know Canelo and Chavez, Jr. will put on a show in the ring-both are very talented, skilled fighters with a lot at stake.

“These are two fighters that have consistently been able to sell out arenas and generate huge pay-per-view buys. In the age of fragmented television sales, something should be said for fighters who can sell these pay-per-views to so many homes. We will see something very considerable on Saturday.”

“For these two Mexican warriors, there is no better time to have these fights. The Nevada State Athletic Commission is ready and padded to go to work. We are a team, and I do a great deal of research and statistical analysis into our officials and I know everyone who has worked under pressure in Las Vegas. We are regulators with no financial interest-it’s strictly business and our number one priority is the fighter. The three judges selected for this fight have over 380 fights with them, and have performed consistently well under pressure.”

(L-R, Former IBF Middleweight Champion David Lemieux and former three-division world champion Yuriorkis Gamboa host a media workout on May 3 at MGM Resort Hotel and Casino ahead of their respective fights on May 6 and May 5 presented live on HBO Pay-Per-View and Golden Boy Boxing on ESPN) 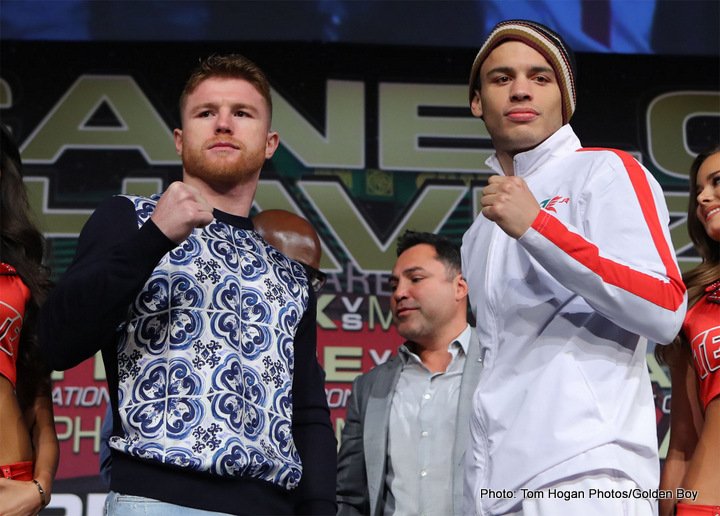 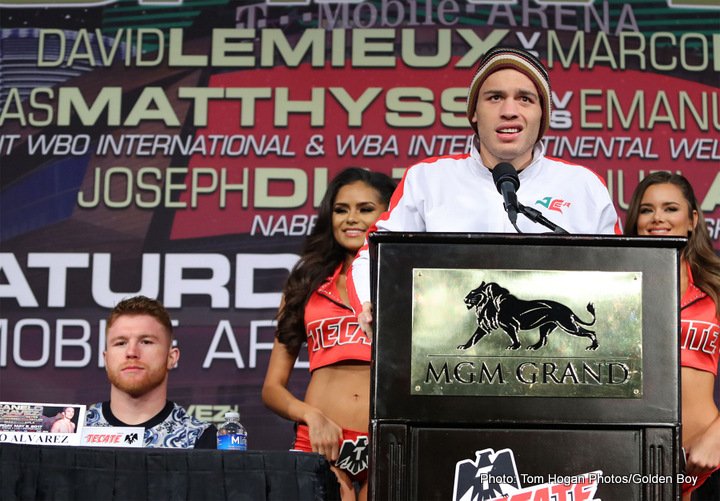 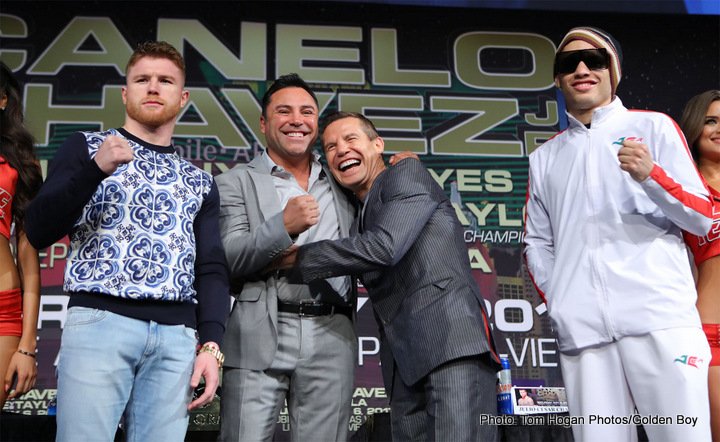 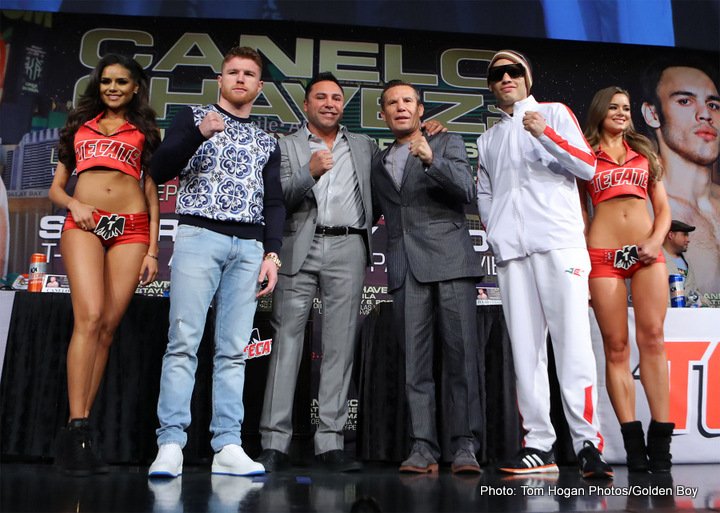 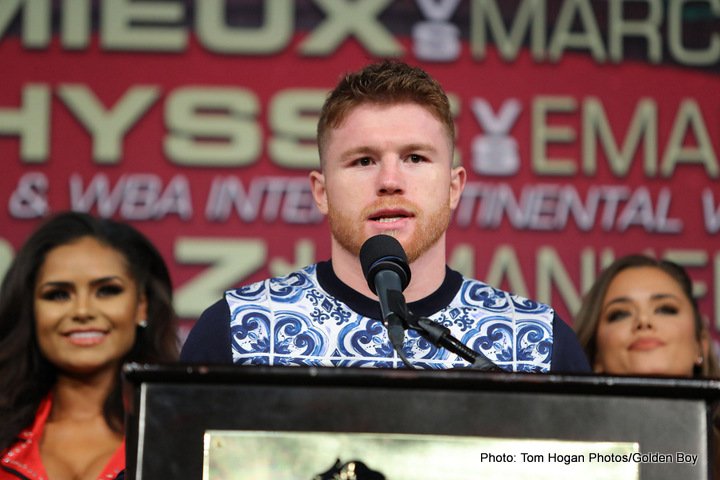 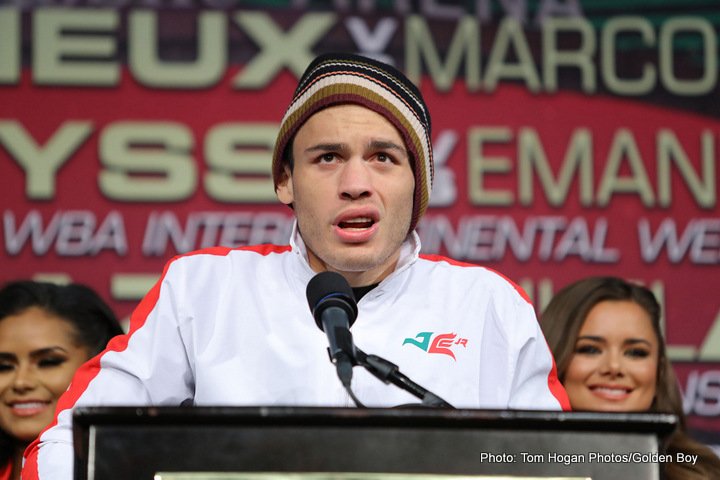 Tickets for the closed circuit telecast of Canelo vs. Chavez, Jr. are priced at
$75, not including applicable fees. All seats are general admission and tickets are available for purchase at any MGM Resorts International box office or concierge desk. Tickets also can be purchased by phone with a major credit card at 800-745-3000. Tickets for “Canelo Alvarez vs. Julio Cesar Chavez, Jr.” in theaters nationwide are on sale now at www.FathomEvents.com or at participating theater box offices. Fans throughout the U.S. will be able to enjoy the event in select movie theaters through Fathom’s Digital Broadcast Network (DBN).

Photos and videos are available to download by clicking here or copying and
pasting the link http://bit.ly/Canelo-ChavezJr into a browser. Credit must be given to Golden Boy Promotions for photos and videos used.

Golden Boy Boxing on ESPN: Gamboa vs. Castellanos is a 10-round lightweight fight presented by Golden Boy Promotions in association with ZR Entertainment and sponsored by Tecate BORN BOLD. ESPN Deportes will transmit the fights live on Friday, May 5 from the MGM Grand Garden Arena at 4:00 p.m. PST/7:00 p.m. EST, and ESPN2 transmission will begin at 5:00 p.m. PST/ 8:00 p.m. EST.

Tickets starting at $10 for Golden Boy Boxing on ESPN are on sale now and include complimentary VIP reserved seating at the Canelo vs. Chavez, Jr. Weigh-in. Ringside seats for fights only are priced at $30. To charge by phone with a major credit card, call the AXS Contact Center at (888) 929-7849 or MGM Resorts Call Center at (877) 795-2564. Tickets are also available for purchase online at www.axs.com or www.mgmgrand.com and in person any MGM Resorts International box office.