Trainer Robert Garcia predicts Canelo Alvarez will retire Gennadiy Golovkin in their trilogy fight on September 17th, and likely stop him with a body shot in the later rounds.

Robert sees this fight as the “last payday” for Golovkin, but he expects him to make a huge amount of money to go along with his massive fortune. According to Celebrity Net Worth, Golovkin’s net worth is estimated at $30 million.

With the money Golovkin has, it’s debatable whether he still has the hunger to fight hard enough to beat the superstar Canelo when the going gets tough on September 17th.

We haven’t seen Golovkin fight anyone that you can call a good fighter since his loss to Canelo in 2018. It seems that Golovkin has taken easy fights, waiting for Canelo to give him the trilogy payday that he’s been waiting for.

“People love him and he looks like a good person,” said Robert Garcia to Little Giant Boxing about Gennadiy Golovkin. “I think that’s what’s going to happen. GGG is already 40,” said Robert when told that Canelo said he’s going to “retire” Golovkin.

If your Golovkin, he’s getting Canelo at the ideal time with him coming off a one-sided loss to Dmitry Bivol last May. That loss may have taken something away from Canelo’s self-confidence, making him more susceptible to getting beaten.

Even if Canelo is still feeling confident, Golovkin has a good blueprint to follow to defeat him now. If he can do some of the same things Bivol did, he could win.

But that would require Golovkin to throw combinations, something he’s not consistently done throughout his career, particularly in his two fights against Canelo.

“This is his last big payday. GGG is a big name. He makes a lot of money. Of course, isn’t that retirement money?” said Robert when told that Golovkin could make $30 million for the trilogy match with Canelo. “All the money he’s already made.

“It’s going to be hard. It’s going to be difficult to say that ‘Canelo is going to knock him out easy’ because GGG is a great fighter. I do think Canelo will break him down with body shots and maybe stops him in the later rounds.

“I think Canelo wants the rematch [with Dmitry Bivol]. He could stay at 168 and fight other guys, Charlo and Benavidez, but he wants the guy [Bivol] that beat him. I got to respect that.

“Who knows if it’s just in front of the cameras, but how does Canelo know the opposite also? How does he know he’s not a great person?

“Unless he knows him personally somehow, but from what I see and what I notice, people love GGG and GGG is always nice to everybody. When I see him, he’s very nice to my team and everybody. I can’t say anything negative about him,” said Garcia. 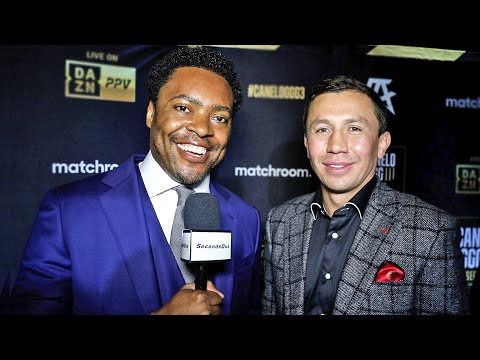